LYNCHBURG, Va. (RNS) — When Tony Campolo began his altar call in Lynchburg, he embellished his spiritual charge in a way not often heard in evangelical services.

“Are you ready to say ‘I’m going to commit myself to Jesus,’” Campolo asked as many rose to their feet, some closing their eyes and raising their hands in prayer, “I’m going to be committed to the poor? I’m going to stand up for the refugee? I’m going to speak for those who feel oppressed by our society?”

Campolo, a leader of the Red Letter Christians advocacy group, knew his audience would appreciate that call, made Saturday (April 7) at the Red Letter Revival, a two-day gathering organized by progressive evangelical leaders near the campus of evangelical Liberty University.

In Lynchburg they aimed to fellowship, and to reaffirm their values — but also to serve as a thorn in the side of those who promote a conservative brand of their faith that has aligned itself with President Trump. (More than 80 percent of white evangelicals voted for the president.)

They organized to pray against “toxic evangelicalism,” and to offer a spiritual challenge to Liberty President Jerry Falwell Jr., whose steadfast support of Trump has drawn fierce criticism from other people of faith — and, in their view, not nearly enough evangelicals.

But those who sang and prayed over the weekend said they appreciated how the gathering was framed as an alternative to the theology of Falwell. One of the speakers, evangelical author Jonathan Martin, was escorted off Liberty’s campus by police in October while attending a concert days after calling for a peaceful protest of the school. In the months leading up to the revival, Martin referred to Falwell’s leadership style as “authoritarianism,” and the Rev. William Barber II — for many the most important leader of the religious left today — said Falwell is “justifying the GOP’s immorality” in the “same way” slaveholders used the Bible to justify slavery. 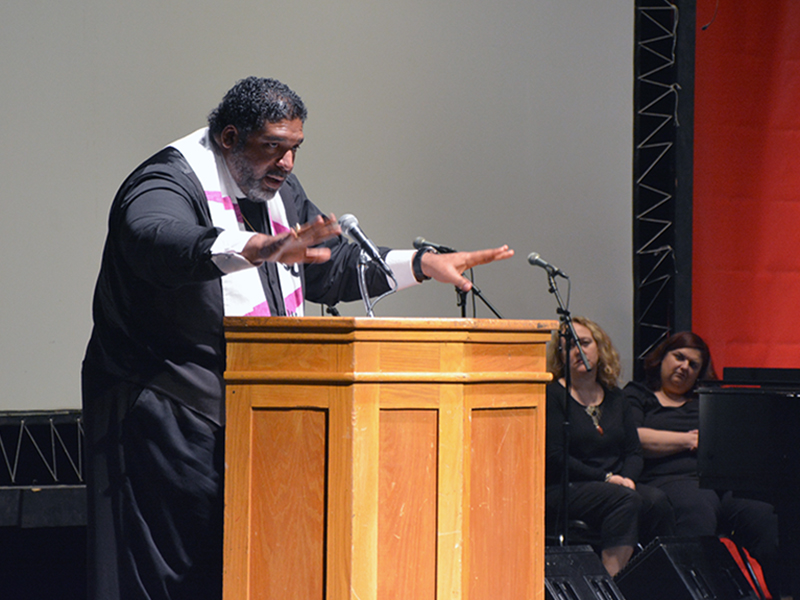 Similarly, sermons and slam poems at the revival included lengthy discussions of political topics, such as sexuality, white supremacy, and mass incarceration. There were also multiple condemnations of Christian nationalism, which the Rev. Brenda Brown-Grooms, a pastor from Charlottesville, Va., declared “apostasy.”

Each speaker tied their subject back to faith.

“I came to announce tonight that I am a theological conservative,” said Barber. He chided right-wing religious leaders and their support for policies he says hurt the poor, saying, “they call themselves conservative, but they liberally resist so much of God’s character.”

Others railed against conservative pro-gun arguments.

“Some evangelicals are more committed to the amendments than the commandments,” said the Rev. David Anderson, a Maryland pastor, triggering a chorus of amens.

For many in attendance, the speaker and workshop lineup itself functioned as a de facto critique of white evangelical Protestantism, featuring voices often underrepresented in evangelical circles — women, Native Americans, African-Americans, Hispanic-Americans, and LGBT people. 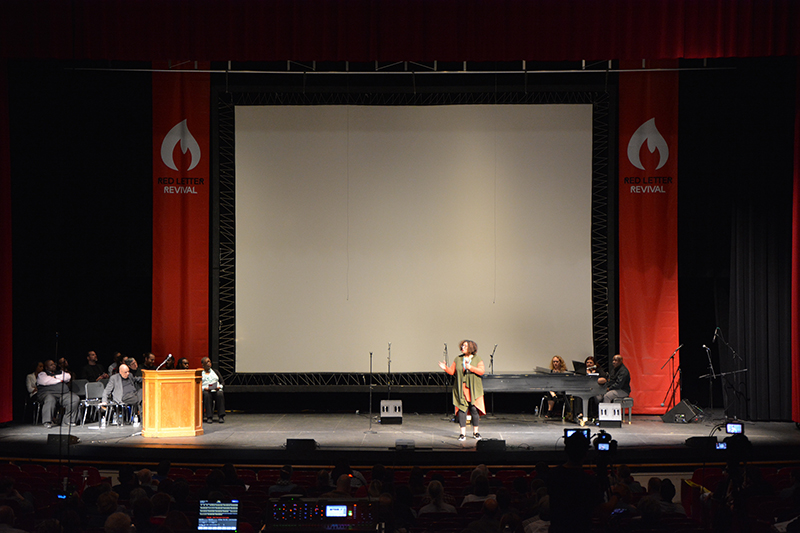 Lisa Sharon Harper addresses the crowd at the Red Letter Revival, which drew roughly 300 to 350 people to the E.C. Glass High School auditorium in Lynchburg, Va., on April 6, 2018. RNS photo by Jack Jenkins

Lisa Sharon Harper, who was among the faith leaders who protested white supremacists during the violent demonstrations last year in Charlottesville, said the focus on race and marginalized voices wasn’t a coincidence.

“Evangelicals continue to champion (President Trump), and the clearest manifestation of that is Jerry Falwell Jr.’s support for the president,” she said in an interview. “There is no way that we can look at his presidency and not see the manipulation of the political construct of race in order to secure the supremacy of whiteness, and that itself is an assault on the image of God.”

A strategy of “exposing injustice”

Despite the rhetoric against Falwell, author and revival organizer Shane Claiborne said the Red Letter Revival was not designed  to “vilify” him, saying “we’re not here to protest, we’re here to pro-testify!”

Campolo also drew a distinction between religious disagreement and personal attacks, noting that Jesus’ disciples often had heated disputes. He pointed to his own televised debates with Jerry Falwell Sr. — Jerry Falwell Jr.’s father — as proof that theological sparring partners can disagree respectfully. 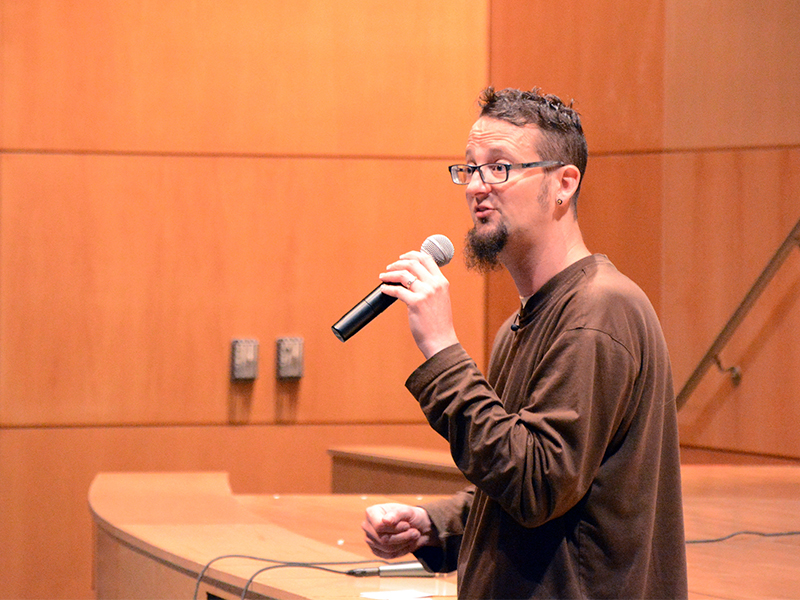 Falwell Jr. has taken a hard line with the group’s leaders, but remained mostly quiet about the weekend’s events. He has not replied to the group’s request for a formal debate, they say, and personally stifled efforts by the Liberty student newspaper to cover the revival, according to a student editor. Falwell did not respond to Religion News Service’s request for comment but provided a statement to the local Lynchburg newspaper, The News & Advance, which was included in a story about the event.

According to Claiborne, Liberty police also sent him a letter last week threatening fines and jail time if he visited the Liberty campus to pray with students or Falwell — which Claiborne says he requested in advance. 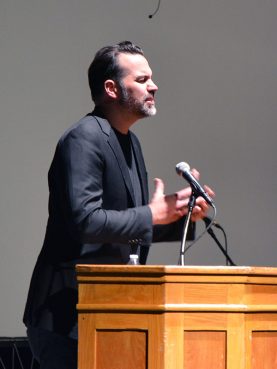 “What Dr. Martin Luther King talked about is that sometimes we’ve got to expose injustice so that it becomes uncomfortable,” Claiborne said, noting they ultimately hand-delivered prayers for Falwell to his brother’s nearby church. “I think discomfort can be a good thing — our goal is certainly not to antagonize, not to manipulate, not to be inauthentic. But our goal is to expose some of this stuff.”

Highlighting tensions may prove to be an overarching strategy of the group, which holds little sway in more mainstream evangelical circles. Organizers say they may hold a similar gathering later this year in Dallas.

The city is home to the Rev. Robert Jeffress, a controversial pastor and religious adviser to Trump. Jeffress preached a sermon to the president entitled “When God Chooses a Leader” on Inauguration Day, and had his choir sing a song entitled “Make America Great Again” to celebrate the Fourth of July.

Many at the revival expressed frustration with modern evangelicalism, sometimes detailing a feeling of alienation.

“They’re placing the priority on the wrong things,” said Chris Miller, who drove 12 hours from Bluffs, Ill., with a friend to attend the event and used to work in an evangelical church.

The revival, by contrast, was widely seen as refreshing among the progressive crowd.

“I think we’re celebrating a new movement, and I’m very happy about it,” said Marianne, a Lynchburg resident who did not share her last name.

Liberty students were also present throughout the event, often sitting together in the crowd. Senior Sam Herrmann introduced Jonathan Martin, who he originally invited onto campus, on Friday evening. Brandan Robertson, left, listens as Nathanial Totten, right, speaks during a LGBTQ+ Christians and their allies workshop at the Red Letter Revival in Lynchburg, Va., on April 6, 2018. RNS photo by Jack Jenkins

The students voiced their own frustration with Falwell’s administration, which Herrmann said exhibits “toxic Christian nationalism.” Two seniors at the school — Nathanial Totten, an openly gay Liberty student who led a workshop at the revival, and Elliot Green — pointed to a specific moment in 2015 they say distanced them from Falwell: when he stood before the student body and responded to news of a terrorist shooting by reaching for a firearm he claimed to have holstered in his back pocket, suggesting students should carry guns so “we could end those Muslims before they walk in.”

“That was probably the moment that my awareness shifted to ‘this isn’t good, this isn’t okay,’” Totten said in an interview.

Participants said it’s still too soon to say whether the revival was a success, or what success even looks like.

Some of the movement’s contours have yet to be delineated. Preceding this weekend’s event was a social media debate over whether organizers were affirming of LGBT identities and relationships. While the revival ultimately included LGBT speakers, it remains unclear whether disagreements on the topic could split the budding movement. Strategic questions, such as how far to push their activism or how to approach reticent leaders like Falwell, also remain unresolved.

But for the few hundred who came to Lynchburg to assert a different sort of evangelical activism, the Red Letter Revival offered hope.

“Too many evangelicals hold these beliefs in their heart and don’t show up,” said Lisa Sharon Harper, speaking of those who criticize Falwell and his ilk. “(But) I think people are going to show up now.”