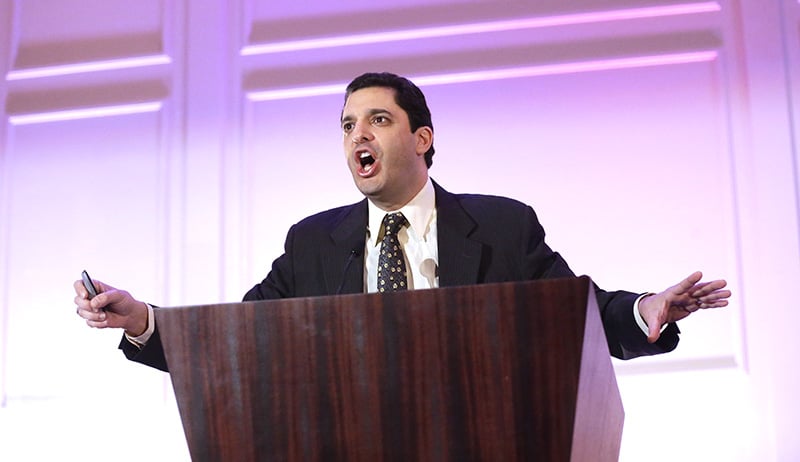 (RNS) — American Atheists, one of the most combative organizations dedicated to the promotion of secularism, has terminated its highly visible president, David Silverman, over allegations of financial and sexual misconduct.

Silverman, through his lawyer, denied the accusations.

American Atheists’ board announced the move on Friday (April 13) hours before the website BuzzFeed News published a story detailing the allegations of two women who say Silverman, 51, had nonconsensual sexual contact with them.

“We take our obligation to create safe and welcoming communities for our staff, volunteers, members and supporters very seriously,” Nick Fish, American Atheists’ national program director, said in a statement issued after the BuzzFeed article’s publication. “We have zero tolerance for the type of behavior alleged in these accounts. We will continue to demand the highest standards and accountability from our leaders, staff, and volunteers.”

The move to terminate Silverman came two days after American Atheists announced it was placing him on paid leave while it investigated his financial conduct related to the promotion of his 2015 book, “Fighting God: An Atheist Manifesto for a Religious World,” and the appointment to American Atheists’ staff of a woman Silverman was allegedly sexually involved with.

David Silverman at the U.S. Capitol in June 2017. RNS photo by Kimberly Winston

The two women cited by BuzzFeed News came to American Atheists with their complaints after the organization announced its decision to investigate him. They had approached BuzzFeed News with their allegations earlier.

According to BuzzFeed News, one of the two women — who the news outlet identified only by an initial — said Silverman assaulted her in his hotel room following the American Atheists convention in Memphis, Tenn., in 2015.

“He physically pressed me to the wall and began to kiss me forcefully, grabbed my breasts, and put his hand into my leggings where there was actual penetration of my vagina,” she writes in the complaint delivered to American Atheists along with pictures she says are of bruises she sustained at Silverman’s hands.

The encounter ended, she recounted, when she made it clear she did not consent.

The second allegation relates to a 2012 incident at the annual convention of the Secular Student Alliance, an organization for secular college students, in Columbus, Ohio. Rose St. Clair, then a college student and SSA member who hoped for an internship at American Atheists, related that she met Silverman at a bar, became intoxicated, and accepted his invitation to his hotel room.

“I don’t believe I was in a position to be able to give consent. I was very intoxicated,” St. Clair told BuzzFeed. She maintains they had unprotected sex.

“I felt my interest in working for the organization was used as a way for him to have power so that I would have sex with him,” St. Clair said.

The news of Silverman’s dismissal is a serious second blow to organized atheism, which has long struggled with charges of sexism and discrimination. In February, similarly explosive allegations were made against Lawrence Krauss, a prominent scientist at Arizona State University, best-selling author and popular speaker at atheist and skeptic events.

Silverman started with American Atheists in 1996 and became president in 2010. He helped raise the organization, which was started by Madalyn Murray O’Hair in 1963, to greater visibility than it had enjoyed in decades — with billboards in Times Square, lawsuits against Ten Commandments monuments, rallies on the National Mall and frequent appearances on Fox News.

Reaction in the atheism community has been glum. Kevin Bolling, the executive director of Secular Student Alliance, said in a statement that SSA “fully support(s) the courageous and brave women and men who have come forward to tell their own stories and support and share witness to those who have been deeply affected.”

Users of social media have not minced words. Some on Twitter have gleefully cheered Silverman’s plight, others have sadly lamented it, while still others have been more reflective.