NAIROBI, Kenya (RNS) — The Church of Jesus Christ of Latter-day Saints will break ground for a temple in Nairobi to serve its growing number of East African followers.

The church confirmed the plan this week during the visit of its president, Russell M. Nelson. The new leader — installed in January after the death of former President Thomas S. Monson — made Kenya his third stop on a global tour that church officials bill as an effort to connect with the faithful.

The 16 million-member church’s growth is positive but slowing in the U.S., where it is headquartered in Salt Lake City. Growth is also slowing abroad but stands at about twice the U.S. rate. Construction of a temple — a setting for key Mormon blessings allowed nowhere else — is a sign that the church has established strong roots in a region.

There are 159 Mormon temples worldwide, and the planned Nairobi temple is one of 30 more announced or under construction. Nelson referred to the church’s early prophets when he told a group of Mormons and guests Monday (April 16) in Nairobi:

“You perhaps don’t think of yourself as pioneers, but you’re just as much pioneers here now as Brigham Young and his associates were following the martyrdom of the Prophet Joseph Smith in the 1800s,” Nelson said, according to the church. (Smith founded the faith in 1830 in New York state. Young led Mormons to the American West.)

“Membership in the continent of Africa is about the same as it was for the whole church in the year I was a boy,” Nelson added during an address broadcast to Mormon congregations throughout Kenya.

About 540,000 Mormons live in Africa, according to the church. 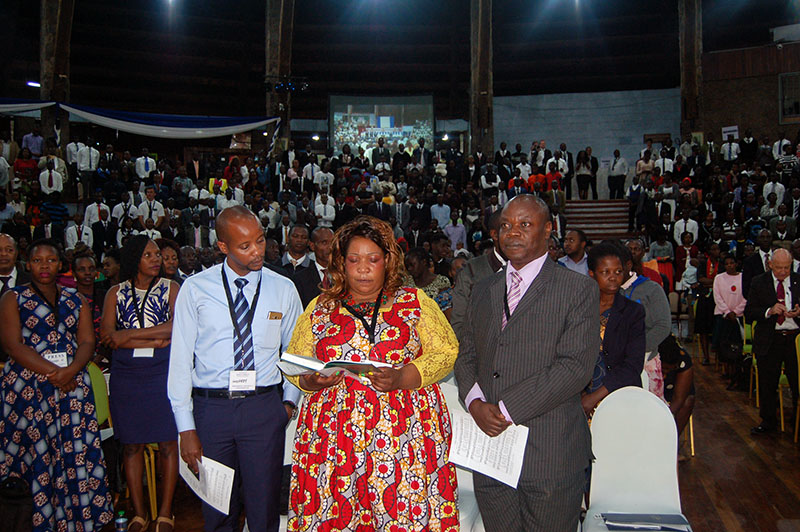 The future temple in Kenya, home to more than 13,000 Mormons, will be the eighth in Africa. Three temples are already open on the continent: in Accra, Ghana; Aba State in Nigeria; and Johannesburg, South Africa.

Another two temples —  in Kinshasa, Congo, and Durban, South Africa — are under construction. New temples have also been announced for Abidjan, Ivory Coast, and Harare, Zimbabwe, where Nelson traveled to after he left Kenya.

Elder Jeffrey Holland  — a member of the Quorum of the Twelve Apostles, the top governing body of the church — accompanied Nelson on the trip and also addressed the gathering in Nairobi.

“It will be awhile before it’s up, but plan to attend when you can; plan to make that a highlight of your life as often as circumstances and finances and transportation will allow. Nothing will bless you more,” he said.

Mormon blessings or ”ordinances” include the baptism of ancestors and the “sealing” of marriages and families, so they may — Mormons believe — live together after death. These ordinances can only happen in a temple.

Now, East Africans who want to participate in these ordinances have to travel far to the nearest one, said Evelyn Jepkemei, the director of the church’s Coordinating Council of Public Affairs in Kenya and Tanzania.

“Members have been traveling to South Africa … but not all can afford the cost. They want the temple to be part of their worship,” Jepkemei told reporters gathered for Nelson’s speech.

Construction of the Nairobi temple is “part of the vision to ensure that all saints (members) have access to a temple,” she said.

According to Ellis Mnyandu, the church’s international director of public affairs for the Africa Southeast Area, it takes three to four years build a temple. They are often grand, multistoried structures, and only LDS members may enter once temples are consecrated.

He said that while a site for the Nairobi temple has been selected, its location has not been made public. “We can only project that the temple will be dedicated about 2021. It will be one of the smaller designs,” said Mnyandu.

The LDS church, which is organized into wards (single congregations) and then stakes (usually five to 10 wards), has two stakes in Kenya and three in Uganda.

Mormon missionaries first arrived in Kenya in the 1980s amid suspicion, and the faith group was shunned as a cult and anti-Christian. Mormons call themselves Christians but differ from other denominations in several ways, including that their Book of Mormon is, along with the New Testament, a sacred text, and that the head of the church is considered a prophet.

But the group has gained acceptance in East Africa and registered with the Kenyan government in 1993. The church carries out humanitarian and disaster relief work, supporting health, clean water, immunization and food programs, among others.

“The humanitarian capacity is endless. It is going on all the time,” said Sister Lillywhite, one of the church’s missionaries in Kenya.

News
‘Give Me My Colored Coat’: Donny Osmond performs wedding in amazing technicolor dreamcoat
Opinion
How coronavirus lockdowns in the US starve vulnerable abroad
News
Amid pandemic, the Wichita Kenyan community unites virtually through food and family
Beliefs
Christians across traditions call for a Good Friday fast in response to pandemic
Opinion
International Women’s Day should celebrate invisible women, too — like my mother
© Copyright 2020, Religion News Service. All rights reserved. Use of and/or registration on any portion of this site constitutes acceptance of our User Agreement and Privacy Policy, Privacy Statement and Cookie Notice. The material on this site may not be reproduced, distributed, transmitted, cached or otherwise used, except with the prior written permission of Religion News Service.