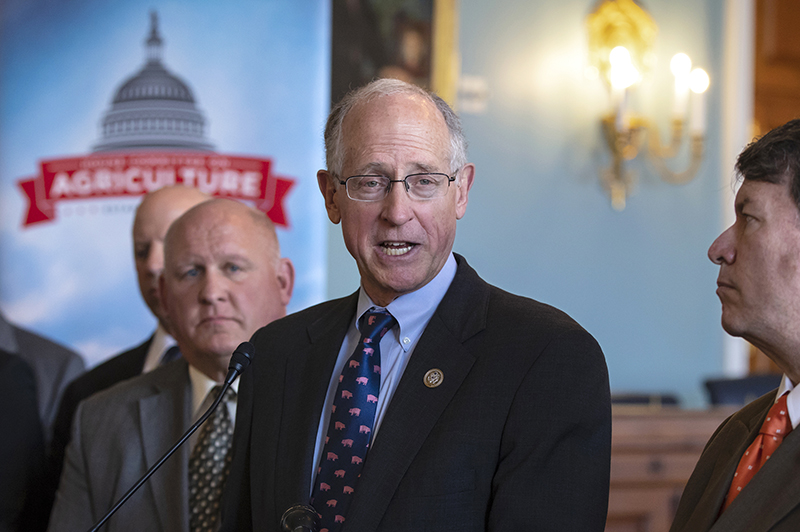 (RNS) — There’s a popular parable in the Gospel in which Jesus, surrounded by a hungry multitude, asks his disciples to share with the masses what they have to eat. Although they produce only a few loaves of barley bread and a couple of fish, Jesus miraculously distributes enough food to feed thousands and still have 12 baskets left over.

There’s a lesson in this Bible story about sharing, but it’s clear that lesson has been lost on too many of our elected officials. Rather than a fair and moral distribution of our common resources to ensure everyone has enough, our current leaders continue to embrace economic inequality by taking from those already struggling to make ends meet so they can pile more riches on the wealthy and corporations.

In Washington, D.C., for example, the House Committee on Agriculture earlier this month released the 2018 farm bill, which was cobbled together by Republicans and calls for major funding reductions that would slash access to nutrition assistance for millions of families, impose unfair work requirements on people who already are struggling, and burden states with greater administrative costs.

The farm bill in part funds SNAP, the Supplemental Nutrition Assistance Program, also known as food stamps, which assists some 41 million people and keeps about 8.4 million out of abject poverty. But this oppressive proposal puts the well-being of those who need the most support from SNAP — children, senior citizens and people with disabilities — in jeopardy. “Miracle of the Bread and Fish” painting by Giovanni Lanfranco, created between 1620 and 1623. Image courtesy of National Gallery of Ireland/Creative Commons

Moreover, President Trump signed an executive order two weeks ago that would have a detrimental impact on people who receive federal benefits such as food stamps and Medicaid. The order, titled “Reducing Poverty in America by Promoting Opportunity and Economic Mobility,” contends that many federal programs created to help families have instead “delayed economic independence, perpetuated poverty, and weakened family bonds.”

Add to this lack of compassion for the least of us the new federal tax law Congress members and the president approved in December. It is another example of what the Bible admonishes us not to do. The law contains $1.5 trillion in tax breaks, 85 percent of which go to the richest Wall Street corporations and the wealthiest 1 percent of households. Many of those tax breaks are paid for by repealing parts of the Affordable Care Act, which will leave 13 million more people without health insurance and increase premiums for some families by over $2,000 a year.

At the same time, the tax law gives a hefty reward — a reduction in tax rates to 21 percent from 35 percent — to prescription drug and health insurance companies that have been making huge profits by gouging consumers over the past decade. UnitedHealth, for example — the country’s largest insurance company — will reap a $1.7 billion tax break annually.

Taxes are our collective investment in the things we all need — health care, roads, education, safety, etc. — to share in the nation’s prosperity. Large corporations making record profits are big beneficiaries of that prosperity and should be asked to pay their fair share of taxes to support it. But instead, thanks to the new tax law, that money will line the pockets of rich shareholders and executives.

This kind of hoarding of the nation’s abundance comes at a cost. The tax breaks for Wall Street and the rich will increase the deficit by $1.9 trillion over the next 10 years, according to the latest reports. President Trump’s budget proposes trillions more in cuts to health care, education, food stamps, disability services, housing and much more to address the growing deficit.

The parable of the loaves and fishes teaches us that there is enough for everyone and even some left over when we share. Unfortunately, the stewards that we have entrusted with distribution when it comes to taxes don’t share those values.

Politicians who approved this law, which takes from struggling families to give more loaves and fish to those already gorged and bloated with plenty, haven’t just created a fiscal deficit. They’ve exposed a moral one.

(The Rev. James H. Willis Sr. is president of the American Baptist Churches of Ohio, president of  Toledoans United for Social Action and pastor of St. Paul Missionary Baptist Church in Toledo. The views expressed in this commentary do not necessarily reflect those of Religion News Service.) “The Miracle of the Loaves and Fishes” by James Tissot, created between 1886 and 1894. Image courtesy of Brooklyn Museum/Creative Commons