(RNS) — We might seem like an unlikely pair — one of us is the Jewish head of Americans United for Separation of Church and State and the other is a Christian ethicist and president of the American Academy of Religion. But we are united in our concern about the grave harms caused by President Trump’s Muslim ban. On Wednesday (April 25), the Supreme Court heard arguments in a case challenging it. The ban should be overturned.

On Dec. 7, 2015, then-candidate Donald Trump’s campaign posted that Trump was “calling for a total and complete shutdown of Muslims entering the United States until our country’s representatives can figure out what is going on.”

On March 10, 2016, Trump clearly stated his assumption that “Islam hates us.”

After courts blocked this Muslim ban, Trump tried again, and courts blocked his effort a second time. He’s now on his third version of the ban. This week, all eyes will be on the U.S. Supreme Court, which will be considering whether the ban can remain in force. So much hangs in the balance. 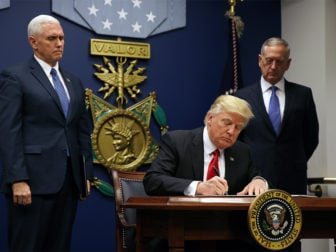 President Trump signs the original travel ban at the Pentagon in Washington on Jan. 27, 2017. Photo by Carlos Barria/Reuters

The Muslim ban is an affront to our very identity as a country. America protects religious freedom for all, not just for some.

As colonial-era Baptist minister John Leland, one of the foremost advocates for our First Amendment’s religious-freedom protections, wrote: “Government should protect every man in thinking and speaking freely, and see that one does not abuse another. … (A)ll should be equally free, Jews, Turks, Pagans and Christians.”

Our First Amendment promises that no one’s freedom of conscience takes precedence over anyone else’s. This protection differentiates us from many countries around the world. It was designed to shield us from the often-violent religious battles that others have endured. The Muslim ban is in direct violation of core American principles.

Behind every principle there are real people and institutions whom those principles are meant to protect. In our legal challenge to the Muslim ban, Americans United showed that among the people directly harmed by it are an elderly couple in poor health who live in Maryland. They desperately want their son in Iran to be able to care for them, but he’s blocked from coming to see them. This makes no sense.

We also represent a husband and wife who work in service of the federal government itself. This Maryland couple is devastated not to be able to receive a visit from the wife’s mother in Iran.

The harm also extends to our religious institutions. At the American Academy of Religion, our scholars are affected directly by the travel ban. Some have been invited to speak but are not granted access to our country. Others are members who have been blocked while traveling or are afraid of the ban and are therefore not coming to meetings here. Aside from those most directly harmed by the ban, countless other Americans are endangered because of the anti-Muslim sentiment that the ban has emboldened. Hate crimes and acts of intimidation against Muslims reached a modern high last year, easily surpassing the previous record year following 9/11.

Both American Muslims and those perceived to be Muslim have spoken up about the fear the ban has engendered. An Afghan-American described her family’s feelings: “My family and I have never felt more unsafe.” An American Hindu explained, “I’ve noticed heightened hostility towards my community.” An Iraqi-American Catholic said, “I feel like I did not belong here, that this is not a place for me anymore.” The ban has made many Americans question not only their place in this country, but their very security.

Trump has steadfastly refused to produce evidence to support his assertion in the courts, much less in the court of public opinion.

Do not be fooled. The Muslim ban’s true intent is to narrow the space for religious diversity in our country and please those who seek to re-establish Christian hegemony in American religious life.

The Muslim ban is emblematic of the struggle over the direction of our country. We choose the path that affirms the human dignity of every person, embraces diversity, welcomes the stranger and reflects American constitutional values. We sincerely hope the Supreme Court will be on the right side of history and uphold the Constitution’s promise of religious freedom for all.

(Rachel K. Laser is executive director of Americans United for Separation of Church and State. David P. Gushee is Distinguished University Professor of Christian Ethics at Mercer University and president of the American Academy of Religion. Americans United, along with Muslim Advocates and the law firm Covington & Burling LLP, represents the plaintiffs in Iranian Alliances Across Borders v. Trump — one of the cases challenging the Muslim ban. The views expressed in this commentary do not necessarily reflect those of Religion News Service.)

News
Archbishop of the military defends those who refuse vaccines
Follow us on Facebook!
Submit your photos to RNS