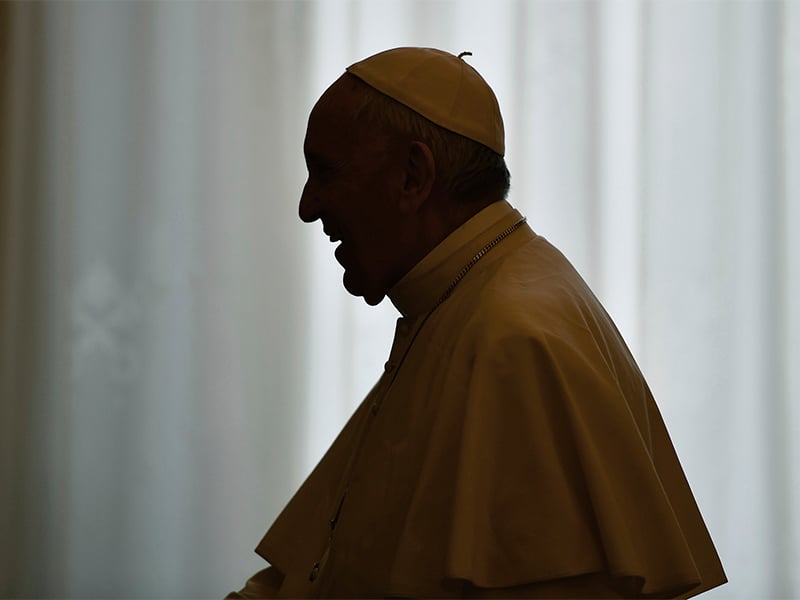 Pope Francis is silhouetted at the end of a private audience with then-Armenian President Serzh Sargsyan at the Vatican on April 5, 2018. (Alberto Pizzoli/Pool Photo via AP)

(RNS) — Before he was pope, before he was archbishop of Buenos Aires, Francis spent much of his Jesuit life as a spiritual guide to young Jesuits. He was not a great theologian, although he was well read in theology. Nor was he the president of one of the order’s universities. Rather his job was to introduce young men to the Jesuits and help form them in their spiritual lives. He was the director of novices and rector of the community where young Jesuits studied philosophy and theology.

This background and experience helped make Francis the person he is today. It also explains why he naturally felt impelled to write “Gaudete et Exsultate,” his recently released apostolic exhortation on the call to holiness. For Francis, all Christians, not just religious and priests, are called to holiness. But as an experienced spiritual guide, he knows that most people are confused about what holiness really is and therefore can easily get lost on their spiritual quest.

Francis’ goal was not to write an abstract theological treatise on holiness but to present a practical way to holiness for our time. He does this with a simple style that is full of spiritual wisdom that can enrich any reader, whether a beginner or experienced practitioner of the spiritual life.

Francis begins by reminding us that “no one is saved alone, as an isolated individual. Rather, God draws us to himself, taking into account the complex fabric of interpersonal relationships present in a human community.” Rather than presenting the hermit as the ideal Christian, he invites us to look at the ordinary holiness of our next-door neighbors, especially in the patience and persistence of their lives.

Nor does he believe that everyone’s road to holiness is the same. People must discern their own paths to holiness rather than “hopelessly trying to imitate something not meant for them.”

“Are you married?” he asks. “Be holy by loving and caring for your husband or wife, as Christ does for the Church. Do you work for a living? Be holy by laboring with integrity and skill in the service of your brothers and sisters. Are you a parent or grandparent? Be holy by patiently teaching the little ones how to follow Jesus. Are you in a position of authority? Be holy by working for the common good and renouncing personal gain.”

In short, “We are all called to be holy by living our lives with love and by bearing witness in everything we do, wherever we find ourselves.” Holiness does not come from grandiose achievements but by “many small gestures.”

Quoting Pope Emeritus Benedict XVI, he explains that “holiness is nothing other than charity lived to the full.” Put another way, it entails “reproducing in our own lives various aspects of Jesus’ earthly life: his hidden life, his life in community, his closeness to the outcast, his poverty and other ways in which he showed his self-sacrificing love.”

While recognizing the need for moments of quiet and solitude before God, Francis argues that “It is not healthy to love silence while fleeing interaction with others, to want peace and quiet while avoiding activity, to seek prayer while disdaining service.”

Rather, “Your identification with Christ and his will involves a commitment to build with him that kingdom of love, justice and universal peace.”

“Everything can be accepted and integrated into our life in this world, and become a part of our path to holiness,” he writes. He calls this “contemplation in action,” a term well known in Jesuit spirituality.

But this action is not frantic. “How can we fail to realize the need to stop this rat race and to recover the personal space needed to carry on a heartfelt dialogue with God?” he writes. “Sooner or later, we have to face our true selves and let the Lord enter.”

Quoting the Jesuit cardinal and writer Carlo Martini, he notes “This may not happen unless ‘we see ourselves staring into the abyss of a frightful temptation, or have the dizzying sensation of standing on the precipice of utter despair, or find ourselves completely alone and abandoned.’”

All of this and more Pope Francis relates in just the first chapter of “Gaudete et Exsultate,” or “Rejoice and be Glad” (Matthew 5:12). It is a rich and powerful message easily accessible to the people of our time from the world’s preeminent spiritual guide.