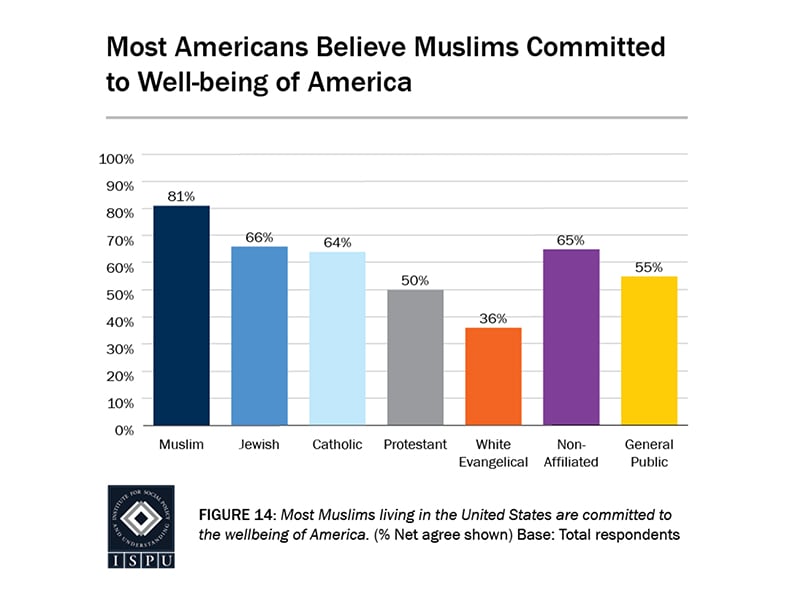 (RNS) — With incidents of anti-Muslim bias on the rise last year in the United States, Muslims are growing less and less satisfied with the direction of the country under President Trump, according to a new poll.

But despite experiencing more discrimination than other religious groups, American Muslims take pride in their U.S. identity as well as their faith, the survey found. And they are, for the most part, gaining acceptance among other religious traditions.

The third annual poll released Monday (April 30) by the Institute for Social Policy and Understanding, a think tank based in Washington and Dearborn, Mich., found that only 27 percent of American Muslims approved of the country’s direction, down from 41 percent last year and 63 percent in 2016.

But despite a low view of the president, Muslims strongly identify with their American nationality as well as their religion.

The poll of 2,481 Americans of multiple faiths taken by phone and online, found that Muslims are becoming more politically engaged. About 75 percent of Muslims said they were registered to vote, an increase of 7 percentage points over last year’s tally.

And Muslims are more likely than the general public to reject violence against civilians by the military or individuals.

That finding comes despite an advocacy group’s finding that anti-Muslim sentiment has been on the rise. In April, the Council on American-Islamic Relations released a report showing a spike in anti-Muslim bias in in the U.S. in 2017. Of the 2,599 incidents of bias, 919 ― or about 35 percent —involved a government agency leading the civil rights group to claim an “unprecedented level of government hostility” toward Muslims.

That report suggested Trump’s travel ban, which barred the entry of individuals from several Muslim-majority countries into the U.S., accounted for 18 percent of the total number of anti-Muslim bias incidents documented in 2017.

“Trump’s behavior has provided an opaque veneer of legitimacy to bigotry, racism, and xenophobia in the public sphere,” the CAIR report said. 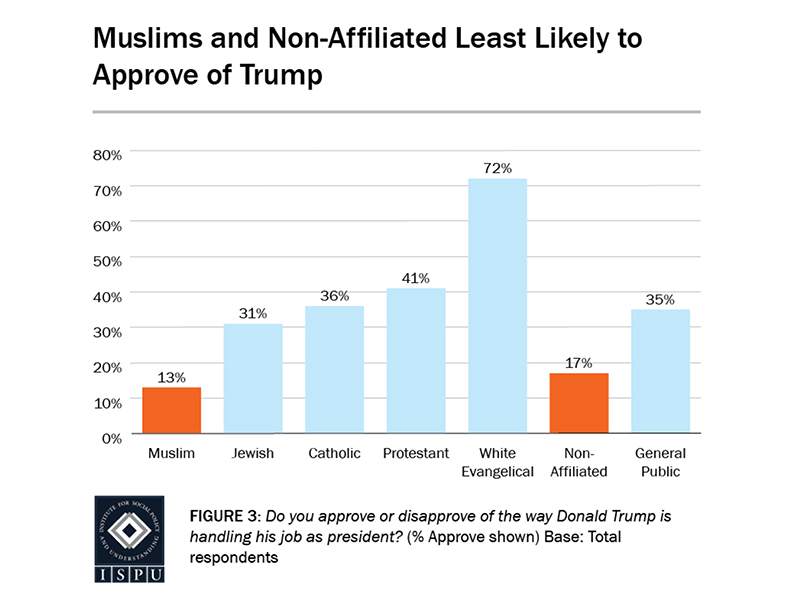 Trump’s travel ban isn’t the only source of hostility toward American Muslims. At the height of his 2016 campaign, he told CNN’s Anderson Cooper: “I think Islam hates us.” Two of his appointees — Steve Bannon, the former White House chief strategist, and Sebastian Gorka, the former deputy assistant to the president —  expressed doubts about peaceful coexistence with Muslims in the West.

Trump’s more recent appointees have long records of anti-Muslim remarks and ties to anti-Islam groups. Both John R. Bolton, the national security adviser, and Mike Pompeo, who was confirmed by the Senate last week as the new secretary of state, regard Islam as a hostile political ideology that is infiltrating the U.S.

“The poll identifies something we need to be concerned about, which is the administration and the impact of that administration has on our broader society,” said John Esposito, professor of religion and international affairs at Georgetown University and the director of the Bridge Initiative, a multi-year research project that partnered with the ISPU on the poll.

Yet despite truculent political forces in Washington, the ISPU poll shows that a majority of Americans generally are more accepting of Muslims:

Those views are shared by Jews, Catholics, mainline Protestants and unaffiliated Americans, the poll found.

The one group that appeared to resist Muslim integration was white evangelicals — the group most allied with Trump and his policies. Only 34 percent of white evangelicals opposed the travel ban; 36 percent believe Muslims are committed to America’s well-being. 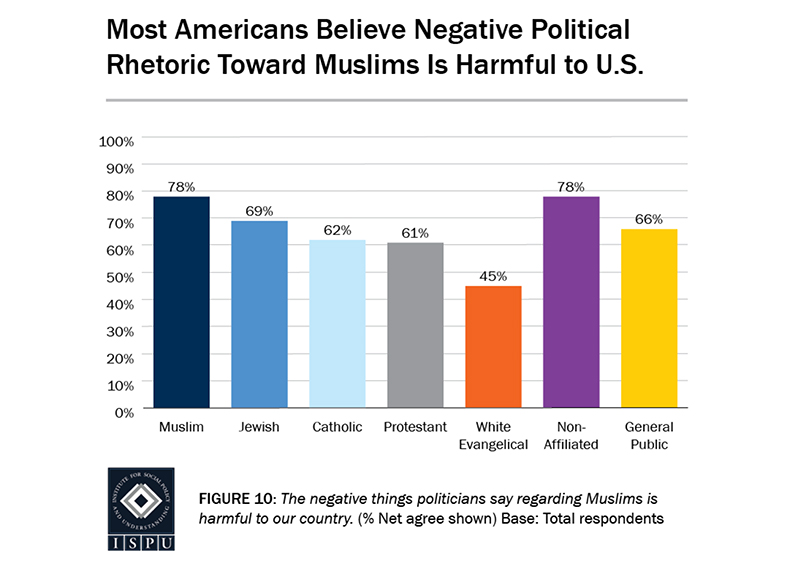 “Most Americans Believe Negative Political Rhetoric Toward Muslims Is Harmful to U.S.” Graphic courtesy of ISPU

Overall, Muslims do not appear to be responding by hiding or withdrawing from public life. On the contrary, Muslim identity is strong especially among younger people. Ninety-one percent of Muslims between the ages of 18 and 29 say their religion is important to the way they think of themselves. And younger Muslims show no signs of leaving the faith as their counterparts in other faiths do.

“What’s really clear from this report is that Muslims are very proud of being Muslim,” said Esposito. “That shows a real strong resiliency when you consider the kind of discrimination against women who wear the hijab or mosques being desecrated or destroyed. It shows a strong sense of American citizenship. This is where they want to be and this is where they feel they want to raise their kids.” 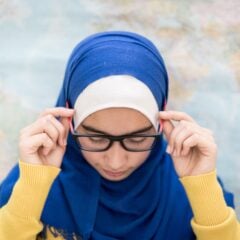