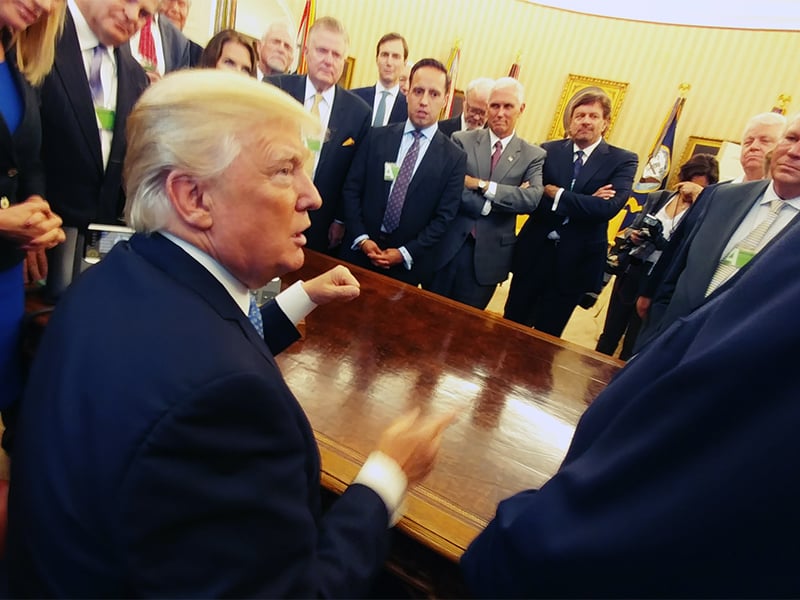 President Trump meets with faith leaders inside the Oval Office on May 3, 2017. Photo by Pastor Mark Burns
May 8, 2018
Mark Silk

One of President Trump's court evangelicals dropped by for a chat this afternoon. What follows is an edited transcript of our discussion.

CE : You want to give me a hard time about my support for the President, right?

CE: I don’t have a lot of time, so give it your best shot.

MS: How about we start with Franklin Graham. In 1998, he wrote about President Clinton, "If he will lie to or mislead his wife and daughter, those with whom he is most intimate, what will prevent him from doing the same to the American public?" Now he says that President Trump's sex life is "nobody's business." Quite the double standard, don't you think?

MS: So Donald Trump the human being doesn't bother you?

CE: You mean, Donald Trump the liar, the cheat, the bully, the thoroughly despicable human being who doesn't have a spiritual bone in his body? Of course he bothers me. I wouldn't let my 16-old-daughter anywhere near the Oval Office. Every time I leave it I feel like taking a shower.

MS: And yet you never miss an opportunity to kiss his, well, ring?

CE: Works like charm, prof. Did you read what Mike Hayden, the former CIA chief, said in the New York Times Magazine on Sunday? And I quote: "the most benign explanation as to why Trump seems to not criticize Putin is a phrase from the Soviet period: polezni durak, the useful idiot, the sort of person the Kremlin secretly held in contempt but went all out to exploit."

MS: So you're saying Trump is your useful idiot?

CE: Exactly. He's like King Ahasuerus. Esther comes in, gives him what he wants, and poof, the enemies of the Jews are dead. Frankly, Trump's done a whole lot more for us than he's done for Putin. Supreme Court Justice, the Jerusalem embassy, religious liberty, the Johnson Amendment.

MS: Actually, he didn't destroy the the Johnson Amendment like he promised.

CE: Actually, I could care less about the Johnson Amendment. My people will vote Republican whether I do any electioneering from the pulpit or not.

MS: Well, how much do you care about the other issues?

CE: Not all that much, if you want to know the truth. Well, I guess I care about abortion. The thing is, I've got a business to run, and nothing puts the fannies in the seats more than having your pastor go to the White House all the time. They just eat it up when I tell them what I told the president and what he said to me.

MS: Has it ever occurred to you that Trump is the Antichrist?

CE: Not just to me. It's all over the Internet.

MS: So what do you think Jesus will think of your support for Trump over the past two years?

CE: Oh, I don't think He's going to be too bothered by it. The End Times are coming and pretty soon too, I'd say, now that Trump's gotten us out of that Iran deal. Before you know it, the centrifuges are going to be spinning away again in the Islamic Republic. Come the Rapture, I'm outta here. Can you say the same for yourself?

MS: I'm afraid not, Rev. Thanks for making time in your busy schedule. Have a nice day.