(RNS) — United Methodist Church activists who sharply disagree about whether to ordain LGBT clergy or officiate same-sex marriages do agree on one point: A plan recommended by the Council of Bishops isn’t satisfying to either side.

Socially conservative evangelicals say the plan, which aims to avert schism in the 12 million-member denomination, goes too far by permitting individual pastors and regional bodies to make their own decisions on whether to perform same-sex weddings and ordain LGBT people as clergy.

“The reaction from the evangelical side of the church in the U.S. was, I think it’s safe to say, entirely negative,” said Mark Tooley, president of the Institute for Religion and Democracy, a conservative advocacy group.

Meanwhile progressives aren’t happy either. Reconciling Ministries Network and the United Methodist Queer Clergy Caucus, two groups committed to the full inclusion of LGBT people in the United Methodist Church, also expressed concerns that none of the three plans included in the bishops’ report would affirm ordination and marriage for all the denominations’ LGBT members.

“We took a step back and said there is an option that’s missing in all of this discussion, and that option is legislative language written into the Book of Discipline that would welcome and celebrate the lives of LGBTQ members of the United Methodist Church,” said RMN Executive Director Jan Lawrence.

United Methodist bishops endorsed the so-called One Church Plan earlier this month. It acted on recommendations from a 32-member Commission on a Way Forward, which began its final meeting to wrap up its work on Monday (May 14) in Nashville, Tenn.

The One Church Plan is one of three plans suggested by the Commission on a Way Forward. That commission was created after the General Conference, the United Methodist Church’s governing body, came to an impasse on legislation regarding human sexuality at its quadrennial meeting in 2016 in Portland, Ore. 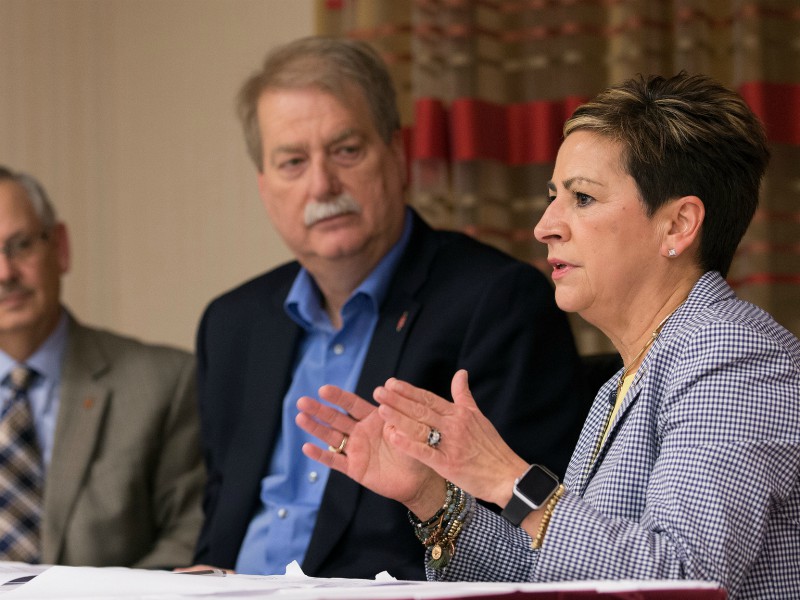 Bishop Cynthia F. Harvey, right, answers questions during a press conference about the United Methodist Church’s Way Forward plan to address how the denomination ministers with LGBTQ individuals at the conclusion of the church’s Council of Bishops meeting in Chicago. She is flanked by Bishops Bruce R. Ough, left and Kenneth H. Carter. Photo by Mike DuBose/UMNS

That plan would remove the controversial language about human sexuality from the Book of Discipline, according to the council. The denomination’s rulebook, the Book of Discipline, states that “the practice of homosexuality is incompatible with Christian teaching” and “self-avowed practicing homosexuals” cannot be ordained as ministers, appointed to serve or married in the church.

It also would safeguard pastors and conferences unwilling to perform same-sex weddings or ordain LGBT people because of their theological convictions. The plan marks an attempt to plot a path that can hold together a diverse international denomination that includes more than 5 million abroad, where sexuality norms can diverge sharply from those in the United States.

RELATED: African Methodists worry about the church that brought them Christianity

It was “the wisest choice they could make,” according to a Facebook post by the Rev. Adam Hamilton, senior pastor of one of the country’s largest United Methodist congregations.

It’s also “frustrating” and it “potentially increases harm,” depending who you ask.

The One Church Plan “helps us to maximize our mission in as many places in the world as possible, it offers a model for contextualization in dramatically different settings for ministry (we are on four continents, and are not a national church), and it achieves as much unity as possible,” Bishop Ken Carter, president of the Council of Bishops, told Religion News Service last week in an email.

But few more details about the plan are available — and they won’t be until proposed legislation can be translated into the four official languages of the General Conference: English, French, Portuguese and Swahili. That’s expected by July 8, the deadline for petitions to be considered at the special session.

And that’s a concern for many United Methodists of all minds on questions of human sexuality.

Carter says that concern is “often grounded in a U.S.-centric mindset.” Waiting to translate and release the report simultaneously across the globe is “more just and fair,” he said. Plus, United Methodists will have 230 days to reflect on the report before the special session begins in St. Louis. 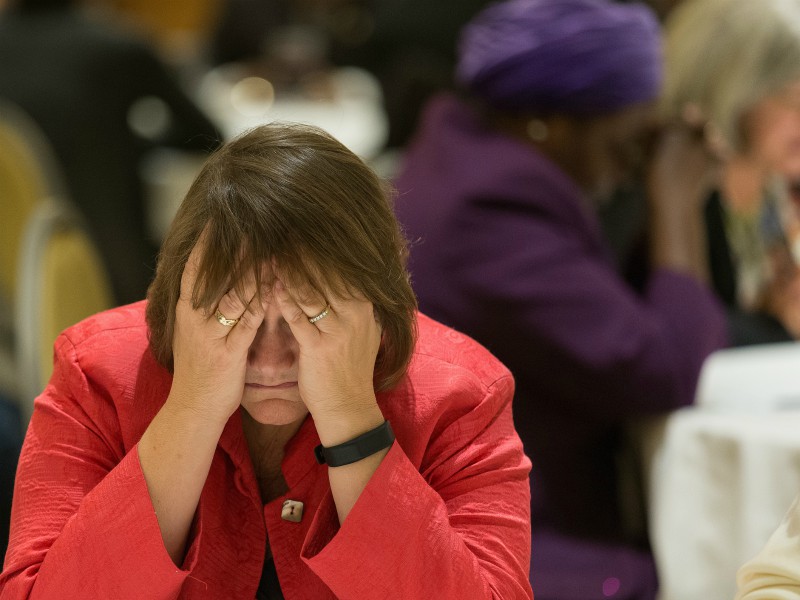 United Methodist Bishop Karen Oliveto joins in prayer during the closing worship service at the denomination’s Council of Bishops meeting in Chicago. Photo by Mike DuBose/UMNS

But the lack of details has created confusion and uncertainty, according to Lawrence of RMN. And it makes it difficult for anyone to submit a petition in response for the special session of the General Conference to consider, according to Tooley of the IRD.

There are different parts of the plan different groups are happy to see: Both Lawrence and the UM Queer Clergy Caucus celebrated the removal of the controversial language on human sexuality from the Book of Discipline.

Evangelical groups like Good News and the IRD released statements applauding the bishops’ inclusion of a Traditionalist Plan as one of the three in their report, even though it didn’t win the bishops’ recommendation. The IRD believes the Traditionalist Plan would maintain a conservative view of sexuality that excludes ordaining LGBT clergy and performing same-sex marriages, according to its website.

United Methodists have seen similar proposals from bishops and special commissions over the years, and the General Conference doesn’t necessarily follow the lead of the Council of Bishops, Tooley pointed out.

Still, in Tooley’s view, if the bishops’ recommendation is approved next year by delegates, that would fit the pattern that led to schisms in Episcopal, Lutheran and Presbyterian denominations.

Carter, the president of the Council of Bishops, said the bishops know other U.S. denominations have experienced division.

“Our complexity is that we are a global denomination, and in this sense our cultural and contextual realities present a greater challenge,” he said. “I will say we are seeking a way forward toward unity and greater inclusion.”