(RNS) — Paige Patterson, the embattled president of the Southern Baptist Convention’s largest seminary, was asked to step down after an outpouring of criticism for his comments on women, including advice he gave to a woman to stay with her abusive husband and new reports he asked another woman not to report a rape.

The departure represents the most dramatic example of the #MeToo movement pervading the top reaches of the Southern Baptist Convention.

The board of trustees of Southwestern Baptist Theological Seminary in Fort Worth, Texas, met for 13 hours Tuesday (May 22) before issuing a statement thanking Patterson for his contributions and service to the school, after voting to make him president emeritus with compensation.

Last month a tape from the year 2000 surfaced in which Patterson said he never counsels divorce for abused women and then recounted an incident in which he told an abused woman to pray beside her bed at night and be “submissive in every way that you can.”

A more recent sermon also came to light that included a comment about the body of a teenage girl, and another criticized female seminarians who don’t work hard enough to look good.

On Tuesday, The Washington Post reported that in 2003 Patterson told a woman who said she had been raped that she should not report her allegations to the police and encouraged her to forgive her alleged assailant.

The woman, a student at Southeastern Baptist Theological Seminary in Wake Forest, N.C., where Patterson was president at the time, was instead put on academic probation. 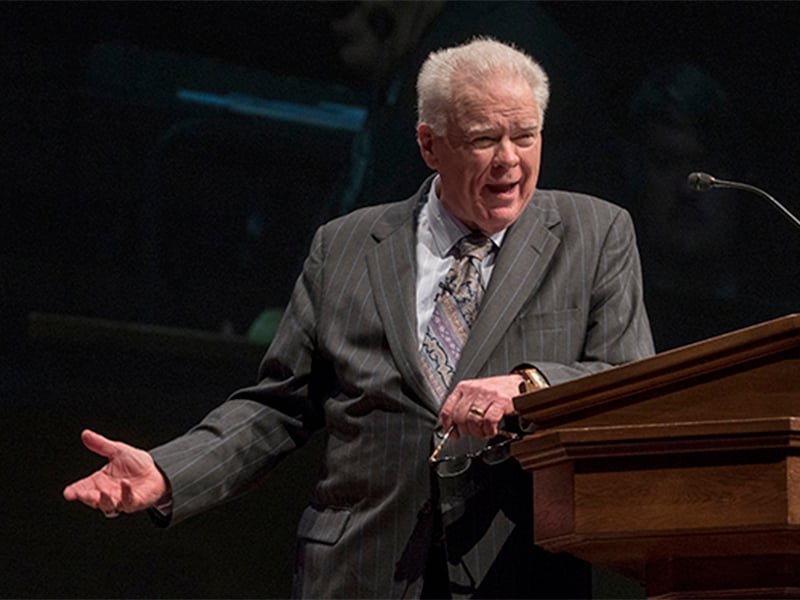 Paige Patterson speaks on Feb. 15, 2018, at the Southwestern Baptist Theological Seminary in Fort Worth, Texas. Photo by Sarah Chelf/SWBTS

Response to the initial comments about abused women was swift. More than 3,200 Southern Baptist women signed an online letter asking the trustees to take action against Patterson.

“The Southern Baptist Convention cannot allow the biblical view of leadership to be misused in such a way that a leader with an unbiblical view of authority, womanhood, and sexuality be allowed to continue in leadership,” the online letter dated May 6 said.

On Wednesday, one of the women who signed the petition said she felt relieved.

“If you had told me a month ago that Paige Patterson would be removed from his office, I would never have believed it,” said Karen Swallow Prior, a professor of English at Liberty University in Lynchburg, Va., and a Southern Baptist.

“While there isn’t a statement yet from the board or from Patterson repenting of the particular patterns of behavior that prompted our petition, I think this is a dramatic first step toward that kind of recognition and repentance,” she added.

The board, which did not address any of the offending comments or actions that led to Patterson’s removal, also appointed D. Jeffrey Bingham, dean of the School of Theology, to the position of interim president.

Patterson’s removal is in some ways a sign that he had “overstayed his welcome,” said Bill Leonard, a professor of church history at Wake Forest University’s Divinity School in Winston-Salem, N.C. The 75-year-old Patterson’s authoritarian style and methods were no longer tolerated, even within the conservative SBC.

“He’s placed an emphasis on women’s role in the church that is fast being questioned, even in the confines of the present-day convention, as that letter signed by women asking for something to be done attests,” Leonard said. “These were not moderate, liberal women. These were women who came of age in the SBC and who challenged his particular theology of marriage and spouse abuse.”

Along with Judge Paul Pressler, a layman, and popular pastor Adrian Rogers, Patterson helped engineer the conservative takeover of the Southern Baptist Convention in the early 1980s.

For many years afterward, he was an undisputed gatekeeper who helped oust hundreds of moderates and liberals from their posts as administrators, department heads and professors.

But it was in his insistence on pushing back against feminism and the women’s movement and reinstating a biblical literalism when it comes to marriage, family, sex and the role of women that he made his mark.

Shortly after wresting control of the denomination, he helped push for a resolution opposing the ordination of women. In 1998, the year Patterson was elected president of the denomination, the convention amended its statement of faith to say “a wife is to submit herself graciously to the servant leadership of her husband.”

That male-headship approach is reflected in Southwestern’s website, where a subsection about “mission, vision and values” titled “Man’s Need for Salvation” makes no mention of women.

Women do make an appearance on the website in the alumni section. A description of Southwestern “women’s auxiliary” begins with a quote from Titus 2:3-5: “Older women are … to teach what is good, so that they may encourage the young women to love their husbands and children, to be sensible, pure, good homemakers, and submissive to their husbands, so that God’s message will not be slandered.”

But social and cultural changes, which once allowed pastors to advise women to stay in abusive marriages because their husbands could be converted to faith by their wives’ steadfast witness, finally caught up with him.

The #MeToo movement against sexual harassment and assault, as well as women’s growing demands for equality in pay and in the corridors of power, has swayed legions of Southern Baptist women and led to the #ChurchToo hashtag.

Even men joined in. In an article in Christianity Today, three Southern Baptist ministers, including J.D. Greear, a candidate for the presidency of the SBC, which meets next month in Dallas, wrote that church leaders are not undermining the institution of marriage by counseling abused women to separate from their husbands.

“There are certain situations of which physical abuse would be one, that done under the right counsel, we would say is a biblically permissible divorce,” said Greear, pastor of The Summit Church in Durham, N.C.

Greear was a student of Patterson’s at Southeastern, where he received a Master of Divinity and a Ph.D. in theological studies.

But on Wednesday, the pastor of The Summit, the region’s largest Baptist church, was unequivocal.

“There can be no ambiguity about the church’s responsibility to protect the abused and to be a safe place for the vulnerable,” Greear wrote in an email. “Abuse can never be tolerated, minimized, hidden, or ‘handled internally.’ Those in leadership who turn a blind eye toward abuse are complicit with it and must be held accountable. I hope that in the days to come, Southern Baptists will make that clear and act accordingly.”