Massachusetts Sen. Elizabeth Warren and New Jersey Sen. Cory Booker spoke Tuesday (May 22) at the Festival of Homiletics, a conference, founded in 1992, that gathers clergy from primarily white, mainline Protestant traditions to discuss and engage in the art of preaching, also called homiletics.

It was the first time that two politicians of Warren’s and Booker’s stature had appeared at the event. Celebrity speakers at the festival normally come in the form of popular ministers, such as the Rev. Rob Lee, a North Carolina pastor and descendant of Confederate Civil War Gen. Robert E. Lee whose denunciation of racist violence made a splash at last year’s MTV Video Music Awards.

But the theme of this year’s festival is “Preaching and Politics,” and those who assembled at Washington’s Metropolitan African Methodist Episcopal Church were treated to a rare hybrid of a campaign rally and a preaching competition.

The packed pews suggested mainline preachers are in search of pointers for how to tackle political morality and justice in the Trump era from the pulpit.

“Oftentimes we’re told in many of our denominations, ‘Don’t touch politics in your pulpit,'” said the Rev. Valerie Steele, of Highland Park United Methodist Church in Stillwater, Okla. “But I think we’re called to help people connect the head and the heart.” 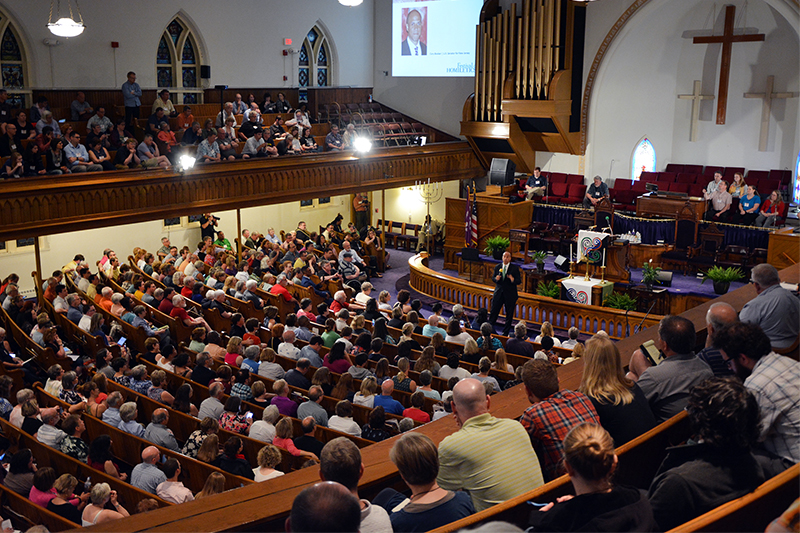 For Warren and Booker, conscious that their politics often overlap with a strain of social-justice preaching popular in mainline Protestantism, the conference offered an opportunity to connect liberal faith with potential votes.

Booker in particular has been no stranger to faith gatherings of late. He was the keynote speaker at the National Baptist Conference USA meeting in January and demonstrated last year with the Rev. William Barber II and others on the religious left against GOP efforts to repeal the Affordable Care Act.

Booker’s comfort with God talk was evident at Metropolitan AME as he paced back and forth in front of the crowd for roughly 45 minutes, speaking without notes.

“I have a saying: Before you tell me about your religion, first show it to me in how you treat other people around you,” he said. “I think faith demands a humility, not just before God, but really before others.”

Booker then pivoted to a discussion of various policy issues such as mass incarceration, poverty, paid family leave and environmental degradation.

“These are not political issues. These are moral issues,” he said, over shouts of “amen.” He later added: “This is a moral moment in America, where self-inflicted wounds are costing us not just humanity. … They’re costing us resources. And a lot of it stems from how we look at each other.” Sen. Cory Booker (D-N.J.) speaks to the Festival of Homiletics on May 22, 2018, at Metropolitan AME Church in Washington. RNS photo by Jack Jenkins

Booker bemoaned the political divisions in the country, recounting criticism he received from fellow Democrats when he publicly hugged fellow Sen. John McCain, R-Ariz., after learning of McCain’s cancer diagnosis.

“Have we got to the point where we’re demonizing God’s creation?” he said, his voice rising.

After championing respect for all faiths earlier in his speech, Booker, who attends a Baptist church, made clear he is a Christian. Even if members of Congress have come to see their political adversaries as enemies, he asked, “Are we making the sin (of) violating the dictates of our faith to ‘love thine enemy’?”

As he closed, Booker called those in attendance to action, saying, “Stay faithful, because we have come this far by faith.”

Warren’s address was half as long as Booker’s, but no less religious in tone — an unexpected turn for the Massachusetts senator, who has been less vocal than Booker about her faith. When she pulled out a King James Bible to read from Matthew 25, good-natured groans went up from an audience that typically uses Bible translations that are approximately 300 years more recent.

Standing in the pulpit and sometimes waving her Bible as she spoke, the former Harvard Law School professor began by recalling how she had once been cajoled into teaching a fifth-grade Sunday school class. She was floored by a child named Jesse who answered a question about what people owe to each other by saying, “Everybody gets a turn.”

This concept is echoed in her politics, she said. “I fight to uplift and protect the divine in every single person.” 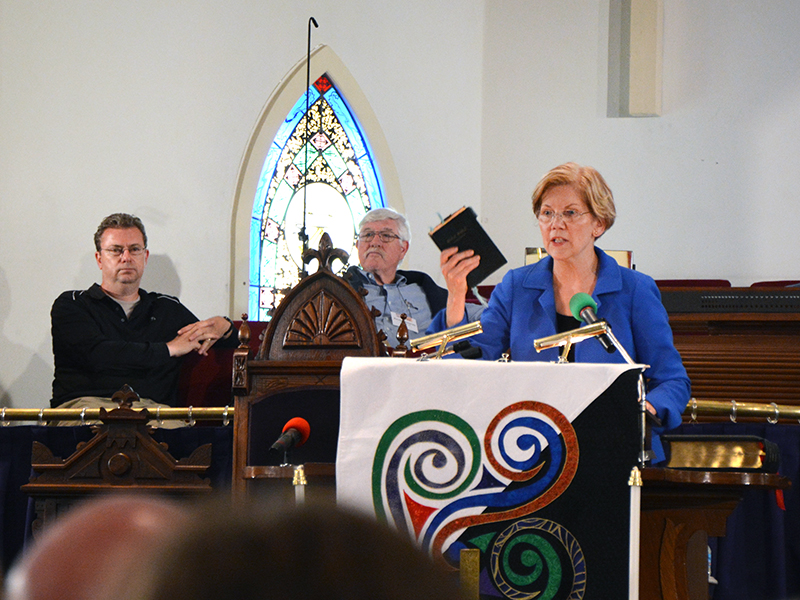 Sen. Elizabeth Warren (D-Mass.) speaks during the Festival of Homiletics on May 22, 2018, at Metropolitan AME Church in Washington. RNS photo by Jack Jenkins

Warren called the surge of activism after President Trump’s election — citing the Women’s March, protests against the travel ban on primarily Muslim countries and the championing of undocumented immigrants and gun control — “righteous fights.”

That led to a fiery chant, joined by the enthusiastic crowd: “Our fight is a righteous fight!”

The audience’s response to both speeches was overwhelmingly positive. “(Both) were a challenge to us pastors,” said Steele. “I’m not just called to preach social justice — I’m called to act.”

The assembled preachers seemed to welcome the notion that their conference had been turned into something akin to a hustings for a day. Introducing Booker, the Rev. David Howell, the Presbyterian minister who founded the conference, said, “I don’t hope to move to New Jersey, but I do hope to vote for you someday, if you catch my drift.”

Certainly, there was no shortage of liberal-leaning voices among the lineup of homilists scheduled to speak. Otis Moss III, pastor of Trinity United Church of Christ in Chicago, defended President Obama’s support for same-sex marriage in 2012; Diana Butler Bass, an author and theologian, has been a vocal critic of Trump; the Rt. Rev. Mariann Edgar Budde, the Episcopal bishop of Washington, has been an outspoken supporter of gun control legislation.

But even if nobody was converted by the senators’ speeches, attendees said there was still a lot to learn from the encounter. And looking ahead at 2020, Booker may have gleaned something from Warren’s performance: His potential opponent, a force in a debate, can preach, too.

Opinion
How Congress can bring good news to the poor this Advent
Follow us on Facebook!
Submit your photos to RNS