(RNS) — My first experience of an iftar, the meal that breaks the fast each evening during the Muslim holy month of Ramadan, was in Cairo more than a decade ago. I was studying abroad there and my new friend Nesma invited me to join her family in their apartment to break the fast.

I showed up a bit before sundown, watched a little TV with them, and then we drank milk and ate dates to break the fast. Over dinner, I learned more about what this holy month means to this Muslim family and to others observing Ramadan this year through mid-June.

That’s why I’m helping organize a campaign called United States of Love Over Hate: A Ramadan Supper Series. Thousands of Americans have signed up to share iftar with Muslims at more than 115 sites in 33 states. Participation is up significantly from last year when we had half as many states involved.

Taking part in iftar dinner is now easy, even for those who have no Muslim friends or acquaintances. Our campaign has compiled a nationwide listing of iftars that are open to Americans of all religious backgrounds. Anyone may request a seat at the table. If there’s not one near you, contact a local mosque to ask if you might attend one evening before Ramadan ends.

From my Cairo iftar experience in 2005, I learned Ramadan is a time for both deep personal reflection and grounding, for re-centering oneself on God. Nesma shared with me some of the spiritual poetry she’d written during her increased time in prayer that month. This practice of re-centering resonated with me as a Christian. I too try to set apart time in our fast-paced world to remember who I am and why I am here. I learned that Ramadan is a unifying thread for a diverse faith community as Muslims across the world share the common experience of fasting.

Since then, I’ve had a number of opportunities to share in fast-breaking meals with Muslims in the U.S. and abroad. They’ve occurred in homes, restaurants, mosques — even in churches and synagogues. 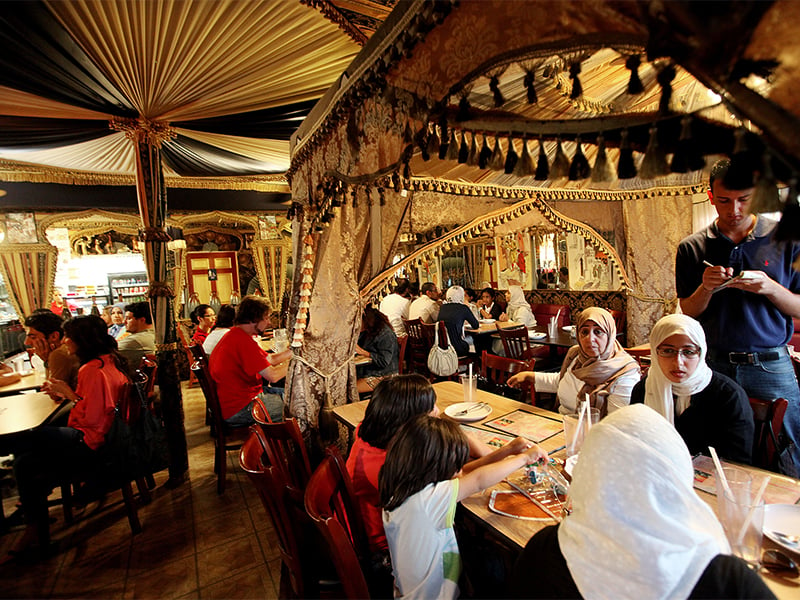 These meals are usually quite ordinary. Many Muslims in the U.S. and around the world break the fast with family or friends in simple settings. I’ve been grateful to be invited into these moments, both ordinary and extraordinary. I’ve developed some of my most meaningful relationships over meals.

As I know from these friends, this is not an easy time to be a Muslim in the United States. American Muslims are experiencing increased hate crimes and bullying. Politicians in 49 states have been documented using anti-Muslim rhetoric to score cheap political points. Some of my friends say they have been afraid to wear hijab in public, have struggled to explain anti-Muslim remarks to their children and have wondered if the United States will ever fully accept them.

Growing up as an evangelical Christian, I also understand why it’s difficult for people who don’t know any Muslims to learn about a group of Americans who pray and worship God in ways different from their own. I invited some of my evangelical friends to an iftar a couple of years ago. They had never been to one and had no Muslim relationships. They were unsure of what to wear, how to act, or even how to define “iftar.” But they showed up.

By doing so, my evangelical friends engaged in conversation with a random selection of people seated at their table. They left saying how eye-opening the experience had been.

Before sharing iftar, they thought of Muslims as “foreign” to the United States. The dinner let them experience the diversity of the Muslim-American community. They met new immigrants along with those whose families had lived in this country for years, including some whose ancestors were forcibly brought here as slaves. They said they gained new appreciation for the many voices and perspectives within the Muslim community. Since then, some have even hosted Muslims at their churches for more interfaith conversations.

I’m under no illusion that getting non-Muslims to share meals with Muslims during Ramadan is going to solve our anti-Muslim bigotry problem in America. But relationships are valuable in and of themselves. We have seen that Muslims and non-Muslims working together at local levels can influence society and on politics. A dinner is a starting point for letting your own preconceptions be challenged and getting to know people from different backgrounds in your community. It’s up to each of us to build from there.

United States of Love over Hate is one way to cultivate relationships that can be both personally and politically powerful. When people gather for dinner in hundreds of homes, mosques, churches, synagogues and community centers across the country, it shows another way for our country. It shows a way in which people are valued and opinions come from real encounters rather than hearsay. Will you join me for dinner?

(Catherine Orsborn is director of the Shoulder to Shoulder Campaign, a coalition of 55 religious denominations and faith-based organizations that works against religious bigotry and discrimination.) Religion Hub
Why most Muslims – but far from all – celebrate Mawlid, the Prophet Muhammad’s birthday
Follow us on Facebook!
Submit your photos to RNS