(RNS) — Omid Safi’s latest project was a labor of love, in the most literal sense.

Safi lives in North Carolina, where he leads the Islamic Studies Center at Duke University. His fiancée is based in Switzerland. “We had a long-distance romance, a kind of old-fashioned courtship with us exchanging letters every few days,” he said. So he began translating his favorite poetry from Islam’s mystical Sufi tradition to send to her.

“You know, you should publish this,” she told him after a few years. “It touches my heart, and I bet it would touch other people’s hearts as well.”

With her encouragement, he compiled all the verses he’d translated into a book, “Radical Love,” published in May. It contains more than 200 poems translated from their original Arabic, Turkish, Urdu and Persian, including those by the 13th-century Sufi master Rumi.

The collection situates Safi’s translations of love-drunk Sufi poetry alongside selections from the Holy Quran and sayings of the Prophet Muhammad, showing the deep Islamic roots of the writings of Sufi mystics like Rumi and Hafez.

In a time when most headlines about Muslims revolve around violent extremism, Safi says one of his aims is to show non-Muslim readers that they can’t divorce Rumi’s popular poetry from Islamic scripture and tradition. But, perhaps more important, he also wants to re-educate Muslims to show them the forgotten Islamic roots of these mystical works.

Safi, who edited the 2003 volume “Progressive Muslims” and authored a biography about the Prophet Muhammad, spoke to Religion News Service about his switch from academic writing to translation, what the popular memory of Rumi misses, and Martin Luther King Jr.’s legacy of radical love. This interview has been edited for length and clarity.

The poetry of Rumi and Hafez, among other mystics, has been translated countless times. Was there something you saw in those translations that you sought to correct? 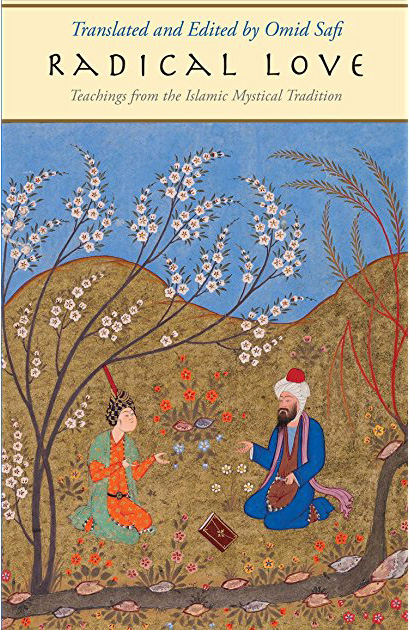 There are two main sets of translations of Sufi poetry. One has been done primarily by British scholars, plus some Americans, that tried to offer the most literal translation possible. It could never be accused of being poetic. They said themselves that they made no concession to readability. But they did this as a study guide for people who were trying to learn Persian and Arabic.

Then, particularly in the last 20 or 30 years or so, you have more people offering what technically should be called versions, not translations. They’re working purely from those early, literal Victorian translations and casting them in American free verse. In the process, they completely minimize the deep and profound Islamic context of this Sufi material.

Rumi’s poetry is among the most Quranic of Islamic literatures. He called his poetry the unveiler of the Quran, and his love poetry was considered a Quran commentary. He had thousands of references to the Quran and sayings of the Prophet. And they just eliminated most of them. So when he would speak about his love for God and the Prophet, these translations rendered it as “beloved” with a lowercase “b.” Reading it, you’d think he’s describing his earthly beloved, which is lovely but misses the sensual and spiritual context of relating to God.

I try to figure out which poems, or even which lines of which poem, work in English. The aim is something that is fresh and poetic but also accurate.

Most of your published work before this has been more academic. Why did you make this pivot?

I’ve reached a lovely place in terms of my own career, alhumdulillah (“all praise belongs to God”). I don’t really want to spend the rest of my days writing books for a narrow field of specialists. When I look around my home, it’s filled with books about the richness of the Islamic tradition in various languages. I was blessed to be born into a family where that richness is appreciated. There’s a sense of responsibility in terms of how I will convey that to the next generation.

You frame the book by setting poems, some of which have made their way into American bookshelves, alongside selections from the Quran and sayings of the Prophet. Why use that structure?

I do it because that’s how, for the last thousand years, we have presented our tradition. There’s a spiritual-but-not-religious audience out there that’s reading Rumi and perhaps casting him in a somewhat New Age context. We have to somehow have them rediscover the original Islamic context of Rumi’s poetry.

For a Muslim audience, there is this extraordinary, rich, mystical, spiritual and poetic voice that has historically been the dominant Muslim worldview. In the last 1,400 years of Islamic thought, one would be extremely hard-pressed to think of a Muslim whose teachings and writings have been more influential on more Muslims in more countries in more time periods than Rumi. From India to Bosnia, Rumi was a dominant voice in all these places.

“If you’re spending all of your time talking about why Islam is not about extremism…then you don’t have a whole lot of space left to talk about love and poetry and union with God.”

That voice is much more marginalized today than in the past among Muslims. If you’re spending all of your time talking about why Islam is not about extremism and not about violence and not about oppression of women, then you don’t have a whole lot of space left to talk about love and poetry and union with God.

It’s important for us as Muslims to carve out space — which is not a new space, it’s a space we’ve always had as part of our tradition — for the spiritual, the mystical, even the sensual, alongside the more commonly heard legal and theological voices.

The concept of a “radical” or “transformative” love has recently emerged from a number of faith traditions to reach a public platform. There’s Sikh civil rights activist Valarie Kaur’s Revolutionary Love Project and Episcopal Bishop Michael Curry’s now-iconic sermon at the Royal Wedding. What do these voices share with those of the Sufi mystics?

The similarities are absolutely profound. It’s the same tradition of radical love that you get from a Martin Luther King Jr., from a Bishop Curry or a Valarie Kaur or a Rev. William Barber or a Rabbi Abraham Joshua Heschel.

That’s not to say that these are all interchangeable. They all have their distinctiveness. MLK was a Christian lover. Rabbi Heschel was a thoroughly Jewish mystic. And I hope that the voice I’m bringing here is an unmistakably and distinctly Muslim voice.

That same tradition of sacred love compels you to rise up and act when you see injustice and suffering in the world. In that sense, it’s that same love tradition that, when it enters the public, we see and recognize as justice — and when it moves inwardly, we recognize as tenderness. We can be extraordinarily tender in dealing with people in our lives, but extraordinarily fierce in denouncing injustice in public.

These days we see a tendency to give a pass to those who are fighting for really progressive politics in terms of how they treat the people around them. But this tradition says differently, that if you want to be a radical love warrior for dignity and integrity, the measure of that is the tenderness you bring to humanity.

News
What four strangers of different faiths learned while living together during a pandemic
Election
As ‘Jericho Marchers’ descend on Washington, local faith leaders brace for attacks
News
117th Congress, like the old, is overwhelmingly Christian, heavily Protestant
News
Each year 1,000 Pakistani girls forcibly converted to Islam
Islam Beyond Phobia
What Jesus means to me as a Muslim