Attorney General Jeff Sessions visits San Diego and addresses the media during a news conference at Friendship Park just south of Imperial Beach on the border between the United States and Mexico. Photo by Mani Albrecht/U.S. Customs and Border Protection

(RNS) — In the middle of the storm of outrage at the Trump administration’s “zero tolerance” policy, by which parents accused of crossing the U.S.-Mexico border illegally were being separated from their children, a group of United Methodist clergy and laypeople took a step last week that other outraged Americans of faith (and no faith at all) could only dream of: They asked the denomination to spiritually sanction one of its members, Attorney General Jeff Sessions.

This is stunning on two fronts. Obviously, it captures the magnitude of liberals’ disgust at the Trump administration policies, particularly their ire at seeing Sessions cite the Bible to defend the policy. Secondly, it invokes a curious and potentially unwise invocation of church discipline.

Sessions has faced a crescendo of criticism since last week, when he read from the New Testament’s Letter to the Romans, in which the Apostle Paul charged, “Let everyone be subject to the governing authorities.”

Faith groups led the condemnation roughly in proportion to their relative alignment with or opposition to the president.

With few exceptions, white evangelicals lamented the policy of separating children from their parents but generally did not direct their criticisms at the administration. The Catholic bishops deplored this policy and another one that forbids rape victims from seeking asylum, adding to their long string of sharp rebukes of the Trump administration.

Liberal Protestants, both black and majority-white, have spoken most strongly. President Trump won the votes of white mainline Protestants by 11 points in 2016, but by and large Methodists, Lutherans, Presbyterians and Episcopalians support progressive policies, and at the level of their denominational elites are very liberal.

Last Friday (June 15), the Rev. Susan Henry-Crowe, general secretary of the UMC’s General Board of Church & Society, issued a statement calling Sessions’ defense of the policies and, in particular, his invocation of Romans 13 in its defense, “a shocking violation of the spirit of the gospel.”

This was a strong official condemnation, one that falls within Henry-Crowe’s purview while not speaking for the church agency she leads — let alone the entire denomination.

The letter of complaint against Sessions, signed by some 600 of his fellow Methodists and sent in accordance with the denomination’s Book of Discipline, on the other hand, is unprecedented. Church polity experts cited in news reports could recall no parallel in 50 years of United Methodist history.

It far exceeds a 2003 effort in which more than 100 United Methodists signed an ad in Christian Century magazine calling on President George W. Bush, also a United Methodist, to repent of his foreign and domestic policies.

That action, which included seven bishops, was widely panned because it overrepresented theological liberals in the denomination, including some who denied the historicity of the Resurrection and even the divinity of Christ. 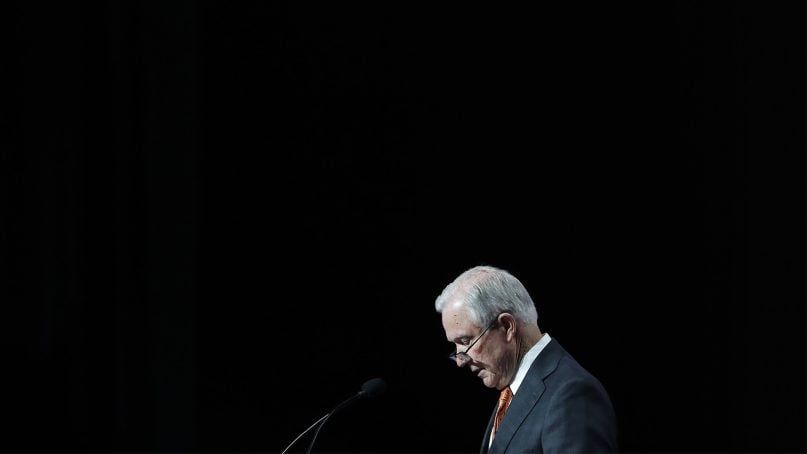 This week’s ecclesial charges against Sessions go even further, officially asking for an intervention and possible censure of a longtime United Methodist layman.

But, as with the anti-Bush ad 15 years ago, the church complaint against Sessions reveals more about the signatories than about him.

It’s worth noting that, while many UMC bishops have spoken out in other ways, none signed the complaint. Among the 600 who signed the letter, a disproportionate number are from the denomination’s Western Jurisdiction, an area that is geographically vast, numerically small and overwhelmingly liberal.

The sudden passion for church discipline among political liberals is a surprise, especially as progressive United Methodists have railed against the use of letters of complaint against clergy who have solemnized same-sex marriages in violation of church law.

The complaint is indicative of United Methodists’ anger and frustration that, writ large, has the denomination hurtling toward schism.

They have seen their church’s laws used before reconciliation had been fully tried. Now, these same liberals, unwillingly schooled at fighting over marriage and sexuality, risk weaponizing church discipline for all manner of political fights. In this polarized era, it risks dividing the denomination even more.

I suppose I should say that it is invigorating to see a renewed concern about sin on the religious left. While all Christians affirm sin as a category, conservatives and liberals disagree about the meaning and manifestations of sin. Liberals see social and collective sin in systemic injustices to a degree that conservatives often do not. Conservatives have an easier time declaring that biblically or ecclesiastically forbidden expressions of sexuality are, in fact, sins.

But this attempt to rein in Sessions is not really about sin in either sense. It’s a sign that the church and the nation are exhausted by the immigration debate and perhaps more by a party system that is unwilling to address our incoherent and sometimes cruel policies.

As such, the liberals’ new-fashioned commitment to church discipline is shortsighted and likely to backfire. The hammer you rediscover as powerful today could be in someone else’s hands tomorrow.

Sessions must face on his own the question of why has he prostrated himself before Trump in ways that jeopardize his commitments to Christian teaching and human decency. I doubt that the introspection Sessions needs will come from liberals or any religious denomination.

Acquiescence to Trumpism is not yet a heresy in American Christianity. If it were, the churches would be even emptier than they already are.