Anthony Kennedy was far from the best writer on the Supreme Court and far from the best legal mind. He rarely turned a memorable phrase and the legal standards he articulated were little more than a guide for how he himself would rule on the next relevant case.

But he brought a sense of decency and respect to the Court’s decision-making that will be sorely missed. In a judiciary nearly as polarized as the country itself, he was given to acknowledging that there could be justice on both sides of a contentious issue. At a time when left and right want total victory based on simple rules, his approach was to try to find common ground—particularly when it came to cases involving religion.

Take Hobby Lobby, the 2014 case that recognized that closely held for-profit companies enjoy a right of religious free-exercise—in this case to refuse to provide certain contraceptive coverage to female employees under the Affordable Care Act. Kennedy signed on with the majority, but wrote a separate concurrence in which he asserted the state’s right to insure that contraceptive services be available.

“There are many medical conditions for which pregnancy is contraindicated,” he wrote. “It is important to confirm that a premise of the Court’s opinion is its assumption that the HHS regulation here at issue furthers a legitimate and compelling interest in the health of female employees.”

He went on to declare his support for the Obama Administration’s disputed approach to allowing an exemption for religious non-profits while guaranteeing the coverage: “In these cases the means to reconcile those two priorities are at hand in the existing accommodation the Government has designed, identified, and used for circumstances closely parallel to those presented here.”

This term’s Masterpiece Cakeshop decision sums up Kennedy’s “both-and” approach. Jack Phillips, the owner of the bakeshop, prevailed not because his religious right to withhold services trumped Colorado’s anti-discrimination law, but because the Colorado civil rights commission had failed to respect that right.

Yes, wrote Kennedy in his final opinion for the Court, “the religious and philosophical objections to gay marriage are protected views and in some instances protected forms of expression.” But, he continued, “it is a general rule that such objections do not allow business owners and other actors in the economy and in society to deny protected persons equal access to goods and services under a neutral and generally applicable public accommodations law.”

It is telling that, in the immediate aftermath of the decision, the Arizona Court of Appeals used it to uphold the constitutionality of civil rights measures that protect LGBTQ Americans.

Masterpiece Cakeshop notwithstanding, Kennedy had a tendency to defer overmuch to government authority, as manifested in his readiness to permit a wide range of religious establishments, from public school vouchers to Ten Commandments displays to legislative chaplains’ prayers. In Trump v. Hawaii, he joined the majority in allowing President Trump’s travel ban despite abundant evidence that it was directed against Muslims and thus violated the Establishment Clause.

Unsurprisingly, he added a brief concurrence that sought common ground, sounding a warning to the country’s Chief Executive even in granting him free rein.

Indeed, the very fact that an official may have broad discretion, discretion free from judicial scrutiny, makes it all the more imperative for him or her to adhere to the Constitution and to its meaning and its promise.

The First Amendment prohibits the establishment of religion and promises the free exercise of religion. From these safeguards, and from the guarantee of freedom of speech, it follows there is freedom of belief and expression. It is an urgent necessity that officials adhere to these constitutional guarantees and mandates in all their actions, even in the sphere of foreign affairs. An anxious world must know that our Government remains committed always to the liberties the Constitution seeks to preserve and protect, so that freedom extends outward, and lasts.

These, Kennedy’s final words as a Supreme Court justice, are certain to fall on deaf presidential ears. His last will and testament to the American people, they seem woefully inadequate to the present moment.
Share
Tweet
Share
Reddit
Flip
Email
Posted in
Columns General story Law & Court Opinion Spiritual Politics 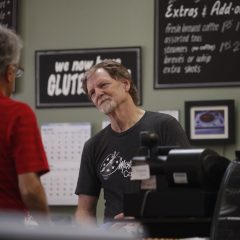 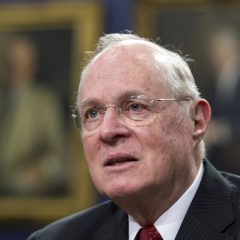 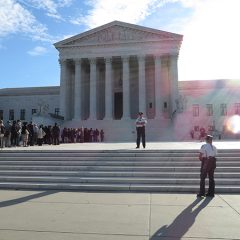 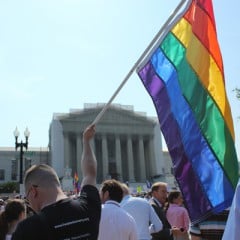