(RNS) — As the Episcopal Church begins its 79th General Convention on Thursday (July 5), it’s a good time to take note of the state of the erstwhile official faith of the American Colonies that became a stalwart of mainline Protestantism.

News stories from the convention will likely focus on the denomination’s slow decline, as well as debates over same-sex marriage and the treatment of women, revising the Book of Common Prayer and whether to use masculine pronouns for God. But over these discussions looms a greater confrontation, one that will touch the lives of millions of Christians in dozens of countries.

In July 2020, the archbishop of Canterbury will convene the Lambeth Conference, a decennial meeting of the bishops who are spiritual leaders to the world’s 80 million Anglicans. Between this week’s General Convention and then, the debate about who can rightly claim to be the legitimate expression of Anglicanism will reach a fever pitch.

The controversy got a preview last month as nearly 2,000 conservative Anglicans gathered in Jerusalem for the third Global Anglican Future Conference, or GAFCON, representing 50 countries and including 1,000 bishops and other clergy. Depending on whom you ask, GAFCON is either a conservative renewal movement within the worldwide Anglican Communion or a quasi-schismatic organization designed to undermine official church structures. 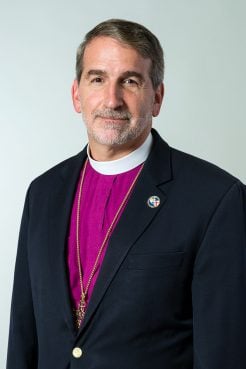 The Most Rev. Foley Beach, archbishop of the Anglican Church in North America. Photo courtesy of ACNA

You might fall into the latter category if you’ve never heard of Archbishop Foley Beach, primate of the Anglican Church in North America. Still small compared with the Episcopal Church, with about 1,000 congregations from Canada to Mexico, ACNA comprises mostly churches or dioceses that split from the Episcopal Church over disagreements about homosexuality, the role of women in the church and other doctrinal matters.

But millions of Anglicans, especially in the Southern Hemisphere of the globe where all Christian denominations tend to be more conservative, regard ACNA as the true faith and Beach as the American Anglican primate. At GAFCON’s Jerusalem meeting, he was elected chairman of its primates’ conference.

The mainstream media, including most reporters and commentators who specialize in covering religion, took little notice of the Jerusalem conference, which was actively discussed only by a handful of small Christian news sites and blogs. This is, in part, because Justin Welby, the archbishop of Canterbury, is not likely to tell the historic American church that it is out of communion with the rest of the world’s Anglicans, at Lambeth 2020 or anytime soon.

It is also because American reporters exhibit a parochial indifference to ecumenical Christian matters — they barely took note, for instance, of Pope Francis’ visit to the World Council of Churches in Geneva last month.

Their blindness extends to the rising power of the conservative tide in the Global South. In May, as Episcopal Presiding Bishop Michael Curry delivered a rousing homily at the wedding of Prince Harry and Meghan Markle, news outlets celebrated his church’s connections to Anglicanism’s rich traditions and history without remarking on the fight brewing over that same tradition. The image of Curry chatting with Welby during the endless processional was cheering, but it painted an inaccurate picture of the state of pan-Anglican relations.

Anglicans’ approaching dilemma should be a cautionary tale for other theologically diverse and geographically disparate Christian traditions.

After years of papering over vast theological differences with appeals to unity, progressive United Methodists in the United States and their conservative counterparts in places like sub-Saharan Africa and the Philippines are finding they may not be able to coexist in the same denomination in any meaningful way. 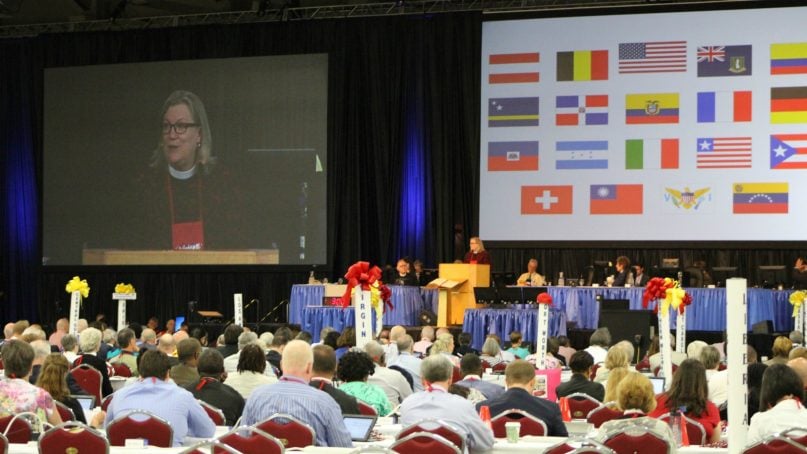 The Rev. Gay Clark Jennings, president of the House of Deputies, presides over that house at the 2015 General Convention of the Episcopal Church in Salt Lake City. Photo courtesy of the Rev. Brian Baker

Catholics have centuries more experience with maintaining universality while also tolerating local variation in matters of practice. But even as they tout the integrity of saying so unequivocally and without apology, the Vatican and its bishops have counted the costs in the numbers of Catholics (and ex-Catholics) who vigorously oppose church teaching on marriage and sexuality.

There is a limit, in other words, to how much difference ecclesial bodies can abide before their constituents cease to be in communion with one another, organizationally or spiritually.

The onus is on Christians seeking to revise matters of faith and order to persuade the reactionary forces that the tradition can accommodate the change. Some denominations, for instance, have incorporated the ordination of women clergy into their churches without schism. Such is the case with United Methodists, who began ordaining women in 1956.

(This includes the breakaway Anglicans of ACNA, whose bishops recently put out a statement agreeing to disagree about whether to tolerate women priests, reminding us that schism often only leads to more schism.)

It could be that Welby will buy time until a majority of Anglicanism’s provinces agree with the Episcopalians (if ever). For now, GAFCON’s posture is that it has the authority to sanction the Episcopal Church for its accommodation of LGBT members and the elevation of female bishops — or at least that it has the raw power to compel the archbishop of Canterbury to do so. And at Lambeth they won’t likely be content to “agree to disagree.”

How it will all play out, God only knows. Or maybe she doesn’t.

Correction: This article originally stated that ACNA is one of the provinces of the Anglican Communion. While the Archbishop of Canterbury has called ACNA “an ecumenical partner,” it is not in the Anglican communion. 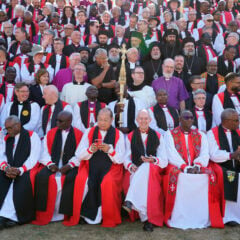 Religion Hub
Friction over LGBTQ issues worsens in global Anglican church
Follow us on Facebook!
Submit your photos to RNS