(RNS) — In a political era dominated by growing wealth inequality, resurgent white supremacy and the Party of Lincoln reduced to presidential Twitter farce, a reasonable person might ask: Where are the Democrats?

Sidelined in Congress and decimated in statehouses, today’s Democrats have lost the winning touch that gave us the New Deal, the Great Society and four decades of uninterrupted control of the House of Representatives. To get it back, they might do well to note what’s happening in Denver this weekend (July 20-22) as Democrats for Life of America convenes for what’s planned to be an annual conference.

It wouldn’t hurt Dems to make room for faith language once again. The party’s unlikely coalition of Southern Protestants, white “ethnic Catholics” and Jews has given way to a secular-led party that cannot speak the language of faith sincerely and is skeptical of religious beliefs, especially when held by white people.

And while there are many explanations for political behavior and party realignment, the parties’ elevation of abortion politics and ever more constrained and extreme views goes a long way toward understanding why the party of workers, civil rights and the common man struggles so mightily to win elections.

Democrats for Life of America has a simple message: “We want our party back.” A small but determined band of happy warriors, pro-life Democrats are some of the most interesting figures in American politics. Their continued existence in spite of marginalization by the party poses serious questions that the American political system cannot ignore.

Some of the organizers and speakers at the Democrats for Life event have, despite devoting significant portions of their careers to the party, received nothing but scorn from Democratic elites.

They advocate for what Roman Catholics and other religious people call a “consistent pro-life ethic,” emphasizing not only opposition to abortion but also support for social spending, family-friendly immigration policies and robust government guarantees of equity and access in health care and education.

In other words, the Republican Party would shun them even more.

Once tolerated, pro-life Democrats have been mostly ostracized by the Democratic Party for a generation now. What makes them interesting is that they are a massive group. The DFLA can credibly claim to speak for some 21 million people, a huge slice of the Democratic electorate. 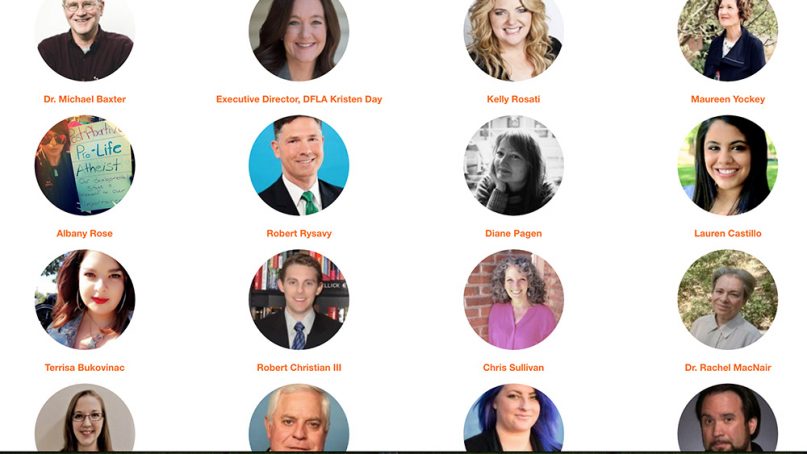 Some of the speakers for the Democrats for Life of America conference in Denver. Screenshot

In a 2014 report sorting Americans into various political typologies, the Pew Research Center noted the “Faith and Family Left”  — some 15 percent of the U.S. population who are likelier than the general public to say that religion is important to them and that the government should do more to help the needy. As Americans become more liberal on social issues, abortion remains the exception to that trend.

And while the abortion-rights debate, like most political matters, is fundamentally about questions of law and public opinion, abortion is considered by many (though not all) to be a uniquely religious issue, and one that moral perspectives heavily inform.

There is a subset of religious Americans whose faith affirms every plank of the Democratic Party platform, but this group is vanishingly small, as some of its progressive disciples opt out of religion altogether.

But most Americans who profess a faith find that their religious commitments cut across the two parties. Democrats of faith must contend with their party’s affirmation of the sexual revolution, while religious Republicans are badly out of sync with mainstream Christian ethics on, well, almost everything else from economics and social spending to immigration and the environment.

Anyone who proclaims a consistent life ethic by opposing war, capital punishment and abortion while affirming migration, health care and social spending is going to be politically homeless in America. Both parties actively undermine your values daily. And independent candidates, while helping break the two-party duopoly, seldom campaign on the “seamless garment of life.”

Democrats forget that Rep. Nancy Pelosi was propelled to the House speakership in 2007 by the votes of moderate Democrats without whom the party could never dominate national politics.

And the great irony is that abortion-rights supporters make the most progress when there are more Democrats in elected office, even if the margin is grown by adding pro-life Democrats.

But the Democrats have decided that they would rather be pure and right than win. That’s why the party has adopted ever more extreme abortion planks, moving from “Safe, legal and rare” to something more akin to “On demand, without apology and at public expense if needed.”

Of all the Pew types, the Faith and Family Left is one of the lowest-income and least-educated. It also has the highest share of African-Americans, Hispanics and foreign-born, according to Pew.

The Democratic Party can safely assume that most pro-life Democrats will never leave. On other issues, they are the ones who need the party the most. Thus they can be taken for granted as long as our two-party system holds onto its polarized grip on American hearts and politics.

But until better political options emerge through electoral reforms, new competition and structural changes, the Democrats for Life of America remains one of the most maligned yet potentially consequential groups on the political scene. Unlike tortured religious Republicans who know in their hearts that politics have warped their faith, pro-life Democrats stand tall with an enviable, almost infectious, integrity and hope.

National Democratic leaders will happily ignore their own basket-of-deplorables gathering in Denver this weekend. That’s a shame. But with enemies like these, who needs friends?