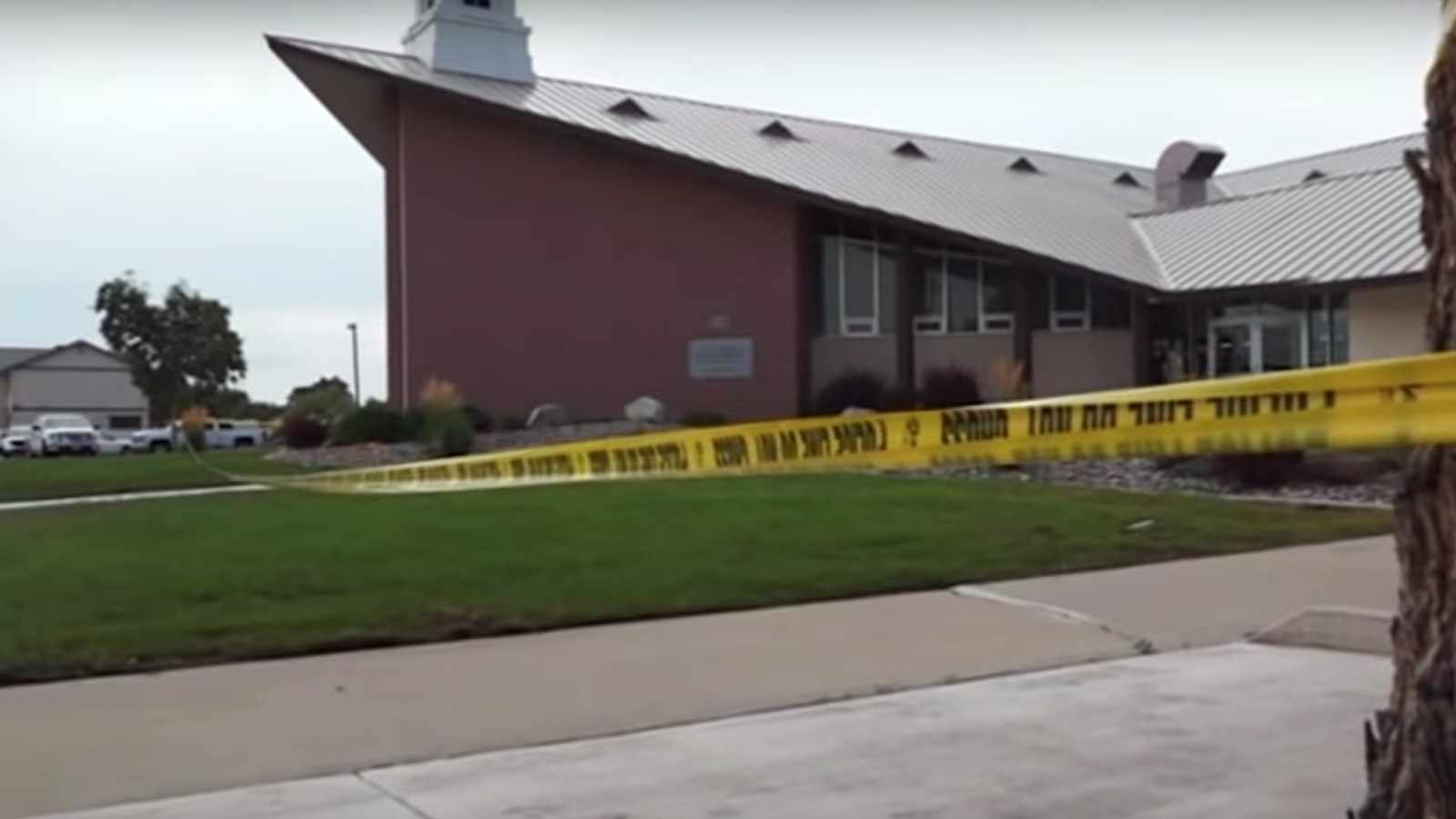 Crime scene tape surrounds a Mormon church in Fallon, Nev., after a fatal shooting on July 22, 2018. Screenshot via AP video

On Sunday, a middle-aged Mormon man went into the LDS chapel where his ward was having sacrament meeting, and sat quietly for part of the service. Then he opened fire, killing one ward member and wounding another.

I’ve spent the last couple of days trying to come to terms with this news. This is not a hate crime perpetrated by someone from outside my religious community; this was committed by one of our own.

According to the Salt Lake Tribune, police don’t yet know the gunman’s motive, but he may have been specifically targeting either the man who died or the man who was wounded but survived. Neighbors and fellow ward members seem shocked because the shooter had no known history of violence.

I am sure that many Mormons will dismiss this as an isolated incident that in no way reflects our community. I would very much like to believe that, but the truth is I’m not so sure. My ambivalence stems from Mormon Americans’ strange relationship with guns.

On the one hand, Mormon churches actually have a specific rule in the LDS handbook that forbids anyone except police officers from bringing lethal weapons into church buildings:

And earlier this year, LDS prophet Russell M. Nelson seemed to cast his weight behind efforts for stricter gun control laws after a mass shooting at a high school in Parkland, Florida, in February. He said:

“I know your hearts are heavy, as are Wendy’s and mine, as we contemplate those ruthless killings in Florida last week.

I think of Alaina Petty, a fourteen-year-old Latter-day Saint whose life was snuffed out by that sniper’s bullet. It’s natural for you and others to say: ‘How could God allow things like that to happen?’ Well, God allows us to have our agency, and men have passed laws that allow guns to go to people who shouldn’t have them.”

But there’s a pretty big “on the other hand.” Many Mormons are deeply and vocally supportive of the Second Amendment. The “LDS Liberty Products” website says this stance dates back to the Mormon pioneers, who relied on guns for hunting and protection.

I don’t agree with much on that website, but I concur that the legacy of “pioneer culture” runs deep among Mormons. In fact, today—July 24—is a state holiday in Utah for precisely that purpose: to celebrate the contributions, both real and heavily embellished, of these mostly white American Mormons.

But pioneer culture would have us imagining that Mormons use their guns only to achieve self-sufficiency and to prevent violence. Sunday’s shooting puts the lie to that, and it’s not my people's only violent incident. In 2014, 15-year-old Mormon Jared Padgett killed a fellow student at his Oregon high school, injured a teacher, and then took his own life.

He was a nice kid, by all accounts, before he became a murderer. He had been the president of his ward’s deacons’ quorum. He loved to play soccer. And he had an abiding fascination with guns and the military.

Some of Mormon America’s apparent love affair with guns is a regional dynamic: more Western states have liberal gun laws than Eastern states do. But even within those parameters, Mormon-majority Utah has been called the most lenient state in America on gun control.

In a 2013 JAMA study, researchers identified 28 separate possible gun control measures that various states had enacted, and categorized them according to five broad goals:

For each of the 28 possible measures, states could earn one point. Liberal-leaning Massachusetts received the highest score, with 24 out of 28 possible gun control measures enacted by the legislature.

Not much has changed in the intervening five years. Guns & Ammo ranked Utah sixth in its 2017 list of the best places in the U.S. to be a gun owner. “Utah gets full points nearly across the board due to its protections of the rights of gun owners,” the magazine enthused. “There are no permits to purchase or own any type of firearm and municipalities cannot regulate virtually any gun-related activity. The state has a strong use-of-force laws and all NFA items are legal for ownership.”

So why was Utah sixth and not first? The rankings were so close, the authors concluded, that it was really a “six-way tie” at the top. G&A seemed to be giving the edge to states that were passing new measures of leniency, praising their efforts to do away with all restrictions. Utah had already done all that, so there was nothing new to applaud.

There is a tiny possibility of change. In February of this year, in the wake of the Parkland shooting, Utah lawmakers were cautiously wondering aloud if maybe, just maybe, there might be something to the idea of sensible restrictions on firearms. Perhaps a background check? A greater commitment to school safety?

But the legislative session was about to end, so any discussion of gun control was postponed to 2019—after the 2018 elections, by a strange coincidence.

I don’t think Utah will pass sensible restrictions on guns (age limits, mental health background checks, bump-stock bans). We should not hold our breath that Utah will pass any restrictions whatsoever, because its legislators—nearly nine out of ten of whom are LDS—know their constituents and the premium those voters place on personal freedom, even at the expense of innocent lives.

I am reminded of some warning words that LDS president Spencer W. Kimball issued more than 40 years ago. After taking the Saints most vigorously to the proverbial woodshed and lambasting their materialism, sexual sins, lack of faith, laziness, and general idolatry, most of Kimball’s final words were about militarism and violence.

We are a warlike people, easily distracted from our assignment of preparing for the coming of the Lord. When enemies rise up, we commit vast resources to the fabrication of gods of stone and steel—ships, planes, missiles, fortifications—and depend on them for protection and deliverance. When threatened, we become antienemy instead of pro-kingdom of God; we train a man in the art of war and call him a patriot, thus, in the manner of Satan’s counterfeit of true patriotism, perverting the Savior’s teaching:

“Love your enemies, bless them that curse you, do good to them that hate you, and pray for them which despitefully use you, and persecute you;