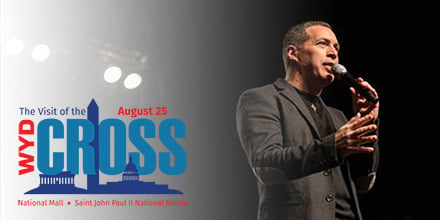 PORTLAND, Ore. - The official World Youth Day (WYD) Cross and Marian Icon, entrusted to the youth and young adults of the world by Pope Saint John Paul II in 1984, will make a multi-city tour of the United States later this month. This occasion marks only the third time the cross has made an official visit to the United States in 25 years - World Youth Day in Denver in 1993 and a two-day stop at New York City’s Ground Zero in 2002. The Cross came to New York City for a brief visit, to bring comfort to the nation's young people in the aftermath of the 9/11 terrorist attacks.

While in Washington, DC, the Saint John Paul II National Shrine will host the cross and icon as part of the international procession in advance of the World Youth Day event in Panama this coming January. Nationally acclaimed OCP recording artist Steve Angrisano will be featured and performing throughout the day. A veteran musician and composer, Steve has been featured at nine World Youth Days, the National Pastoral Musicians Conference (NPM), the Los Angeles Religious Education Congress, National Catholic Youth Conferences (NCYC), and many other national and international events.

The event includes a procession of the cross and icon to various landmarks throughout Washington, DC before it will be brought to the Shrine for veneration. The locations visited will consist of the Lincoln Memorial, the Martin Luther King, Jr. Memorial, and the National Mall in front of the Smithsonian Institution Building (The Castle), where Pope Saint John Paul II celebrated Mass on October 7, 1979 during his first pastoral visit to the United States.

About OCP
OCP, a not-for-profit publisher of liturgical music and worship resources based in Portland, Oregon, has been in operation for nearly 100 years. Worship programs produced by OCP are used in over two-thirds of Catholic churches in the United States and are distributed worldwide. Find OCP on Facebook at Facebook.com/OCPmusic.