(RNS) — Muslims around the world are greeting one another with the Arabic phrase “Eid Mubarak” to wish each other a blessed holiday.

Eid al-Adha, or the Festival of the Sacrifice, marks the end of the annual hajj to Saudi Arabia, considered obligatory for all able-bodied Muslims at least once in their lives. On Tuesday (Aug. 21), more than 2 million Muslims were to perform the final major ritual of the pilgrimage, the stoning of the devil, at the site where they believe Satan failed in his attempts to tempt the prophet Ibrahim to disobey God.

Muslims believe Ibrahim — Abraham in the Bible — had a vision calling him to sacrifice his son Ismail — Isaac in the famous biblical story —  which he interpreted to be a divine order.

“As he was about to slaughter his son, God revealed to him that he had fulfilled the purpose, and told him to slaughter a ram instead,” Imam Hammad Ahmad, who leads a mosque in Washington, D.C., told Religion News Service in 2016. “It’s symbolic of how we should kill our base desires — killing the animal within, to follow God’s will rather than our natural impulses.”

To commemorate the sacrifice and the unwavering faith of Ibrahim, his son and his wife, Muslims slaughter livestock and distribute the meat among their family, friends and those in need. In the West, many Muslims send money abroad or to local farms and butchers for the sacrifice.

On the morning of Eid, many Muslims dress up in their newest clothes, say their morning prayers and head to the mosque, then spend the day visiting family and friends. The celebrations typically involve food and gifts for the children, but sharing food and money with those in need is also critical to the four-day holiday.

Eid al-Adha begins the 10th day of Dhul Hijja, the last month of Islam’s lunar-based calendar, and is considered the greater Eid. The lesser one, Eid al-Fitr, falls at the end of the holy month of Ramadan. 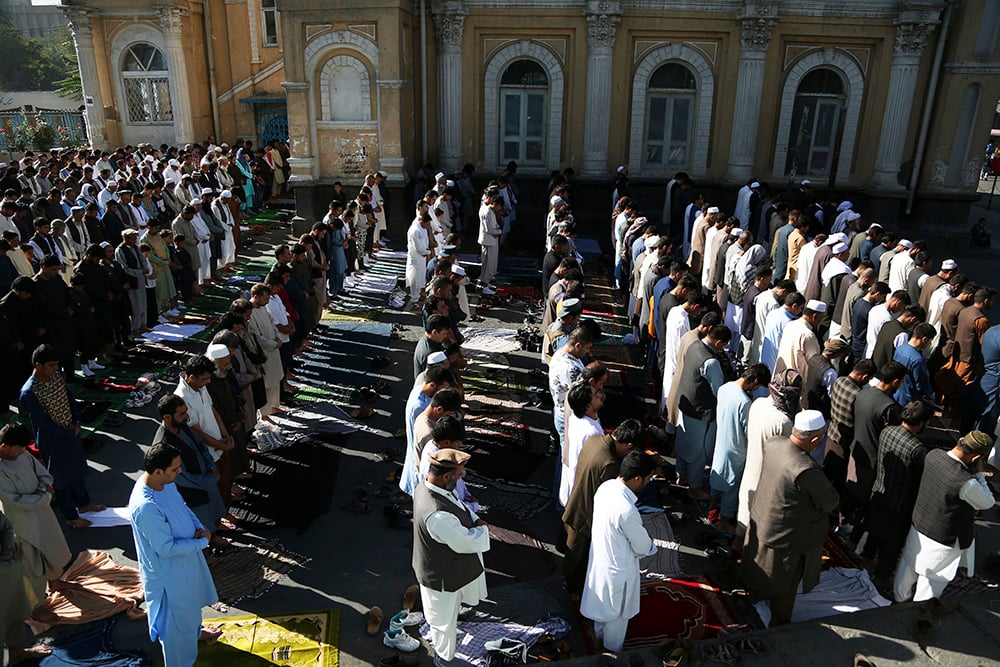 Afghan men attend Eid al-Adha prayers outside of Shah-e-Dushamshera mosque in Kabul, Afghanistan, on Aug. 21, 2018. During the Eid al-Adha, or Feast of Sacrifice, Muslims slaughter sheep or cattle and distribute portions of the meat to the poor. (AP Photo/Rahmat Gul) People gather at the bakery to bake Eid cookies in preparation for celebrations for the upcoming Muslim Eid al-Adha holiday in Baghdad, Iraq, on Aug. 20, 2018. Muslims around the world celebrate Eid al-Adha, or the Feast of the Sacrifice, by sacrificing animals to commemorate the prophet Ibrahim’s faith in being willing to sacrifice his son. (AP Photo/Karim Kadim) 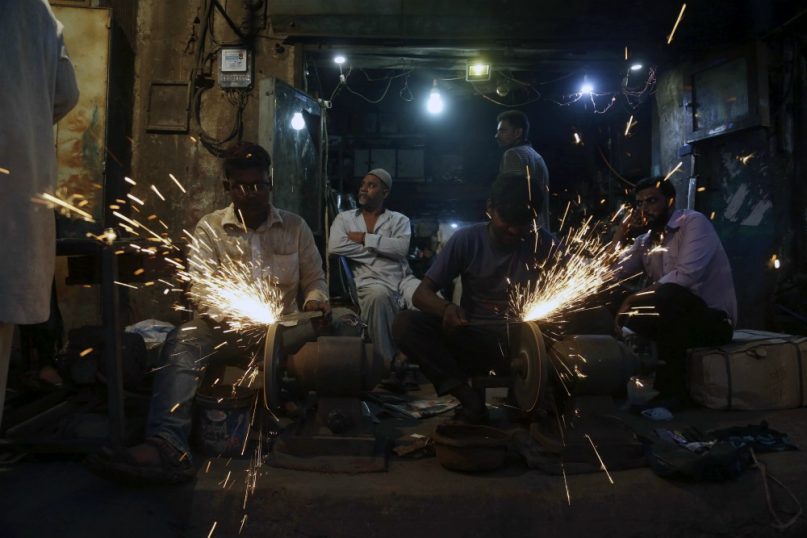 People sharpening knives ahead of Eid al-Adha in Karachi, Pakistan, on Aug. 20, 2018. The Feast of Sacrifice is an important Muslim holiday marking the willingness of the prophet Ibrahim (Abraham to Christians and Jews) to sacrifice his son. (AP Photo/Shakil Adil) 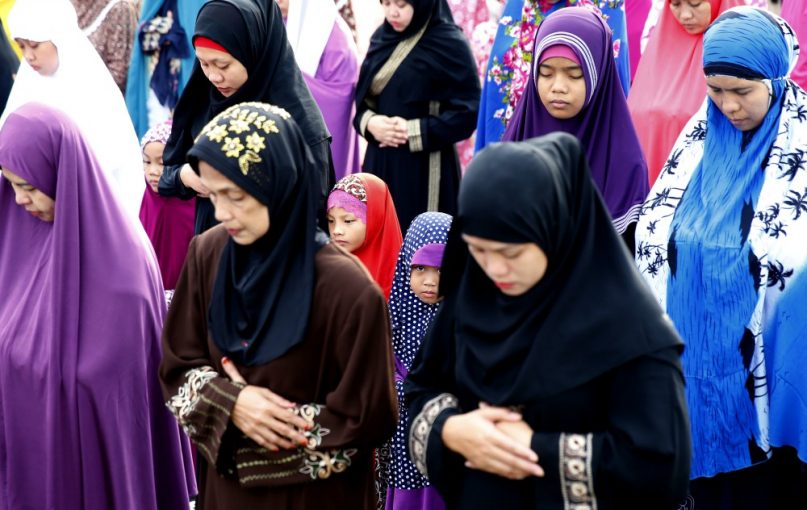 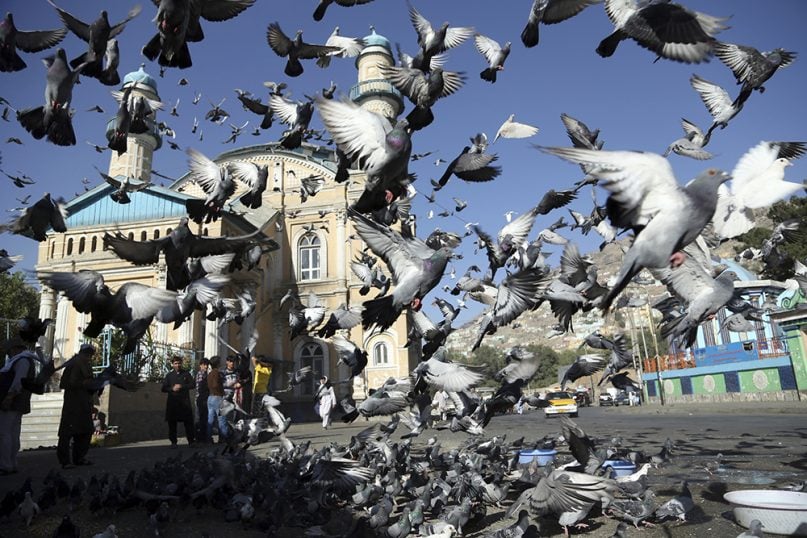 Pigeons fly as Afghans prepare to offer Eid al-Adha prayers outside of the Shah-e-Dushamshera mosque in Kabul, Afghanistan, on Aug. 21, 2018. (AP Photo/Rahmat Gul) 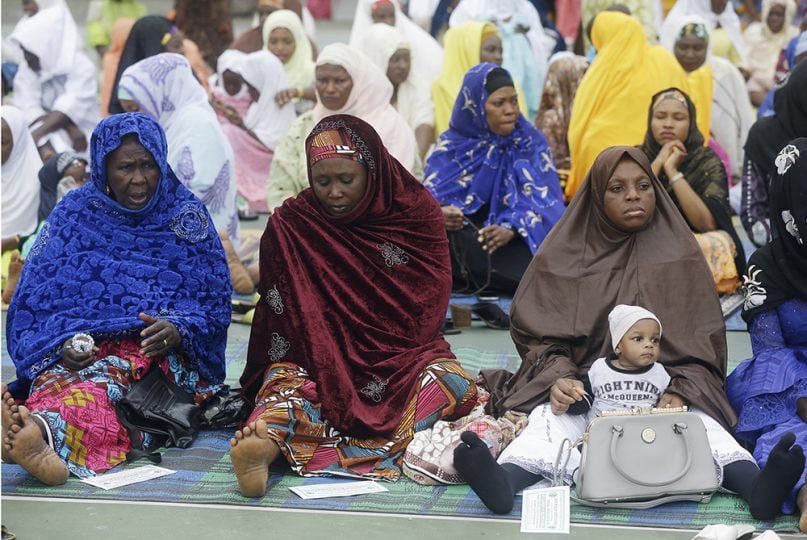 Muslims pray outside the Moscow Cathedral Mosque during celebrations of Eid al-Adha, which Muslims in Russia call Kurban-Bairam, on Aug. 21, 2018. (AP Photo/Alexander Zemlianichenko) 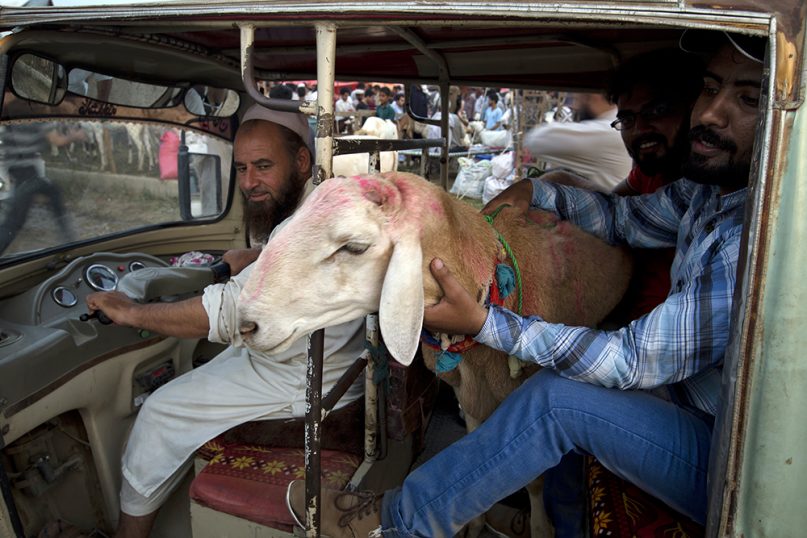 Pakistani customers carry a goat they bought for the upcoming Muslim festival Eid al-Adha in a rickshaw in Islamabad on Aug. 20, 2018. Eid al-Adha, or the Feast of Sacrifice, marks the willingness of Ibrahim (Abraham to Christians and Jews) to sacrifice his son. (AP Photo/B.K. Bangash) 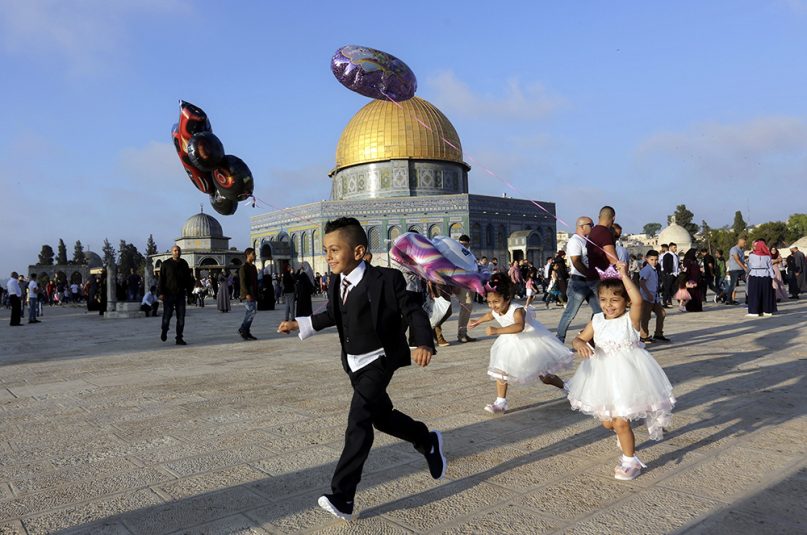 Palestinian children play with balloons on the first day of Eid al-Adha near the Al-Aqsa Mosque compound in Jerusalem’s Old City, on Aug. 21, 2018. (AP Photo/Mahmoud Illean) An enterprising Filipino Muslim brings out her sweets as she prepares to pray outside the Blue Mosque in observance of Eid al-Adha, on Aug. 21, 2018, in suburban Taguig city, east of Manila, Philippines. (AP Photo/Bullit Marquez) 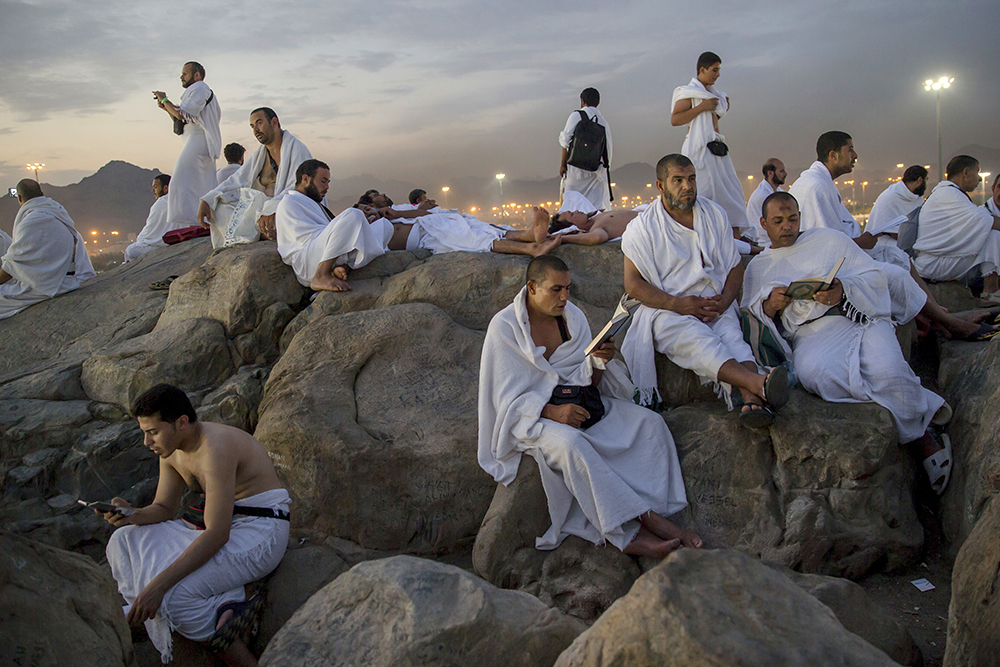 Muslim pilgrims pray on the Jabal Al Rahma holy mountain, or the mountain of forgiveness, at Arafat during the annual hajj pilgrimage outside the holy city of Mecca, Saudi Arabia, on Aug. 20, 2018, the night before the Eid al-Adha holiday begins. (AP Photo/Dar Yasin) 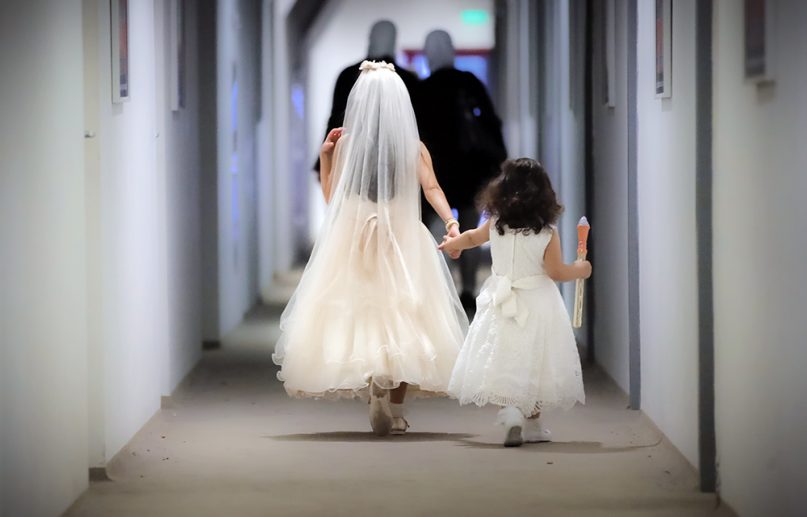 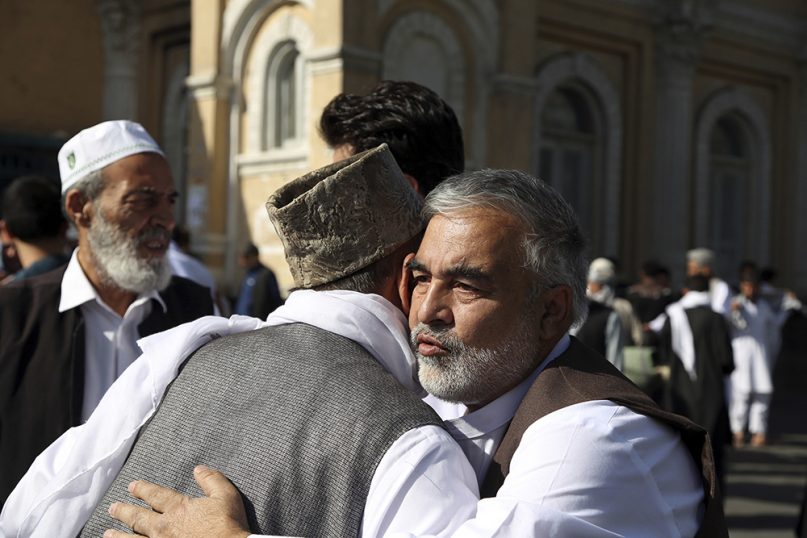 Men hug each other after offering Eid al-Adha prayers outside of Shah-e-Dushamshera mosque in Kabul, Afghanistan, on Aug. 21, 2018. (AP Photo/Rahmat Gul) 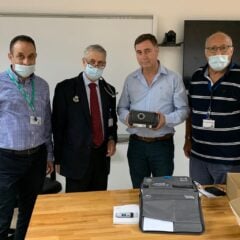 Opinion
Abraham would be proud 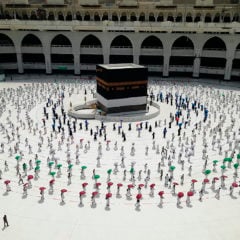 Opinion
As an isolated hajj begins, Abraham’s trust in God is ours 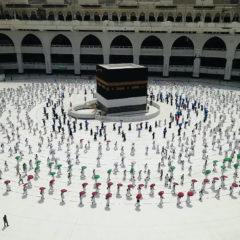