(RNS) — If the Senate confirms Brett Kavanaugh to replace Anthony Kennedy on the Supreme Court, there is every reason to think that the court will become more accommodating to conservative religious interests and concerns. But it won’t necessarily become as accommodating as those on the religious right would like.

Their bill of particulars against an institution they have long held in suspicion goes all the way back to the decisions that mark the origin of today’s culture war — the banning of teacher-led prayer and Bible reading in the public schools in 1962 and 1963. In 1968 the court prohibited state law forbidding the teaching of evolution. In 1973 it established women’s constitutional right to abortion — which has been the central focus of conservative religious politics for the past 40 years. And in 2015, it established a constitutional right to same-sex marriage.

Subsequently the court barred officially sponsored prayers at public school graduations and football games and placed limits on religious displays — crosses, creches and Ten Commandments plaques — in public spaces. Between 1986 and 2015, it went from upholding laws against sodomy to finding a constitutional right to same-sex marriage.

To be sure, the court has also promoted conservative religious interests. Over the past two decades it has recognized students’ rights to pray and operate religious clubs in public schools. It has helped religious schools gain access to public funds. And it has guaranteed the right of religious institutions to fire at will employees they consider ministers and recognized a right of religious free exercise for some for-profit corporations.

So how would a Judge Kavanaugh affect the Supreme Court’s approach to religion cases? Based on his record as a lower judge in the D.C. Circuit Court of Appeals, where he has sat since 2006, Kavanaugh appears to be a relatively nuanced interpreter of the law.

There’s no pro-life zealotry in the brief concurrence he wrote in the 2011 case of a man who claimed the right under the First Amendment and the Religious Freedom Restoration Act to chalk the sidewalk in front of the White House to protest President Obama’s position on abortion. Concurring with his colleagues in upholding a District of Columbia ordinance against defacing government property, Kavanaugh wrote: “I add these few words simply because I do not want the fog of First Amendment doctrine to make this case seem harder than it is. No one has a First Amendment right to deface government property.”

In Newdow v. Roberts (2010), two judges on the three-judge panel ruled that a group of atheists did not have standing to challenge religious language (such as “so help me God”) employed in presidential inaugurals. Addressing the substance of the objection, Kavanaugh held that the language did not violate the establishment clause. “Inaugural prayers are traditionally inclusive and largely non-sectarian,” he wrote. “They typically include many references to God, Lord, and the like, which are considered non-sectarian for these purposes.” His only majority opinion in a religion case involved a claim by evangelical chaplains that the Navy violated the establishment clause by giving Catholic chaplains age waivers so they could obtain retirement benefits. Upholding the district court decision, Kavanaugh found that because the evangelical chaplains could not demonstrate harm to themselves, they lacked standing to challenge the practice.

Perhaps his most significant religion opinion is a dissent rejecting the government’s requirement that religious nonprofits fill out a form seeking an exemption from the Affordable Care Act’s contraception mandate. In it, Kavanaugh embraces Justice Kennedy’s position that the government has a compelling interest in ensuring that women receive free contraceptive services. But is this a sign of moderation or simply a smart jurist’s way of appealing to the high court’s swing vote?

Overall, what Kavanaugh has said about religion law off the bench may be more revealing than what he’s said on it. In 1999, he wrote a friend-of-the-court brief for two Republican congressmen in Santa Fe v. Doe, which challenged a public high school’s procedure for enabling students to offer prayers over a loudspeaker prior to football games. The brief is disturbing less for its inability to recognize why the court might (as it eventually did) find the procedure unconstitutional than for its suggestion that an adverse ruling would afford religious Americans fewer rights than “Nazis and Klan members.”

More seriously, in a speech celebrating the constitutional jurisprudence of Chief Justice William Rehnquist, Kavanaugh makes it clear that he wishes Rehnquist had been able to dissuade the court from finding a constitutional right to abortion. Whether he would at this juncture be prepared to overturn that right is, of course, a critical question.

If Kavanaugh wins Senate confirmation, the best early read on his religion jurisprudence could come from two cases now on appeal to the high court.

One involves the Bladensburg Cross, a 40-foot stone monument in Prince George’s County, Md., built by the American Legion in 1925 as a memorial to those who died in World War I. In March, a narrowly divided 4th Circuit found that it violated the establishment clause and needs to be removed or destroyed.

The Supreme Court has in recent years taken a situation-specific approach to religious displays, with a preference for tolerating long-standing monuments that were put in place without an agenda of advancing a religious purpose. If Kavanaugh were to join a majority in deciding that the cross can stay, the consequences would be minimal.

The other case is an appeal from a unanimous decision in April of the New Jersey Supreme Court, which found that the state constitution bars the use of public funds to support the historic restoration of churches.

If the U.S. Supreme Court were to find that religious edifices have as much of a right to receive public restoration funds as secular buildings, the consequences would be monumental. Across the country, state and local governments would suddenly find themselves under an obligation to pay for repairs to houses of worship.

And they could well have Justice Kavanaugh to thank for it. 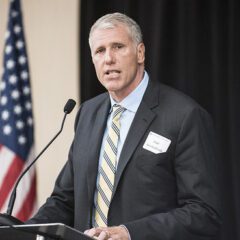