WASHINGTON (RNS) — On Aug. 27, President Trump hosted some 100 people, including evangelical leaders, for dinner and political conversation at the White House. Invitations were reportedly sent out six weeks ahead of time.

This year’s annual call with rabbis ahead of the Jewish High Holy Days seems by comparison to have been an afterthought. Invitations to the call went out with less than a week’s notice, at one of the busiest times of the year for Jewish clergy.

The call has been a subject of controversy in the past. Last year, in the wake of comments by the president that were widely interpreted as blaming both sides for violence in connection with a white nationalist rally in Charlottesville, Va., a group of Conservative, Reform and Reconstructionist rabbis boycotted the call about a month before Rosh Hashanah, one of the Jewish calendar’s holiest days.

When the call, which in previous years had drawn hundreds of rabbis from different traditions, took place, call-ins came largely from Orthodox rabbis.

This year, about a week-and-a-half before Rosh Hashanah, which begins the evening of Sept. 9, there hadn’t been a peep about the call. When Religion News Service sought comment from the White House, officials didn’t respond to three RNS queries over several days.

Then, late in the afternoon on Friday (Aug. 31), the White House sent a save-the-date invitation to rabbis, per an email that a tipster forwarded to RNS.

“You are invited to join President Donald J. Trump and members of his Administration for a national conference call to celebrate the upcoming High Holy Days. The call will be held on Thursday, September 6, 2018 at 12:15 p.m. EST,” Amanda Robbins, of the White House Office of Public Liaison, wrote in the email. “Call-in details will be sent out next week. We look forward to talking with you!”

Just hours before the announcement, the Religious Action Center of Reform Judaism, which organized calls under the Obama administration and which skipped the call last year, told RNS it would step back again this year.

“We are not initiating a call this year, nor have we heard from the administration about a call,” Rabbi Jonah Dov Pesner, director of the RAC, told RNS before the invitation went out. “As with last year, we pray that this season of t’shuva, repentance, will bring about a more just world for all.”

While 70 percent of American Jews identify as Democrat or Democrat-leaning, 57 percent of Orthodox Jews are or lean Republican, according to Pew.

Rabbi Abba Cohen, vice president of federal affairs for Agudath Israel of America (Orthodox), has participated in the calls since their inception and believes last year’s boycotters sent a “very negative, counterproductive message.”

“If the president and the nation reach out to honor the Jewish community, its place in and its contributions to the nation, the Jewish community should embrace it and have the dignity to respond positively,” he said. “It doesn’t mean you have to approve of the president personally or of specific policies, and it doesn’t mean you can’t express opposition.” 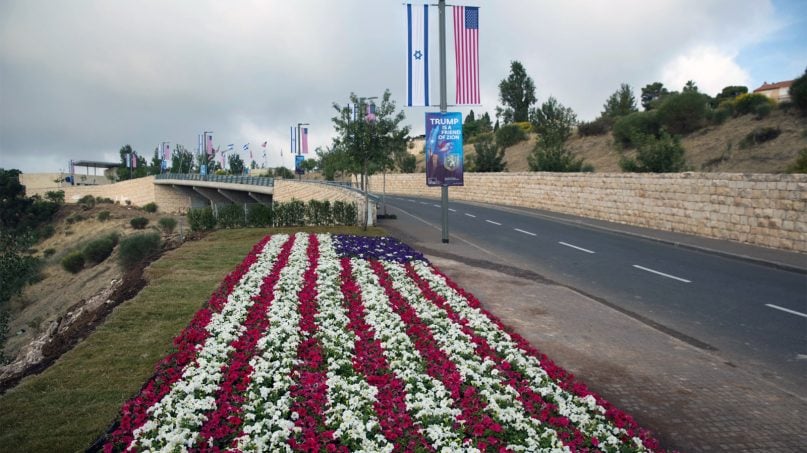 Flowers decorated as an American flag are seen on a road leading to the U.S. Embassy compound ahead of the official opening in Jerusalem on May 13, 2018. The United States moved its embassy in Israel from Tel Aviv to Jerusalem, the holy city at the explosive core of the Israeli-Palestinian conflict and claimed by both sides as a capital. (AP Photo/Ariel Schalit)

Reached four days before the White House sent out the invitation, Cohen was confident a call would be finalized before the holiday. He also figured more colleagues would participate this year due to the president’s decision to move the U.S. Embassy to Jerusalem.

RNS also had contacted rabbis at three Orthodox synagogues in Washington, D.C., all within six miles of the White House. No response was received from Chabad’s Rabbi Levi Shemtov, who organizes the White House’s annual Hanukkah menorah lighting.

Hyim Shafner, rabbi of Kesher Israel, told RNS he would join if invited.

“I’m always happy to participate,” he said. “I know the word has become overused and risks being trite, but I think in our current zeitgeist ‘Tikkun olam’ might be a term to start evoking within the national discourse.” Hebrew for “repairing the world,” the term often appears in Jewish organizational mission statements.

Matt Nosanchuk, former associate director of public engagement and liaison to the American Jewish community under President Obama, said the scheduling delay reflects an “incredible disconnect” between the Trump White House and the broader Jewish community. 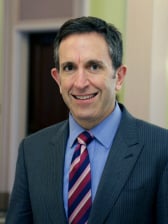 Many Jews disapprove of the president’s policies of separating immigrant families, rolling back LGBT rights and reversing the Affordable Care Act protections, according to Nosanchuk. “You could go down the lists,” said Nosanchuk, vice president at Quadrant Strategies, a Washington-based consulting firm.

A call involving just Orthodox rabbis would undermine what Nosanchuk calls the “force multiplier,” which he saw during his White House time.

Obama knew the call, which could draw 900 rabbis at once just days before they would deliver High Holy Days sermons to their largest annual congregations, would trickle down to the pews, said Nosanchuk.

“The call wasn’t about checking the box — we need to talk to some rabbis,” Nosanchuk said. “It was on the calendar every year, because it was viewed as an excellent engagement because it reached people, who had the opportunity to reach many more people.”

In the Obama White House, the 30-minute call wasn’t meant to be partisan or political. The fact that it was on the president’s regular schedule each year, “something you could count on,” was a powerful statement of the president sharing his time, “the most precious and valuable commodity in the White House,” with American Jews, according to Nosanchuk.

Nosanchuk thinks the Trump administration places less emphasis on public engagement with diverse religious groups than did its predecessor. “This White House and this president engage with the community through different means — at 2:30 in the morning,” he said. 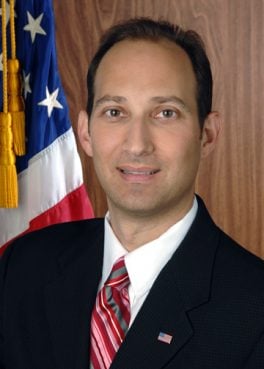 Presidential historian Tevi Troy, who was White House liaison to the Jewish community in President George W. Bush’s administration, pushes back against the strategy of using a call to rabbis before the High Holy Days to encourage preaching politics from the Rosh Hashanah or Yom Kippur pulpit.

“I don’t think the call should be about ‘Here’s what we are doing politically, and we want you to advance our political agenda,’” he said.

In the Bush White House, Troy doesn’t remember any pre-High Holy Days calls with rabbis, but President Bush introduced a Hanukkah party in the president’s residence with kosher food. Troy and colleagues were also conscious of precedent, and Bush shared messages to the public before Rosh Hashanah and Passover.

In the Orthodox synagogues Troy has been part of in the past 30 years, rabbis tend to preach from the weekly Torah portion, not about politics. When a rabbi did address an issue of the day, such as conflict in Gaza or the Sept. 11 attacks, “he almost apologized for bringing up the day-to-day political concerns,” Troy said.

“I don’t think the synagogue is the place for the rabbi to give a political message,” he said.