CHICAGO (RNS) — Heather Larson stood before the congregation in August at Willow Creek Community Church’s main campus in Chicago’s northwest suburbs, as the church gathered for a weeknight “family meeting.”

She recalled a similar meeting, less than a year earlier, when she had stood on the same stage to announce very different plans: Founding pastor Bill Hybels would be retiring, and Larson would take over as lead pastor. Her colleague, Steve Carter, would become the lead teaching pastor. Hybels would coach them through the transition.

“Things have really changed,” she said.

Plans for Willow Creek’s future unraveled in March when several women publicly accused Hybels of sexual harassment and misconduct. Though he denied the accusations, Hybels retired early in April after more than 40 years as pastor. 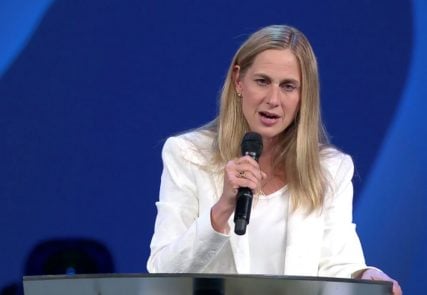 Less than 40 days later, his successors stepped down as well, along with the church’s entire elder board. All admitted they had mishandled the allegations against Hybels, initially backing their former pastor and calling the women’s claims lies.

At that family meeting in August, Larson said it was time for a fresh start.

“This is really important. Trust has been broken by leadership, and it doesn’t return quickly,” she told the congregation. “There is urgency to move us in a better direction.”

Steve Gillen, who had pastored one of the church’s smaller campuses, was named interim lead pastor. And last week, the church and the Willow Creek Association named four outside leaders to oversee an investigation into the allegations against Hybels and culture of the church and association.

But the church’s future remains uncertain.

For decades Willow Creek had been held up as a model for how evangelical Christian megachurches should be run—both in the U.S. and around the world.

Now it faces an existential crisis.

Julia Williams—who attended Willow Creek in the 1980s and has accused Hybels of misconduct—wants to see the church be the leader it always has been.

“They prided themselves on being the model all these years and they failed,” she said. “But now they could be the model for how to fix this. That’s what I’d love to see.

“But the way they’re going at this, I’m not hopeful.”

Vonda Dyer, a former Willow Creek staffer, said the church has to start by having an honest discussion about power—and how power can be abused in church settings.

Dyer was one of the first women to publicly accuse Hybels of misconduct. She told the Chicago Tribune Hybels had invited her to his hotel suite on a work trip, kissed her and indicated he and she, then director of the church’s vocal ministry, could lead Willow Creek together. 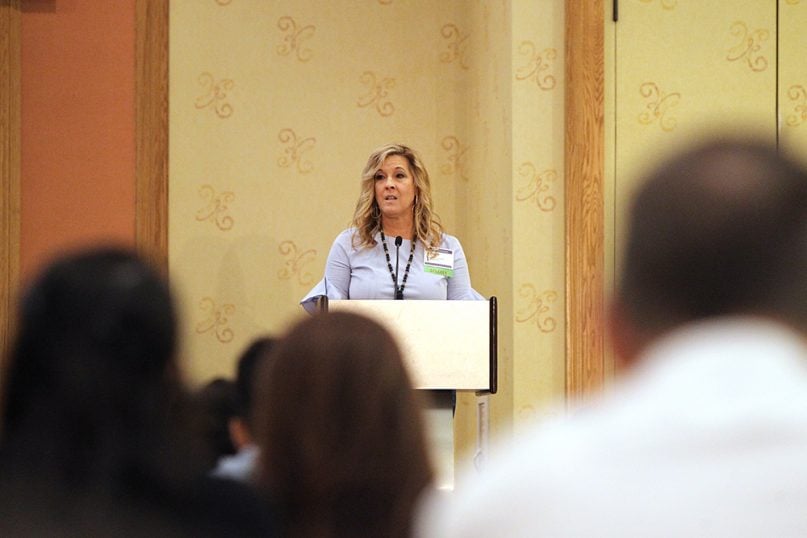 Vonda Dyer speaks during the “#MeToo in Sacred Spaces” panel at the annual conference of the Religion News Association on Sept. 14, 2018, in Columbus, Ohio. RNS photo by Kit Doyle

Since then, she has heard countless “heartbreaking” stories, not just from women at Willow Creek but also from women at churches across the country, she said.

The gossip, bullying, shaming and blaming she has seen in response lead her to believe this is a systemic problem within evangelical Christian churches.

What happened at Willow Creek is “a tragic example of what happens when you elevate one person to a position where there is minimal accountability,” said Tchividjian, a former attorney with experience in cases involving sexual abuse and founder of GRACE (Godly Response to Abuse in the Christian Environment). He advised some of the women who came forward with allegations against Hybels.

“There is an adoration of this person almost like a demagogue,” he said.

As a result, he said, a powerful church leader will surround himself with people who are loyal to him instead of people who actually can and will hold him accountable.

The troubles at Willow Creek also illustrate the danger that comes “when a church becomes big business,” Tchividjian said. When a leader is well loved and when jobs and institutions rest on his success, he said, “Why would you want to throw a wrench in all of that and risk bringing all that down?”

Ironically, Willow had been known as a place where female leaders were empowered in ministry. That’s made the church’s response confusing and disappointing, said Tchividjian.

Williams also feels Hybels surrounded himself with people who would protect him, rather than hold him accountable. And their initial response sent a clear message that anyone who questioned Hybels would be publicly attacked, dissuading other women who might come forward.

Willow Creek’s internal structures will be tested in the months to come, said David Eagle, an associate in research at the Center for Health Policy and Inequalities Research at Duke University who has researched the history of modern megachurches.

So will whether the church can stand on its own, without its founder, Eagle said. He compared Willow Creek to Mars Hill Church, once an influential evangelical megachurch with 15 campuses in Seattle.

Mars Hill closed in December 2014 after founding pastor Mark Driscoll resigned from the church amid allegations that included plagiarism and abusive behavior. Some of the church’s campuses went their own way. Eagle suspects Willow Creek is big enough to “weather this and get through.”

“But I don’t think it’s a foregone conclusion, and especially if the accusations against Hybels get worse,” he said.

Scot McKnight, an author and professor of New Testament at Northern Seminary, believes Willow Creek will become a case study in how church leadership can fail.

“Seminaries around the world will discuss the ‘Willow Creek Case’ for years,” he wrote recently on his popular blog.

McKnight attended Willow Creek for about a decade and loves the church, calling it “a flagship church of influence in the United States and in the world.” Because of its success, he told RNS, Willow became both “the pride and envy of many churches.” Its collapse of leadership has left some feeling betrayed and others feeling vindicated.

McKnight can’t say what will happen now, he said. He has no reason to think the church won’t survive, but it certainly won’t survive as it was.

“Willow will never be the same again,” he said.

Maureen “Moe” Girkins, former president of Zondervan, a major Christian publisher, also believes Willow Creek could emerge from the current crisis—different, but stronger than ever.

Girkins had her own run-ins with Hybels, who she said coerced her repeatedly into spending time alone with him on his boat, the church’s plane and his home. She believes the church has talented, godly people and does great ministry, despite Hybels’ failings.

“They are just a phenomenal church, and I would hate to even imagine something like the Mars Hill thing happening to them. I would like to believe they are going to survive,” she said.

Still, Girkins said, there are a few things she thinks Willow Creek needs to get right—and soon.

The church needs to get to the truth of what went wrong and be transparent about its failings. It also needs to find the right new leader, she said. It needs to fix its culture.

And people in the congregation need help as they grieve and heal. That will take time, she said, and church leaders—current and former—will need to resist the temptation to move on too quickly. 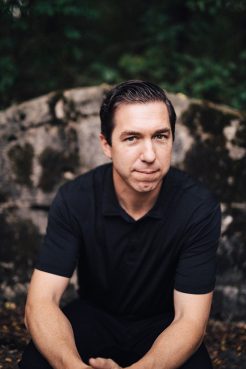 Girkins expressed concern that Carter, the church’s former lead teaching pastor, already has announced plans for a book about why he left the church. As a former publisher, she said, she thinks it would be a different book if he took time to pray, reflect and heal.

There’s precedent for a megachurch recovering from the public failings of its founder.

New Life Church in Colorado Springs went through several years of struggle after founding pastor Ted Haggard imploded. Haggard resigned amid allegations he had used drugs and engaged in extramarital sexual activity with a male escort. Later, it also emerged he had had an inappropriate relationship with a young man at the church.

Brady Boyd was named Haggard’s successor. When he took the job 11 years ago, he thought he might be coming to New Life as a hospice chaplain to give it a “good church funeral, close the doors, sell it, make it a civic center or whatever and move on.”

But now New Life is thriving, and Boyd said he is praying Willow Creek can recover from this crisis as well.

“The very center part of our faith is a resurrection story,” he said.

It will take time and new leadership for the Chicago-area church to rebuild trust with its congregation, he said. He suggests starting with the basics: worship, prayer, Scripture, sacraments.

Boyd said the church needs to give special care and attention to women who came forward.

“They are brave, they paid a price for their confession and they need genuine support and care, period,” he said.

The congregation also needs support, he said, and he plans to visit soon to offer encouragement. So does Hybels, who needs to repent and needs restoration for the sake of his soul, he said.

During an interview with RNS, she quoted a verse from the biblical book of Isaiah a friend had sent her about trading ashes for a crown of beauty, mourning for gladness.

“I would like nothing more than for Bill and the women he wounded to know that that is possible for them and there can be healing and restoration,” she said.

Willow Creek has already seen some fallout from the turmoil of the past few months.

About 38,000 fewer people across the country tuned into the live stream of the Willow Creek Association’s Global Leadership Summit in August.

Attendance is down 9 percent from this time last year across Willow Creek’s eight campuses in and around Chicago—15 percent at its main campus in South Barrington alone. An update from the church reported that decline in attendance at the main campus had started before allegations against Hybels were made public, though. 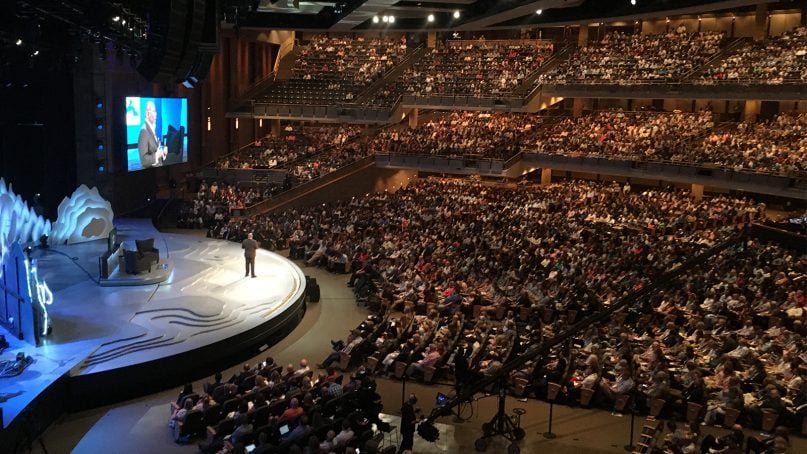 The main campus of Willow Creek Community Church in South Barrington, Ill. The megachurch has been in turmoil for months since sexual misconduct allegations have come to light against its founder, Bill Hybels. Photo courtesy of Global Leadership Summit

As a representative of the church’s elder board announced at the August family meeting that each elder would step down by the end of the year, she called on Hybels to admit his sin and apologize. He has not.

In his most recent public statement to the New York Times answering allegations he had groped and once had oral sex with his former assistant Pat Baranowski, Hybels denied ever having an inappropriate physical or emotional relationship with her.

The mood at Willow Creek is “exceedingly tenuous,” said Rob Speight, who has been an active member of the church for more than 25 years.

Speight believes the congregation and staff at Willow are divided. Some believe the women who have accused Hybels are telling the truth. Some doubt the women and believe Hybels was forced out by disgruntled ex-staffers—a claim Hybels and other leaders at Willow initially had made.

Many others simply want to move on. But the church first has to deal with the “harsh, dirty reality” of its failings, he said. The truth must be told. Space must be made for grief, mourning and lament.

Then the healing can begin.

“Don’t give up on Willow Creek, everyone,” Speight blogged. “I haven’t.”

Gillen, who has led the church as interim pastor since August, also told RNS in an email that he is very hopeful for the future of Willow Creek.

“God is doing a good work in our church even in the midst of this season of pain,” Gillen said.