CHICAGO (RNS) — Steve Carter was supposed to be in front of his congregation interviewing Ira Glass, the famed NPR journalist and host of “This American Life.”

Instead, the lead teaching pastor at Willow Creek Community Church was throwing up backstage.

Carter, 38, had become physically ill that Sunday, Aug. 5, after reading an article published that morning in The New York Times about the church’s founding pastor, Bill Hybels. The newspaper reported allegations from Hybels’ former assistant Pat Baranowski, who said that Hybels had fondled her breasts, rubbed against her and once engaged her in oral sex.

For months, the evangelical Christian megachurch in the Chicago suburbs had been rocked by allegations of sexual misconduct against Hybels. Reading Baranowski’s story was “a breaking point,” Carter said.

“I felt like my body was shutting down,” Carter told Religion News Service.

While church leaders scrambled to respond to the Times report, Carter walked out the door, went home and began typing out his resignation. As soon as services ended, he announced his departure on his blog.

“The new facts and allegations that came to light this morning are horrifying, and my heart goes out to Ms. Baranowski and her family for the pain they have lived with,” he wrote. “These most recent revelations have also compelled me to make public my decision to leave, as much as it grieves me to go.”

In his first interview since leaving Willow Creek, Carter spoke with RNS about his decision to quit, his feelings about its founding pastor and the questions he still has for the church.

He’s also written a book about why he left Willow Creek, called “Everything to Lose: Doing the Right Thing When the Stakes Are High,” which will be released in November.  The book, from publisher David C. Cook, replaces one Carter was planning before his departure, focusing on his leadership role at the church.

Carter said he was inspired to listen to his own doubts by Baranowski’s story.

“Pat’s story was pretty brave,” he said. “I thought, what’s the brave thing I am supposed to do?”

Leaving Willow Creek meant giving up a prestigious role at one of the most influential churches in the country. 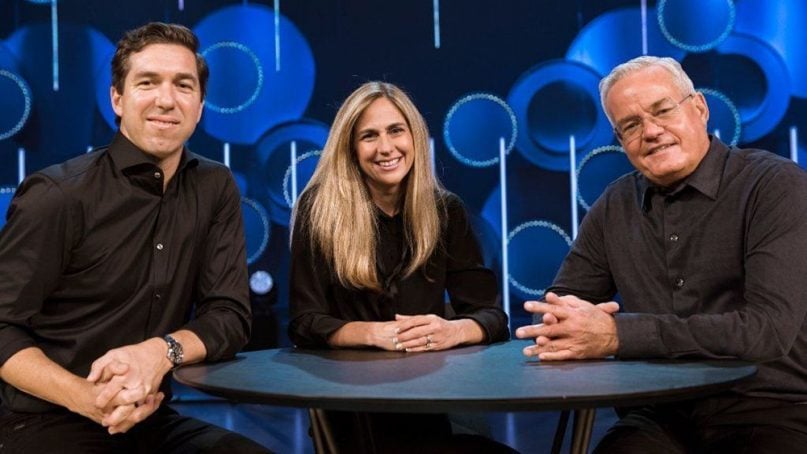 Last year, before the allegations against Hybels had surfaced, Hybels announced his plan to retire in the fall of 2018. He appointed Carter and Heather Larson to succeed him in the roles of lead teaching pastor and lead pastor, respectively.

But the two found themselves in those roles six months earlier than planned. In March, an investigation by the Chicago Tribune revealed allegations of inappropriate behavior with women by Hybels. Several women said Hybels had invited them to hotel rooms or made suggestive comments about their appearances. In one case, Hybels allegedly kissed a co-worker against her wishes.

RELATED: As Willow Creek reels, churches must reckon with how power corrupts (COMMENTARY)

Willow Creek initially denied all the allegations and claimed former church members were colluding to ruin Hybels’ reputation and harm the church. Soon afterward, Hybels retired early. The allegations against him have continued to surface — some dating back decades, according to Christianity Today.

Carter blogged about some of his concerns with the way the church was handling the allegations in late June and offered an apology for the church’s initial response, writing, “I recognize that I am not blameless in this.” He also offered to resign at that time. Other leaders at the church asked him to continue in his role until they decided how to make his resignation public, he said.

It was the most detailed account of alleged abuse he had heard — including her accounts of conversations with Hybels, which she had kept in a series of journals.

And it didn’t fit Willow Creek’s narrative. The church’s elders had hired an outside firm to conduct a thorough investigation into Hybels’ conduct. But no one, it seems, had talked to Baranowski, an administrative assistant who had worked closely with him for years.

“I assumed that they would have done that. They must not have ever talked to her,” he said.

So, he decided, “For my own integrity, I don’t think I can do this anymore.”

Three days after Carter left, Larson and the entire Willow Creek elder board apologized for mishandling the accusations against Hybels and announced they too were stepping down — Larson immediately, and board members by the end of the year.

Carter’s feelings about Hybels still are mixed, he said. Before Hybels’ resignation in April, he repeatedly denounced the accusations as lies. Carter even stood on stage with Hybels when he made those claims — a decision he now regrets.

But Hybels is a friend and mentor, someone who has had a profound impact on Carter’s life, someone Carter loves. Hybels was hard on him, pushing him to be better, he said. But he was also good to Carter.

Still, Hybels wasn’t the man Carter thought he was. He knows that the women who say they experienced harassment from Hybels had a much different experience, he said, and he has reached out to them since leaving the church.

For now, Carter said he has been focused on three words: Grieve. Breathe. Receive. He is working through the grief of leaving a church and congregation he loves and not rushing into anything new. He’s focusing on his own spirituality and asking God what he should do next.

Aside from the book, he’s planning to do some speaking and to keep working on a podcast about sports and religion that he co-hosts with Chicago Bears linebacker Sam Acho. Carter and his wife, Sarah, also are supporting a crowdfunding campaign to provide counseling for victims of abuse.

And he wants to believe Willow Creek can be saved.

That starts, he said, by confessing the church’s sin and acknowledging its failures. Willow Creek leaders announced this past summer that a team of outside Christian leaders would conduct an investigation into Hybels’ conduct and the church’s actions. The details of how that investigation will proceed are expected to be made public this week.

Carter still has faith in the people of Willow Creek. They have continued to volunteer, to give, to serve their neighbors despite all the turmoil, he said.

“I think the people of Willow are really strong. They love the church,” he said. “That’s one of the pieces that really breaks my heart.”