(RNS) — This week witnessed the release of the Liberty University-produced film “The Trump Prophecy,” in which it is claimed that Donald Trump’s election in 2016 can be attributed to divine intervention.

It is striking enough that the evangelical Christian leaders who supported the film believe they are in a position to discern and proclaim God’s will. This is some serious chutzpah — a word, and concept, apparently unknown to those who made the film.

At the heart of the movie, however, is a particular claim that Trump is the King Cyrus of our times.

Cyrus the Great was the king of Persia in the second half of the sixth century BCE, given his impressive title by virtue of having conquered the mighty Babylon, along with most of the rest of the ancient Near East. He ruled over the greatest empire the region had ever seen.

The Bible gives him an even more significant title: messiah. For when Cyrus conquered Babylon, he allowed the Israelites who had been exiled there some 50 years earlier to return to their native land, to govern themselves according to their native laws and to rebuild the Temple in Jerusalem, the center of their religious life. For this, the book of Isaiah declares that Cyrus was anointed — the original meaning of the word “messiah” — by God to deliver the Israelites.

For the creators of “The Trump Prophecy,” the comparison with Cyrus has obvious appeal. It emphasizes the global power of the U.S. presidency. It implicitly condemns the previous administration: the exile from God that Trump is now reversing. And it makes Trump out to be the savior of God’s people, permitting them to live and worship as they please. (Cyrus may have claim to be the inaugurator of the concept of “religious freedom.”)

But there are some rather strange aspects to the comparison as well. The most apparent is the fact that Cyrus was an external conqueror, a foreigner. There is an admission here that though he may be beloved of the Christian right, Trump is not in fact one of them. Trump, like Cyrus, is a pagan: not a worshipper, but a tool of God.

This is often admitted by Trump’s “court evangelicals,” as historian John Fea has termed them. But it does undercut the equally common claims that Trump is a real man of God.

It is easy enough to see why the biblical prophet saw Cyrus as divinely sent: The return of the Israelites and the rebuilding of their temple could hardly be other than providential.

But why would Cyrus do it in the first place? Here is where the equation with Trump becomes most interesting, and potentially revealing. 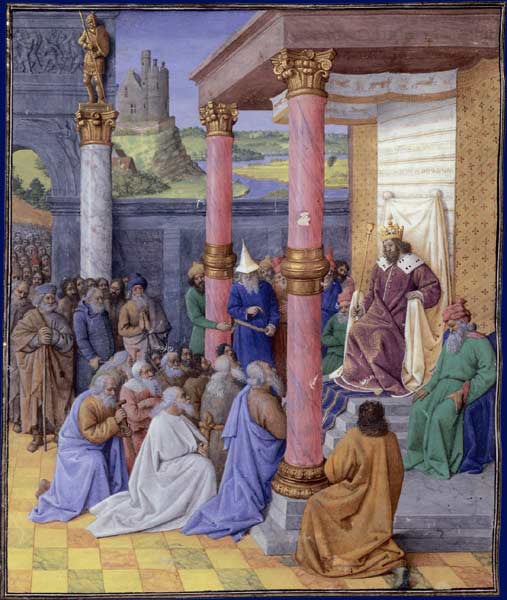 This is a depiction of the biblical character Cyrus the Great of Persia, by Jean Fouquet, created circa 1470. Image courtesy of Creative Commons

The restoration of peoples to their lands, and the permission for them to self-govern (with Persian imperial oversight), was a broad policy under Cyrus. It was not just the Israelites he treated this way. The policy had administrative payoffs — it is easier to supervise a relatively self-governing group than it is to enforce Persian laws in a foreign and resistant land — but also, and perhaps predominantly, was a remarkable coup of propaganda.

When Cyrus conquered Babylon, he did not declare that he and his gods had defeated Babylon and its gods, as would have been typical at the time. Instead, he announced — not without his own brand of chutzpah — that it was the gods of Babylon who had brought him there.

By appropriating local religious beliefs, Cyrus was able to authorize his imperial domination and curry favor with the conquered peoples.

This is what happened in Israel as well. The declaration in Isaiah that Cyrus is God’s anointed ruler is not Israelite prophecy; it is Persian propaganda. The biblical writers bought what Cyrus was selling, and elevated him to the level of a David or Solomon.

The parallel with Trump and his evangelical prophets is so close that one might be tempted to believe it was foretold long ago. Trump too has effectively spoken the language of the religious right, promising them a return to their cherished customs and beliefs. (They’ll be able to say “Merry Christmas” again!)

Like Cyrus, Trump seems for all the world not to care about the actual religious beliefs he is supporting. What he wants is free rein to do as he likes — with the support of those whose local authority he is propping up. He has offered them access to the halls of power — though not to the real power itself. And they have bought what he is selling, and declared him, quite literally, to be a messiah figure.

It may all seem a bit ridiculous, of course. But there is an important historical lesson here. For though Cyrus restored Israel to self-governance, there would never be another Israelite king. The ceding of power to Cyrus marked the end of Israel’s native form of government. Proclaiming Trump to be a modern-day Cyrus is, implicitly and perhaps even unconsciously, to suggest that our own native form of government may have come to its untimely end.

(Joel Baden is a professor of Hebrew Bible at Yale Divinity School. The views expressed in this commentary do not necessarily represent those of Religion News Service.)