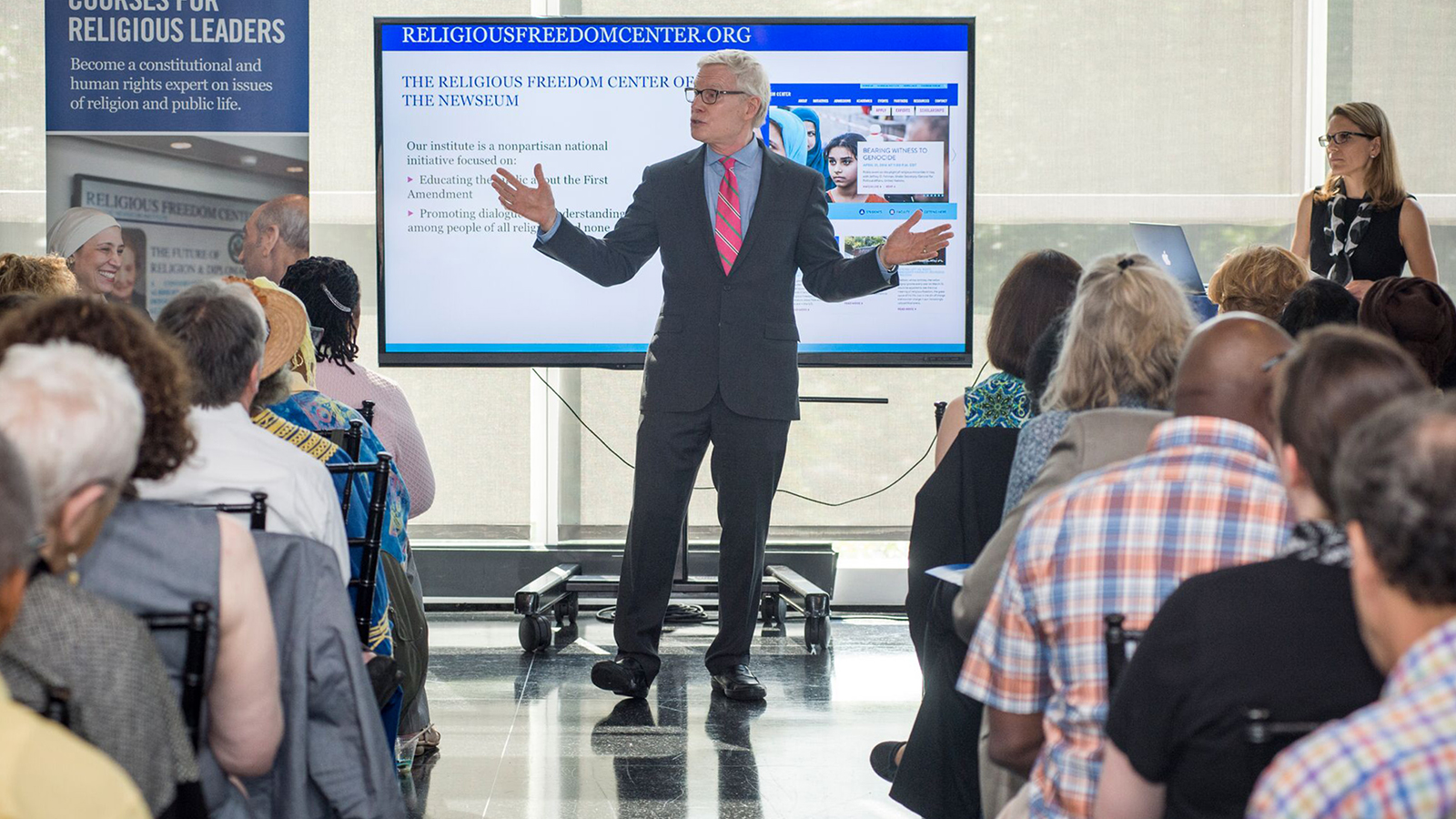 WASHINGTON (RNS) — Charles Haynes, a First Amendment scholar, has spent more than two decades helping schools walk the line between religion and state and advocating for the rights of people of a range of faiths and no faith.

Over the past year, Haynes, 69, has been in the process of retiring from the Freedom Forum Institute's Religious Freedom Center, continuing to serve as an adviser as he makes plans to write and volunteer in the future. The author and speaker says it “lifts his heart” when he can gather representatives of groups ranging from People for the American Way to the National Association of Evangelicals — along with Hindus and humanists — around the same table.

He will be honored Wednesday (Oct. 24) at a ceremony at the Newseum.

Haynes talked to Religion News Service about the state of religious freedom in the nation, his hopes and worries about its future, and his little-spoken-of personal faith. The interview has been edited for length and clarity.

Why did you decide to retire?

Oh gosh, there are so many reasons. I think the time has come for me to pass the torch to a new generation of leaders and to dedicate myself to guiding and mentoring as we transition into a new era in the work of religious freedom. I also, of course, have personal projects, writing projects and things that I would like to do. I thought this would be a good way to carve out some time for those personal things, but at the same time guide the center and its future.

What will you be doing next?

Well, first and foremost, I'm going to continue to try to be a voice for religious freedom and liberty of conscience, which has been my lifelong passion. I'll continue to chair the Committee on Religious Liberty, which is now housed at the Religious Freedom Center. And then I want to develop my spiritual life and writing and contemplation. My spiritual life is deeply important to me and to have more time to nurture that and develop that and to write about that is something I'm looking forward to. And then thirdly, I really feel called to do more to serve directly people in need. I just feel a special calling to address the issue of homelessness. It certainly could be as modest as simply volunteering and working with people in a shelter.

Religious freedom is a rallying cry from people of a variety of perspectives these days. How do you define it?

My definition is rooted in our framing documents as a country and our center is committed to upholding those first principles. It's grounded in the Constitution with its First Amendment. So no religious test for office in the Constitution itself, then no establishment and guarantee of free exercise. Those core principles, I think, define the arrangement, the principles that guide us and allow us to live with even our deepest differences.

You co-authored guidelines on religious liberty and public schools that the Education Department distributed across the country. The first chapter is entitled “From Battleground to Common Ground.” Over the last two decades, has that trajectory continued or has it gone in the opposite direction with more battles than agreement?

I think in public education we've made great strides in moving from battleground to common ground. It's not often noticed but over the last three decades public schools have gone from either being places where religion was kept out and not mentioned in the curriculum or being places where one religion continued to be imposed even after the Supreme Court's decision saying that was unconstitutional.

Thirty years later, there is more student religious expression today in public schools than probably anytime in the last hundred years. There's more teaching about religions in the curriculum today, constitutionally, than probably in anytime in our history now. That's dramatic change. 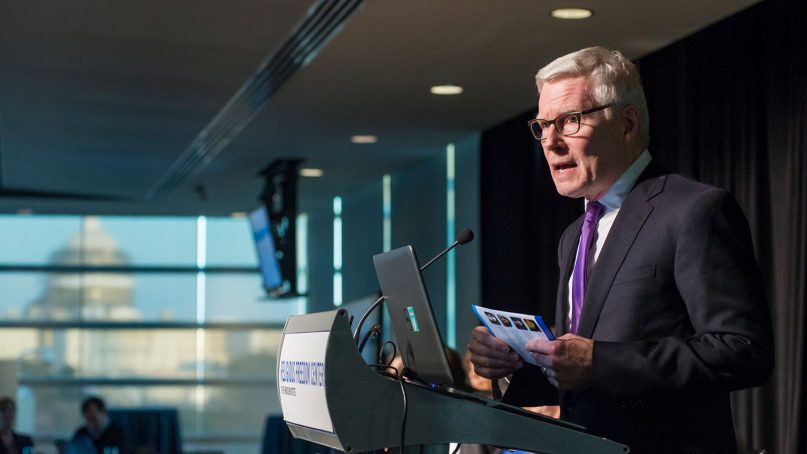 Charles Haynes addresses an event at the Religious Freedom Center of the Newseum in Washington, D.C. Photo by Maria Bryk

Is there something that you hope for with schools and religious freedom that has not yet occurred?

The biggest missing piece is that many school districts still don't have their own local policies on how to get this right. I am calling for a proactive approach in the local community to these issues rather than waiting until there is a fight or conflict or a question they can't answer. If I have a disappointment at this juncture, it's that I haven't persuaded more school boards and administrators to really tackle this proactively and not wait until there's a fight.

Generally, gay rights and religious rights have been in a tug of war in many people's minds in recent times. Given all this consensus that you've just talked about, do you see any way that the continuing conflicts over nondiscrimination and religious liberty can be resolved?

We have to have the civic will to resolve these conflicts, and I don't see enough of that right now. There are some people who are working hard to create a more civil dialogue on that conflict. (University of Illinois College of Law) Professor Robin Fretwell Wilson (and state) Sen. Stuart Adams in Utah are working on what they call the Fairness for All campaign. That's a good example of trying to help state legislatures do what they did in Utah to work out the compromise legislation. But, unfortunately, too many people on different sides of this issue, in my view, still have a zero-sum game approach to these fights: “We're going to win it all.” I tell my friends: We're all a religious minority, a sexual minority, somewhere in the country and we need as Americans across our differences to learn how to protect the rights of others.

I do have to ask you about the Trump administration, which has proclaimed its dedication to working on religious freedom, including the State Department having a ministerial on the subject this year and the president signing executive orders with the intent of helping clergy and employers follow their religious conscience. Do you see substantive advances on religious freedom since President Trump took office?

I think on the question of international religious freedom, there are many people who are serving now in the Trump administration who have served in other administrations who genuinely believe that the United States must put religious freedom at the heart of our foreign policy. I think this is not new, but I think that it is continuing under this administration and I'm grateful for that. I can't speak for what the president himself believes about this or doesn't believe, but I think that the people working on this in the State Department and the people that convened from many different perspectives and faiths to talk about this with the State Department, I think that's a genuine effort for a nonpartisan commitment to international religious freedom.

What about on the domestic front? Do you think the Trump administration has advanced or helped religious freedom in any specific way?

On the domestic front, I'm concerned the administration has risked dividing us further on religious freedom. It's bad enough that religious freedom has to be put in scare quotes now by some people because people don't believe that that phrase any longer represents something we all support. I think that the poisoning of the well for nonpartisan collective support in this country for religious freedom is a great danger. And when we have a religious liberty task force created from the Department of Justice that appears to really be interested in one cluster of issues, and that is, of course, for the LGBT versus religious claims, that raises all kinds of red flags for people who want to support religious freedom but don't want it to become, as the expression goes, a sword rather than the shield. They don't want to weaponize this issue and make it more difficult to find any common ground.

Are you worried or hopeful about the state of religious freedom in this country and beyond it?

Well, I worry. This is the moment we're being tested and I have concerns that we may fail this test. Millions of Americans feel as though they are not fully American and not totally safe in their communities to wear their religious garb, to worship openly and freely, to be Americans and also to be a Muslim or a Sikh or a Hindu. When people feel that way, there’s no religious freedom. The idea that a court decision or a lawyer is going to protect them or save this arrangement is a faint hope because that's not how it works. What protects religious freedom is people in the local community willing to live out this vision of pluralism in a way that protects the rights of all.

What is your religious affiliation and has it changed over your lifetime?

My career has been defined by making sure that my own religious convictions or political convictions don't get in the way of finding common ground and being an honest broker. Having said that, of course, I have my own religious convictions and they have evolved and changed. At heart, I'm Episcopalian and I've been a lifelong Christian. I went to seminary and I didn't go the ordination route. I have migrated from the (United) Methodist Church to the Episcopal Church. At the same time, I have been deeply influenced by the great Indian spiritual master Meher Baba, who passed away in 1969. But I met him actually as a young child and I traveled to India to see him when I was only 13 and with my family and that encounter and that influence has deeply shaped my life. I don't think I ever really understood my Christian faith until I met Meher Baba. He was someone who really helped me to see so much of the universal truths in the various great religions of the world and helped me to really find a deeper relationship with God.

So how would you sum up how your personal faith, given what you just told me about this trajectory you've had, informs your work on freedom for people of all faiths and none?

I have a deep conviction. My faith tells me that religious freedom is rooted in the inviolable dignity of every human being and that informs everything I do. Whatever their faith tradition or whether the person has no faith tradition, that inviolable dignity of the human is at the heart of my commitment to religious freedom for every human being. And also, my understanding of the gospel is close to what I gathered (17th-century religious liberty advocate) Roger Williams believed. And that is that the gospel is about recognizing that God has created every human being with freedom of conscience. I don't bring this into my work and preach it from the rooftops, but it's what motivates me. To me, it's not a choice that we give people or protect people's religious freedom. For me, it's a requirement of faith. It's what God requires.