WASHINGTON (RNS) — President Trump marked his second National Day of Prayer at the White House by signing an executive order he said would protect the liberty of religious groups and give them fair access to government funds.

The new White House Faith and Opportunity Initiative will foster policies that acknowledge the “vital role of faith” in families, communities and the country, he said Thursday (May 3).

The ceremony, where Trump was surrounded by faith leaders, also coincided with the release of new reports on a scandal over the president’s alleged affair with an adult film star, who says she was paid during his run for office to be quiet about it.

The event also drew criticism from some religious leaders who accuse Trump of vilifying Muslims, privileging the rich over the poor and favoring the religious views of white evangelical Christians, who voted for him in overwhelming numbers.

The Rev. William Barber, a leader on the religious left, tweeted: “For @POTUS & @VP to stand in the Rose Garden for #NationalDayOfPrayer while promoting policies that hurt the least of these is height of hypocrisy. For some clergy to stand there & endorse this is a sham.”

For @POTUS & @VP to stand in the Rose Garden for #NationalDayOfPrayer while promoting policies that hurt the least of these is height of hypocrisy. For some clergy to stand there & endorse this is a sham. 1/

Trump said his initiative would help assure that the government supported people of faith.

“This office will also help ensure that faith-based organizations have equal access to government funding and the equal right to exercise their deeply held beliefs,” he said. “We take this step because we know that in solving the many, many problems and our great challenges, faith is more powerful than government and nothing is more powerful than God.”

The audience in the sun-drenched Rose Garden applauded and a select group, including several evangelical leaders who have long advised him unofficially, gathered around the desk where Trump sat to sign the executive order. One — author Eric Metaxas — tweeted afterward about his delight at receiving one of the pens from the event.

The pen itself. Amazed. My friend @greglaurie is peeved he didn’t get one. pic.twitter.com/woY1bIAEGx

The order, which succeeds similar efforts by the previous two administrations, changes the name of the most recently named White House Office of Faith-Based and Neighborhood Partnerships. It notes that federal departments and agencies that do not currently have a center on faith-based issues will designate a liaison to the new office and coordinate with the as-yet-unnamed adviser who will lead it.

Citing an October memorandum, the order says that all agencies of the administration will notify the attorney general of “concerns raised by faith-based and community organizations about any failures of the executive branch to comply with protections of Federal law for religious liberty.”

The order also said the initiative would draw on the expertise of faith and community leaders outside the federal government, including “State, local, and tribal governments,” to discuss topics such as poverty alleviation, substance abuse and addiction, strengthening marriages and families, and helping prisoners re-enter society. 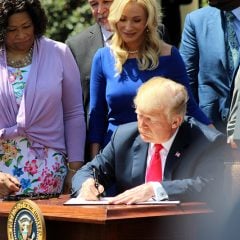 President Trump signs the White House Faith and Opportunity Initiative executive order during a National Day of Prayer event in the Rose Garden of the White House on May 3, 2018, in Washington. RNS photo by Adelle M. Banks The Hope Christian Church choir performs during the National Day of Prayer event at the White House Rose Garden on May 3, 2018. RNS photo by Adelle M. Banks 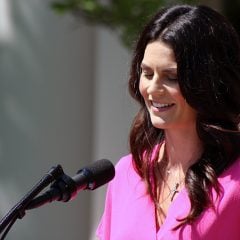 Cissie Graham Lynch, granddaughter of the late evangelist Billy Graham, leads a prayer during a National Day of Prayer event at the Rose Garden of the White House on May 3, 2018, in Washington. RNS photo by Adelle M. Banks Hindu priest Narayanachar Digalakote prays during a National Day of Prayer event at the Rose Garden of the White House on May 3, 2018, in Washington. RNS photo by Adelle M. Banks

President Trump passes out pens after signing the White House Faith and Opportunity Initiative executive order during a National Day of Prayer event in the Rose Garden of the White House on May 3, 2018, in Washington. RNS photo by Adelle M. Banks

During his remarks, Trump called to the podium two men who are now close friends united in efforts to aid prisoners — Jon Ponder, a one-time bank robber once held in solitary confinement, and Richard Beasley, the FBI agent who arrested him. Ponder is now the CEO of Hope for Prisoners, a Las Vegas nonprofit that assists with the transition out of prison.

“Your story reminds us that prayer changes hearts and transforms lives,” Trump told them. “It uplifts the soul, inspires action, and unites us all as one nation, under God. So important.”

“The announcement of President Trump’s faith initiative is further evidence that this administration is not only committed to protecting our First Freedom but in also acknowledging that our faith in God contributes to the guidance and well-being of our country,” Perkins said. “No longer are Americans punished or excluded from the public square because of their faith, rather they are welcomed and protected by our government.”

Nathan Diament, executive director for public policy for the Union of Orthodox Jewish Congregations of America, attends a National Day of Prayer event at the Rose Garden of the White House on May 3, 2018, in Washington. RNS photo by Adelle M. Banks

Another who attended the event was Nathan Diament, executive director for public policy for the Union of Orthodox Jewish Congregations of America and a participant in previous administrations’ work with faith-based groups.

“This bipartisan continuity is an important statement of principle and rebuttal to those who would seek to have government policy discriminate against faith-based entities,” Diament said.

Leaders of groups long concerned about church-state separation expressed worry and caution as they looked for more details about the administration’s plans.

Rachel Laser, executive director of Americans United for Separation of Church and State, said the executive order on religious liberty that Trump signed at last year’s National Day of Prayer ceremony led to policies that harmed LGBTQ people and women.

Others are concerned about how diverse a new council of advisers — called for in the executive order — would be in an administration headed by a president who once called for “a total and complete shutdown of Muslims entering the United States until our country’s representatives can figure out what is going on” and who regularly seeks advice from members of an informal council composed only of evangelicals.

“We didn’t use faith to score political points for our preferred candidate, or to gain special privileges for one religion or ideology over others,” said the Rev. Jennifer Butler, former chair of the White House Council on Faith-Based and Neighborhood Partnerships, and CEO of Faith in Public Life.

“I encourage the new council to respect the important constitutional boundaries between church and state and to stand up to President Trump’s misguided attacks on vulnerable people,” Butler said.

RELATED: From Washington to Wyoming, leaders and locals prepare for prayer day

The White House ceremony began with a choir singing gospel music, including Hezekiah Walker’s “I Need You to Survive,” and featured prayers by evangelical, Catholic, Mormon, Jewish, Muslim and Hindu speakers before Trump entered to applause.

When Cissie Graham Lynch, granddaughter of the late evangelist Billy Graham, prayed “in the precious name of Jesus,” the crowd agreed with amens. When she was followed by a Hindu priest, Narayanachar Digalakote of Lanham, Md., who mentioned different divine incarnations before saying “May God bless all the leaders, the lawmakers with the finest insight,” many participants kept their hands in their laps while others applauded his prayer.

At the conclusion of the event, as the applause subsided for the last time, a reporter in the back of the crowd shouted a question about Trump’s reaction to the latest juncture in coverage of the scandal about adult film actress Stormy Daniels, who says she was paid during his run for office to keep quiet about her affair with Trump. A supporter in the audience shouted back: “Shame on you!”

Earlier, the White House issued Trump’s proclamation declaring May 3 as the National Day of Prayer.

“May our Nation and our people never forget the love, grace, and goodness of our Maker, and may our praise and gratitude never cease,” he wrote. “On this National Day of Prayer, let us come together, all according to their faiths, to thank God for His many blessings and ask for His continued guidance and strength.”

While his proclamation encouraged “appropriate programs, ceremonies, and activities in their houses of worship,” some groups that did not embrace the national prayer day created by Congress in 1952 opted to observe the Day of Reason.

“While we don’t begrudge individuals from choosing to celebrate the National Day of Prayer instead, when government entangles itself in such celebrations we find it to be inherently exclusionary and failing to uphold Jefferson’s Wall of Church and State Separation,” said Roy Speckhardt, executive director of the American Humanist Association.