(RNS) — Even in our present “golden age” of television, with the number of scripted programs on network, cable and streaming channels expected to top 500 this year, shows that feature religion or faith are scarce.

Rarer still are spiritually themed series that successfully find an audience, if not critical acclaim, amid the thrum of hundreds of other viewing options.

In “God Friended Me,” Brandon Micheal Hall plays an atheist who has his life turned upside down when he receives a friend request from God on social media. Photo courtesy of Jonathan Wenk/CBS Broadcasting Inc.

Then this fall, the new CBS hourlong dramedy “God Friended Me” premiered to such impressive ratings that the network gave a full-season order for it after only three episodes. Its surprise success has caused some media watchers to wonder whether we’re on the cusp of a religion renaissance on the small screen.

“It’s cyclical,” said Jeffrey Mahan, a professor of religion and communication at Iliff School of Theology in Denver and author of “Media, Religion and Culture: An Introduction.” “It’s not random. We get them in response to something.”

After 9/11 came shows such as “Survivor,” “Fear Factor” and “Lost,” which reflected the existential crises and angst experienced by many Americans, said Craig Detweiler, president of the Seattle School of Theology and Psychology and author of several books about the intersection of faith and culture, including “A Matrix of Meanings: Finding God in Pop Culture.”

“Now we have so much existential dread generated by the fear industry that is network news and is thriving in the Trump era — they’re pushing that fear button every day — that we have shows that have to wrestle with despair and ultimate questions,” Detweiler said.

The wildly popular apocalyptic visions of “The Walking Dead,” for instance, are a “perfectly rational response” to what feels like a kill-or-be-killed era, Detweiler said. “Or the visions of the afterlife that started with a show like ‘The Leftovers’ on HBO and that continue with ‘The Good Place’ or ‘Forever’ in a more accessible way. The questions are still the same: Are we living in hell? Do things get better?”

In the face of societal anxiety, Mahan believes, TV shows that depict divine or supernatural intervention are a comfort. “The genre … says God is in his heaven and all’s right with the world, God is attentive, God is jerking people back from in front of the subway train, God has a partner for you,” he said.

Whether for dramatic or comedic effect (and with varying degrees of artistry and efficacy), in troubled times, mainstream television seems to experience an uptick in programs featuring celestial or superhuman beings interacting with humankind, or mere mortals wrestling with eternal conundrums.

RELATED: CBS hopes viewers will want to watch, if not live, ‘Biblically’

Since the 2016 presidential election, for instance, shows such as “Kevin (Probably) Saves the World,” “Living Biblically” and “Lucifer” have come and gone from network television (although after Fox canceled “Lucifer” in May, Netflix has picked it up for a fourth season to air next year.)

Cable and myriad streaming channels have proffered grittier shows with spiritual themes and settings to slake an audience’s thirst for metaphysical solace or intrigue, including “The Path” on Hulu, “The Leftovers” and “The Young Pope” on HBO, “Preacher” on AMC, “Call the Midwife” on PBS and “Greenleaf” on Oprah’s OWN network.

For the last decade or two, spiritual and religious content in mainstream television programming, while certainly remaining a minority, has run the genre gamut from the serious (“Big Love,” “Joan of Arcadia,” “Saving Grace”) to the silly (“Jane the Virgin,” “John from Cincinnati,” “Impastor,” “GCB,” “The O’Neals”) and the earnest-if-twee heavenly-hosts oeuvre (“Touched…” “Highway…” “7th…”).

Most never find an audience robust enough to keep them on the air for more than a season or two. But sometimes a dark-horse show appears in the right place at the right time. 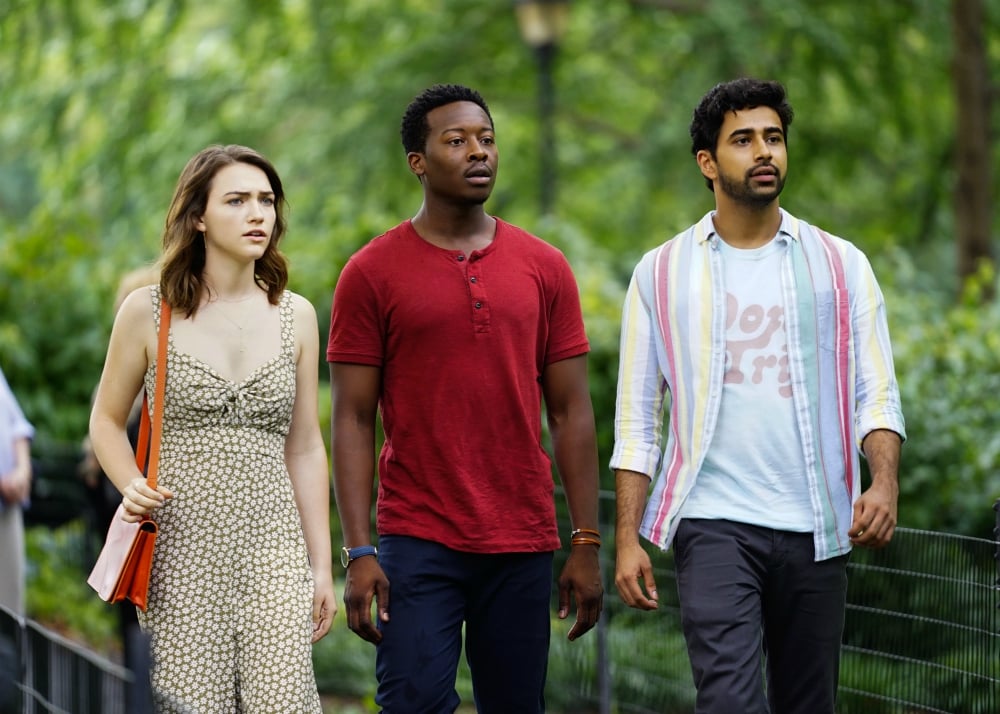 From left to right: Violett Beane as Cara Bloom, Brandon Micheal Hall as Miles Finer and Suraj Sharma as Rakesh Singh appear in an episode of “God Friended Me.” Photo courtesy of Michele Crowe/CBS Broadcasting Inc.

Over at CBS this fall, God is having a moment.

“God Friended Me” chronicles the adventures of the atheist son of an Episcopal priest who’s dispatched by a Facebook user who goes by the handle “God” to rescue perfect strangers. The supporting cast includes Jewish, Hindu and Muslim characters. Its Sept. 30 debut earned a 1.4 Nielsen rating and drew 10.4 million viewers — noteworthy, particularly given the show’s subject matter: faith, doubt and the nature of the divine (if it does, in fact, exist).

It’s an unorthodox programming mix for mainstream TV, for sure, and it’s also one of the most highly rated new dramas on television.

RELATED: Is God on Facebook? CBS hopes so, in possible new show

For more nuanced and robust exploration of those themes, Mahan said he looks to popular shows that dip into the faith arena for an episode or two, or in the secondary story arc of a larger narrative.

Think of Kathryn Hahn’s character, Rabbi Raquel Fein, and the various Pfefferman family members’ wrestling with Judaism and the nature of faith itself in Amazon Studios’ “Transparent,” or the earthy faith of Jenifer Lewis’ sassy grandmother character Ruby Johnson — “Black Jesus, Black Jesus!” — on ABC’s “Black-ish,” which dedicated a whole episode to the Johnson family’s experiences at a white hipster evangelical church.

Or the multi-seasonal storyline on “The Americans” when the teenage daughter of Russian spies living in Washington, D.C., rebels by becoming a born-again Christian and sharing the family secret with her youth pastor.

“I think we tend to get better episodic dealing with religion than we get from the shows that have a big commitment to proving that religion, particularly Christian religion, is good,” Mahan said.

RELATED: When ‘The Good Place’ gets too good for comfort

What you rarely find are series that revolve around a religious community (although “Call the Midwife,” set in part among the nurse-midwives and members of an Anglican religious order in 1960s London, is a notable exception) or with a lead character or characters who are clergypersons or for whom faith is the grounding motivation for how they live.

The million-dollar question, then, is why not?

“It just doesn’t rate — not a big enough audience,” said Julie Piepenkotter, executive vice president of research for FX Networks. “And it certainly goes against the edgier fare that seems so popular now…. Nobody sets out to make a mediocre-rated show. It’s hard enough to do with shows that aren’t hampered by treacliness that is not in vogue.”

Shows that attempt to put a relentlessly positive spin on religion or faith in general will find it nearly impossible to find purchase in the era of “Under His Eye” and the dystopian nightmares of “The Handmaid’s Tale” and “American Horror Story: Apocalypse,” she said.

Jonathan Bock, founder and CEO of Grace Hill Media, which specializes in marketing faith-based content in film and television, places part of the blame for the dearth of artful, thoughtful spiritual content on TV on the audience itself.

“For the most part right now, American Christians like the world portrayed as it should be, not as it is,” Bock said. “That’s why you have a lot of ‘Christian’ movies where a nice person becomes nicer, and it works because it’s only 90 minutes…. But on television that’s hard to sustain” without sex, violence and moral quandaries that make some Christians uncomfortable.

“What I’d like to see is progressive religiosity that thinks that faith matters, that having a ritualized or a spiritual practice is sustaining in the midst of a life where God is not in control of everything and bad stuff happens,” Mahan said. “Whether there’s any kind market for a story like that is a whole other question.”

For a spiritually themed TV show to succeed, Piepenkotter said, it would need to go deeper than superficial niceties and be controversial. Ultimately, that is up to the people who create the character and the narrative.

“You have to find the writers who want to tell those stories and have the ability to tell them well, with multilayered characters, complex characters, relationships and execution,” she said. “I want to see what’s behind that curtain. I want to see a level of hypocrisy that I see from the outside looking in.… That’s probably a really interesting show.”