“Forever,” the dramedy series that premiered last month on Amazon, is the most spiritually intriguing new TV show you should be watching this fall.

Starring SNL alums Maya Rudolph as June and Fred Armisen as her husband, Oscar, the eight-part series, which dropped in its entirety in September, does a deep dive into the meaning of life by exploring what happens when it ends.

Oscar is first to arrive in the afterlife when he skis into a tree. His beloved June joins him about a year later when she chokes on a macadamia nut during a flight to Hawaii.

For the couple, the hereafter is ambiguous — neither heaven nor hell. Rather, it seems a lot like their former life in a subdivision of tidy ranch-style homes in suburban Riverside, Calif.

“What are we supposed to be doing?” June asks Oscar soon after she arrives, lying on her back on the manicured front lawn of their (apparently) eternal home.

Is there a God? Oscar doesn’t know that, either.

But there is a shuffleboard court.

At first blush, it appears as if life just goes on on the other side of the veil in much the same way it had before, except they don’t have to work, and food simply appears in their well-appointed kitchens and pantries — including some of their favorites.

For their neighbor Mark, who died in a car crash in the 1970s when he was a teenager, leaving him to spend eternity as a perpetually moody 17-year-old, the hereafter includes an endless supply of Reggie bars. June and Oscar’s home is decorated in midcentury modern perfection with its soothing green-blue and earth-tone palette, clean lines and whimsical Bitossi pottery.

“It’s really nice — there are so many seating options,” June exclaims when she sees their living room for the first time. “Yeah, I had nothing to do with it,” Oscar says. “It was like this when I got here.”

Oscar spends his days struggling doing crossword puzzles at the dining room table. June teaches herself how to make vases and bowls on a potter’s wheel on the back patio (a nod, no doubt, to the famous Demi Moore/Patrick Swayze scene from “Ghost”). They go for strolls through the neighborhood, where the weather feels perpetually like early autumn with its amber light and just enough of a nip in the air to make you reach for your flannel shirt or lightweight cashmere pullover.

What the Danes have taught us to call hygge — a comfy, convivial atmosphere that fosters well-being.

It would appear to be a deliberate choice by “Forever” creators Alan Yang and Matt Hubbard to assemble a mise-en-scène that projects comfort. One of the first things I noticed is that June almost always wears clogs or clog-boots — so much so that I tweeted about it.

Amazon Studios responded with a tweet that said: “No matter where we are, we’re striving for comfort.”

Aha! I knew I was on to something. There’s more to this coziness than meets the eye.

Soon (a relative term when speaking of eternity), for June, familiarity and hygge morph into monotony and routine.

And the prospect of eternal boredom, well, that’s just hell.

Maybe Riverside isn’t The Good Place it appears to be, even if Oscar believes it is.

June isn’t having it.

“We do the same things every single day and I don’t see that changing literally forever,” she says. “And that bothers me.”

When Catherine Keener’s character, Kase, moves in next door in all her acerbic, misanthropic glory, she is the catalyst that stokes June’s discontent. Eventually, the two women ditch Oscar and take off for another place — Oceanside — after meeting a mysterious valise-carrying traveler (Peter Weller doing his best impression of the ferryman from the River Styx).

While the “Forever” universe appears to be nontheistic or at least agnostic, there is a kind of secular dogma that runs through it.

Think of it as a theology of comfort.

“Comfort is an easy thing to value when you have a fleeting life,” said Brett McCracken, senior editor for The Gospel Coalition and author of “Uncomfortable: The Awkward and Essential Challenge of Christian Community.” “But our ideas of satisfaction and comfort are really actually quite anemic. … Comfort, in the grand scheme of things, is a sad, little thing to emphasize.” 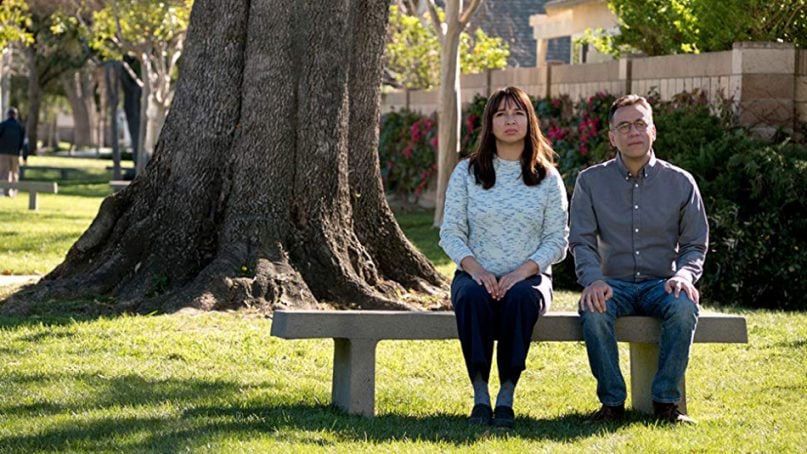 Maya Rudolph and Fred Armisen in a scene from “Forever” on Amazon. Photo by Colleen Hayes/Amazon Studios

Watching Oscar, June and Kase struggle with the afterlife’s endless mundanities reminds McCracken of something C.S. Lewis said. In “The Weight of Glory,” Lewis wrote: “We are half-hearted creatures, fooling about with drink and sex and ambition when infinite joy is offered us, like an ignorant child who wants to go on making mud pies in a slum because he cannot imagine what is meant by the offer of a holiday at the sea. We are far too easily pleased.”

It’s an image that comes to life (or at least afterlife) in “Forever,” McCracken said.

“They eventually make it to a holiday by the sea and a seaside castle, and up until that point, June is literally making mud pies with her pottery,” he said. “They’re living as half-hearted creatures, fooling around with these things that they think bring happiness, while neglecting, potentially, the availability of a more intimate, true, lasting joy.”

Ultimately, comfort for comfort’s sake, whether in this life or the next, the show seems to suggest, is at best a vapid pursuit. Humankind needs something far greater than pastimes and sugary confections (literally and metaphorically) to give life — and death — real meaning.

We need relationship. And while the familiarity that relationships bring — even with the people who bring us the most comfort — can breed contempt, they also foster intimacy.

“Intimacy is something we strive for,” said Rabbi Danya Ruttenberg, author of “Nurture the Wow: Finding Spirituality in the Frustration, Boredom, Tears, Poop, Desperation, Wonder, and Radical Amazement of Parenting.” “You can find God in going into and through your relationships. The deeper you can go into another person — that can be your doorway into everything.”

Only there are our possibilities both endless and eternal.

The first season of “Forever” ends with June and Oscar reunited in Oceanside. Despite its bottomless supply of champagne and bon temps, it turns out to be less heavenly than it did at first blush, and the couple strikes out together for an unknown Third Place, if you will.

“There was a sense of something beckoning them to keep looking and daring further. To where, I don’t know,” McCracken said. “Is there a season two?”

Because the show airs on a streaming service, there are no ratings available publicly the way they are for network shows, so it’s hard to say how the show’s doing.

Surely there is an audience for this spiritually clever, intellectually intriguing comedic fare — after all, most Americans believe in the afterlife (according to Pew Research, 72 percent say there’s a literal, physical heaven, and 58 percent believe in an actual hell) so the subject matter is evergreen.

As of this writing, Amazon has yet to announce the fate of “Forever.” But hope springs eternal.