MINYA, Egypt (RNS) — The Coptic bishop of this city south of Cairo, Anba Makarios, spent the weekend trying to comfort mourners after two buses carrying Coptic Christians were ambushed Friday (Nov. 2) as they left a monastery here, killing seven of the pilgrims and wounding 19. The Islamic State in Egypt claimed responsibility for the attack.

But during Makarios’ appearance at Prince Tadros Church, as the bishop thanked provincial officials for issuing the necessary permits to conduct public funerals, the congregation erupted in anger.

“Don’t thank them,” shouted the mourners as elderly women leaned in grief over the coffins of the victims.

“With our souls and our blood, we will protect the cross,” they chanted as young men started fist-punching the air.

The attack in the desert this weekend was the second assault at the same location by the Egyptian branch of the Islamic State. A May 2017 ambush on the road to the monastery left 28 people dead. Now, Coptic Christians say they have had enough of promises.

“Government ministers talk about our common citizenship, a concept that is impossible to see when we are constantly subjected to violence,” said Kamel Hanna, a building contractor from Sohag. Hanna had come to stand vigil at Sheikh Zayed hospital in Cairo’s suburbs, where his niece and nephew, along with 11 others injured in the attack, were being treated. “This violence is a tax we pay just for being Christians.” 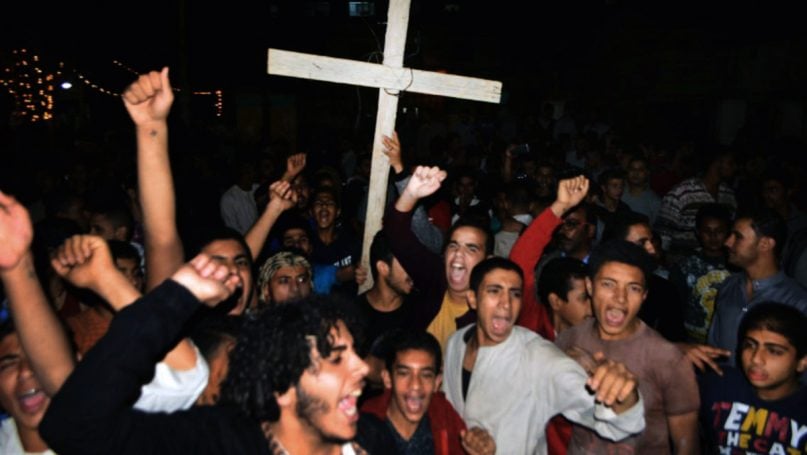 Coptic Christians chant slogans during a protest after an attack on a bus carrying Christian pilgrims on their way to a remote desert monastery, in Minya, Egypt, on Nov. 2, 2018.  (AP Photo/Mohammed Hakim)

Copts, who make up about 10 percent of Egypt’s 100 million people, have seen increasing violence against their community since 2013, when the country’s first democratically elected president, the Islamist-backed Mohammed Morsi, was deposed by the army. The months after the coup saw multiple attacks on Christian churches.

In December 2017, a gunman killed 11 people in an attack on St. Menas Church in Helwan, near Cairo. That attack came just weeks after the Coptic community had marked the anniversary of a suicide bombing that killed 29 and injured 47 at St. Peter and St. Paul’s Church, part of the large cathedral complex that includes the Cairo residence of Pope Tawadros II.

Despite the rash of violence, Pope Tawadros and the Coptic community have been seen as a pillar of support for the coup leader and current President Abdel-Fattah el-Sissi.

Fearful of Morsi’s Islamist tendencies, many Copts turned out in the popular unrest that led to his ouster. Priests in Coptic churches have since urged their congregations to turn out to vote for el-Sissi, characterizing both the leader and Egypt’s armed forces as their ultimate protector.

El-Sissi has shown favor for the Coptic churches in return. The president has allowed the construction of new churches and pushed for equal protection in employment and the exercise of religion, including a measure easing the way for Christians to make the pilgrimage to Jerusalem just as Muslims take time off to make the hajj to Mecca.

Last Christmas el-Sissi attended a dedication ceremony at the massive Nativity of Christ cathedral built in the government’s new administrative capital, a $45 billion project rising in the desert sands 28 miles east of Cairo. 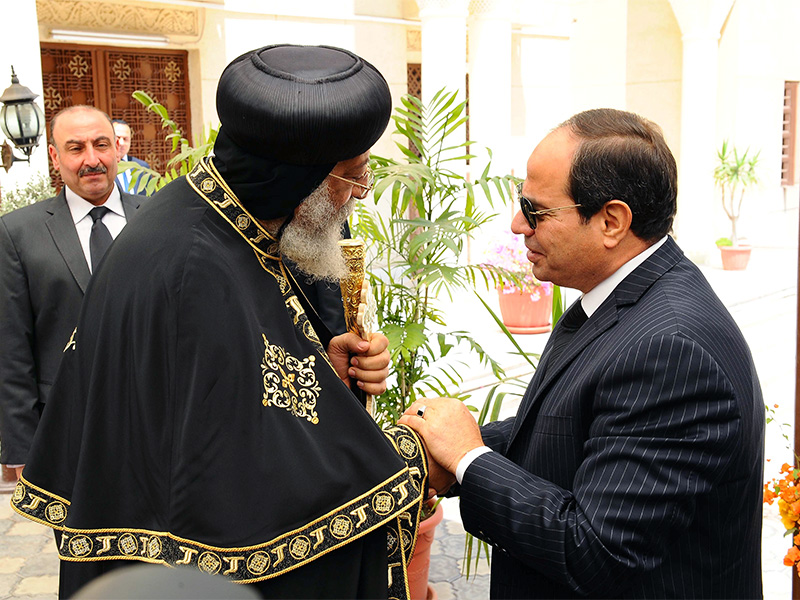 Egyptian President Abdel-Fattah el-Sissi, right, shakes hands with Pope Tawadros II, the 118th pope of the Coptic Orthodox Church of Alexandria and patriarch of the See of St. Mark Cathedral, to offer condolences for the victims of the terrorist incidents of the Palm Sunday bombings in Tanta and Alexandria, in the Abassiya Cathedral in Cairo, on April 13, 2017. Photo courtesy of The Egyptian Presidency/Handout via AP

But the regime is coming under increasing fire from the Coptic community for failing to stop Islamist terror and limiting access to the hospitals where the injured are being treated in Cairo and in Upper Egypt.

“Officials are preventing anyone from entering the hospital and reassuring the injured because the attacks show the serious flaws in their security system,” said Steven Rauf, a 20-year-old Coptic Christian medical student at Ain Shams University. He had come to see a high school friend, Youssef Nadi, who took two bullets in his head and shrapnel in his right hand, according to Rauf.

El-Sissi condemned the Minya attack Friday while attending a government-organized youth forum at the Red Sea resort city of Sharm el-Sheikh. “The martyrs who fell today at the treacherous hands of those who seek to undermine our nation’s coherent fabric and I vow our continuing determination to fight terrorism,” he said. “This incident will not undermine the will of our nation to continue its battle for survival and construction.”

On Sunday afternoon, an Interior Ministry spokesman said security forces killed 19 suspects who were tracked to a desert hideout. The ministry also released photographs of corpses it said were the bodies of the armed assailants of the pilgrims.

But the attack Friday has ended the widespread blanket endorsement of the administration’s approach even among pro-government politicians. Many Coptic youth shared social media memes contrasting the grief of the Minya families with the smiles on the faces of el-Sissi and other Egyptian leaders at the forum.

Nadia Henry, a Coptic member of parliament representing metropolitan Cairo, believes continuing terrorism shows a need not only for better police training but also development of an education system dedicated to diversity. 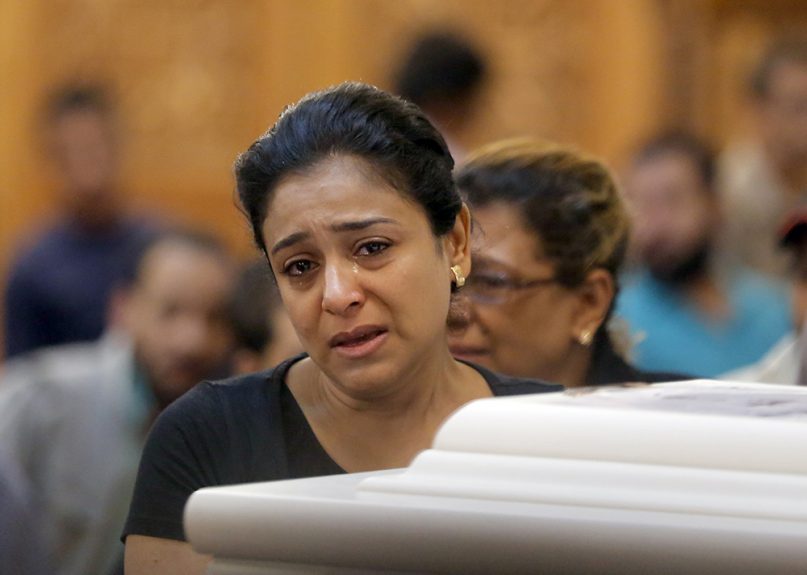 A woman grieves for killed Coptic Christians during the funeral at the Church of Great Martyr Prince Tadros, in Minya, Egypt, on Nov. 3, 2018. (AP Photo/Amr Nabil)

“We need to face [Islamist] radical thought, not just through security measures but also deploying the culture, information, education and religious departments to fundamentally change attitudes,” Henry said. “Of course, there have been security lapses, but remember, there are terrorist attacks that also strike Muslims.”

“We have no presidencies defending us, only the Lord Almighty,” said Peter Basilious, a pharmacist in the Upper Egyptian city of Al-Kosheh.

“There is disregard of the blood of the Copts that is repeated because of our peaceful piety and the church’s non-escalation policy that looks only for justice in heaven.”

Even some Coptic clergy — normally reticent to express themselves politically — are questioning whether this year’s Christmas festivities should be held at Nativity of Christ cathedral, a site closely identified with a government that has failed to deliver security.

“We are slaves to a system — it’s in a polite way. But even most of the Christian media misleads the public to appease the regime.”

Nasr said the relationship between Egyptian Christians and the government continues the discriminatory practices of medieval Islam, even as it wears a modern secular mask.

“The message continues to be that in our conscience you are dhimmi,” he said, referring to the Arabic term for non-Muslims historically subjected to special protection taxes. “But in front of the Western world we will present you as equal citizens.”

Some Copts said they understood that the government was trying. Even so, it wasn’t enough.

“I do not want to hold the state responsible because terrorism is a global phenomenon and I do not want to accuse the Ministry of Interior of negligence,” said Maged Talaat, a 38-year-old financial services manager from the heavily Coptic Shubhra district in Cairo, attending the youth forum. “But I don’t want to blame the victims.” 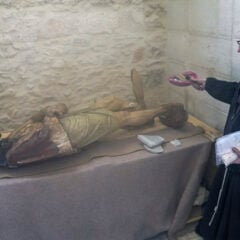 Religion Hub
Egyptian cleric revered by Muslim Brotherhood dies at 96
Follow us on Facebook!
Submit your photos to RNS