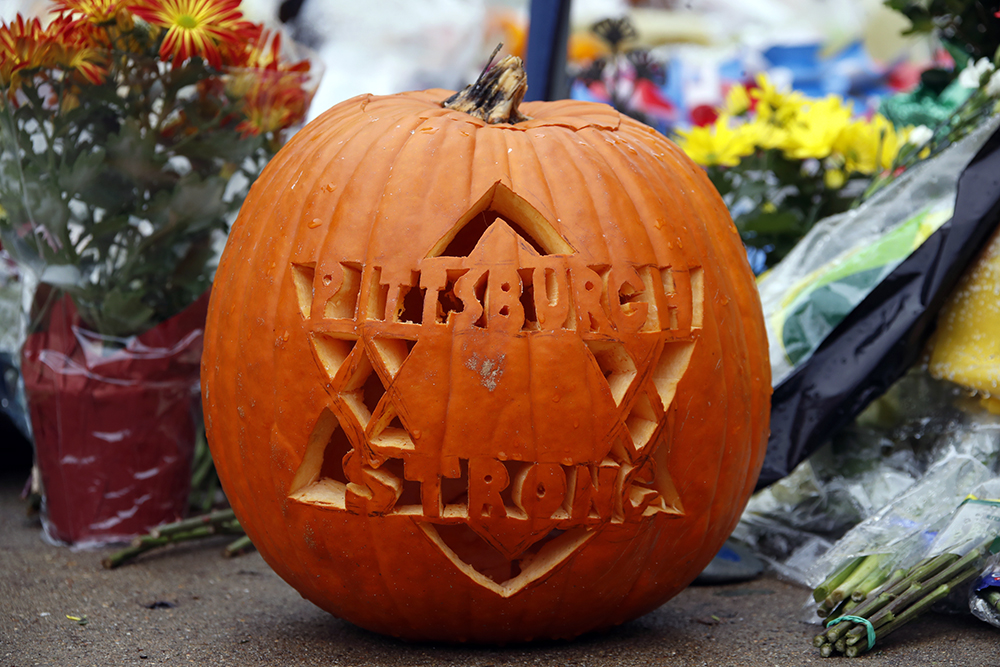 A pumpkin carved with the message ‘Pittsburgh Strong’ sits among flowers outside the Tree of Life synagogue, on Nov. 1, 2018, as part of a makeshift memorial dedicated to those killed while worshipping at the synagogue on Oct. 27 in the Squirrel Hill neighborhood of Pittsburgh. (AP Photo/Gene J. Puskar)
November 6, 2018
Jeffrey Salkin

I was at La Guardia Airport last evening, and I ran into a good friend who is a noted leader in the Conservative movement. We chatted for a while, and then this happened.

"David [not his real name], I just noticed that you are not wearing a kippah (yarmulke), as you always do."

"Yes," he said. "I don't wear it in public anymore." He then proceeded to tell me a story: while he was walking to shul several Shabbatot ago, a guy in a pickup truck pulled up next to him, rolled down the window, and screamed some anti-Jewish epithets.

"That's horrible," I said. "In fact, I have been considering going in the opposite direction. I have been thinking about wearing a kippah full time." (At present, I wear a kippah when I pray, teach, represent the Jewish community, or eat in a kosher restaurant.)

"You seem to have a streak of masochism in your personality," he said.

While I was surprised to see my friend "topless," I cannot say that I was shocked.

About fifteen years ago, during a time of increased anti-Semitic violence in France, I attended an international conference of rabbis and Roman Catholic priests in Paris.

On a free afternoon during the conference, I was wandering around the Louvre when I spotted two Orthodox colleagues looking at the Mona Lisa.

When I asked them about their bare heads, they reminded me that at times of safek sakanat nefashot, the possibility of physical harm, it is permissible to conceal -- or, at the very least, not to overtly publicize your Jewish identity.

But, then again, there was my contemplated response to Pittsburgh -- a (temporary) eagerness to wear a kippah out in public. To proclaim to the world: "I am a Jew! You don't like it? Tough!"

I am still contemplating the future fate of my head.

When I thought of my friend who chose to abandon his public kippah-wearing, I considered how the Talmud interprets the celebration of Hanukkah.

It is a mitzvah to publicize the miracle (according to the Talmud, of the oil that lasted eight nights) by displaying your hanukiyah (Hanukkah menorah) in a window, so that passersby can see it.

But, the text hastily continues, in a time of persecution it is permissible to simply place the hanukiyah on the table, away from public viewing.

Is this, then, a time of persecution? Is it time to remove our kippot, keep our hanukiyot on the kitchen table, and stop talking about Seinfeld in public?

We are not living in 1938. (Some of you, right about now, are comparing my alleged naivete to that of many German Jews, who thought that things would get better. Until they didn't get better.)

1. The restrictions against Jews, and the violence against Jews, was entirely the work of the Nazi government. It was completely and totally top down.

Yes, President Trump is clueless, and tone deaf, and willing to ignore, downplay, and relativize the machinations of the supremacist right.

Yes, President Trump's rhetoric has chipped away at the immune system that once kept such manifestations of hatred in check.

But, but, but: these are not government-sponsored acts of violence. They are coming from the rabble.

2. The Jews have allies.

One of my favorite jokes. Two Jews are walking, late at night, in a bad neighborhood. Suddenly, they hear footsteps behind them. One Jew turns to the other and says: "We had better be careful. There are two of them, and we are alone."

Actually, we are not alone -- and the actions and reactions of our many friends over the past week has demonstrated that. Every rabbi has stories about how ministers, priests, lay people, imams, the entire Muslim community, have reached out to them, have joined the Jewish community at vigils and at services.

So, yes: this has been the most difficult week in American Jewish history.

It has also been, in some ways, the grandest.

In true Dickens "best of times, worst of times" fashion, we learned that it is the best of times: we are loved.

It is also the worst of times: we are hated.

3. Judaism is its own reason for being.

About my flirtation with full time kippah-wearing. I came to realize that I would be doing it as a fist to shake in the face of the Jew-haters.

But, Pittsburgh and anti-semitism cannot be the way that we define Judaism to ourselves, and especially, to our young people. Judaism has to have its own intrinsic reason for being important, real, and holy within the life of the individual and the life of the community.

I believe this: the attack on Tree of Life Synagogue was an attack on all that we Jews hold as holy.

Affirm the holy in our lives. Holy places, like the synagogue and the home. Holy times, like Shabbat and the festivals. Holy ways of eating, giving, and speaking.

It is not because "they" hate us.

It is because of three little words that most Jews have never heard their rabbis say.