WASHINGTON (RNS) — Former President George H.W. Bush was recalled as a man of “quiet faith” during a state funeral at Washington National Cathedral, a fitting site to memorialize the longtime Episcopalian.

“With faith in Jesus Christ, we receive the body of our brother George for burial,” intoned Episcopal Church Presiding Bishop Michael Curry at the start of the Wednesday (Dec. 5) ceremony as the 41st president’s casket was carried by military members into the cathedral.

All of the living former and current presidents — Jimmy Carter, Bill Clinton, Barack Obama and Donald Trump — joined the 3,000 dignitaries, family and friends at the invitation-only ceremony.

The senior Bush’s eldest child, former President George W. Bush, gave an emotional tribute to his father, highlighting his service to country and his focus on giving back to others. 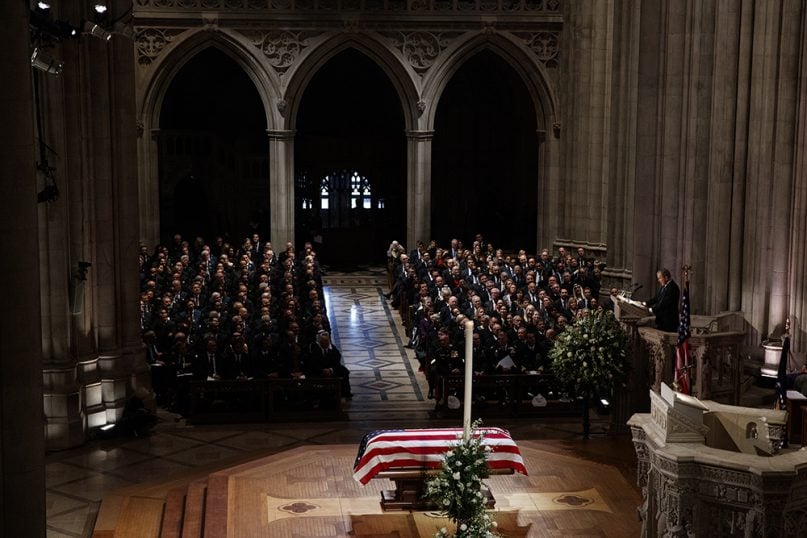 “Dad taught us that public service is noble and necessary, that one can serve with integrity and hold true to the important values like faith and family,” the 43rd president said. “To us, his was the brightest of a thousand points of light.”

Other family members took turns reading Scripture, including Jenna Bush Hager — daughter of the 43rd president — who touched her grandfather’s flag-draped casket before she read from Revelation 21, whose first verse begins: “Then I saw a new heaven and a new earth.”

The Rev. Russell Levenson Jr., rector of St. Martin’s Episcopal Church in Houston, said the elder Bush made Levenson’s job as his pastor for almost a dozen years an easy one because of the late president’s concern more for others than for himself.

“Jesus Christ, for George Bush, was at the heart of his faith, but his was a deep faith, a generous faith, a simple faith in the best sense of the word,” said Levenson in his homily. “He knew and lived Jesus’ two greatest commandments: to love God and to love your neighbor.” 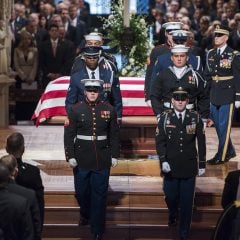 The pastor recalled moments of friendship and faith as the former president’s life ended on Friday, from longtime aide James Baker massaging Bush’s feet to family and friends kneeling around his bed.

In another tribute, presidential historian Jon Meacham noted that Bush frequently wondered why God had spared him when his other Navy comrades were lost after their plane was attacked during World War II.

“The workings of Providence are mysterious but this much is clear: The George Herbert Walker Bush who survived that fiery fall into the Pacific three-quarters of a century ago made our lives and the lives of nations freer, better, warmer and nobler,” said Meacham, a biographer of George H.W. Bush.

George W. Bush recalled how his father dealt with another tragedy, the loss of daughter Robin at age 3 to leukemia, which occurred early enough in George W.’s and brother Jeb’s lives that they did not understand the extent of their parents’ agony.

“We only learned later that Dad, a man of quiet faith, prayed for her daily,” said his son. “He was sustained by the love of the Almighty and the real and enduring love of her mom. Dad always believed that one day he would hug his precious Robin again.” 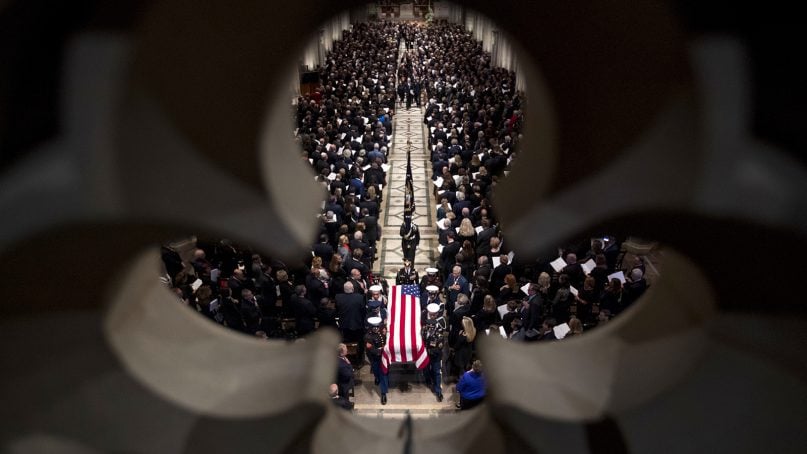 The flag-draped casket of former President George H.W. Bush is carried out by a military honor guard during a state funeral at Washington National Cathedral on Dec. 5, 2018, in Washington. (AP Photo/Andrew Harnik, Pool)

Beyond his many roles as a public servant — from congressman to CIA director to vice president — the elder Bush’s personal history was steeped in religion. The great-grandson of an Episcopal rector had been led as a child in morning family worship that included the Episcopal Book of Common Prayer. That same book’s funeral rite was followed for his service Wednesday.

During his time in the White House, he attended St. John’s Episcopal Church across Lafayette Square, as well as the cathedral and a chapel at the presidential retreat Camp David whose dedication he attended in 1991.

His funeral, held on a National Day of Mourning designated by Trump, honored a man known to be generally reticent — and often uncomfortable — about discussing the details of his personal beliefs.

He nonetheless had much God-talk in his presidential remarks.

Historian Gary Scott Smith, author of “Religion in the Oval Office: The Religious Lives of American Presidents,” noted that Bush stated that the U.S. was “one nation under God” 53 times in his one four-year term in public statements and addresses, far more than Clinton, Reagan and his son, each of whom had eight years in the White House. The 41st president made references to prayer in 220 speeches, remarks and proclamations, Smith added.

George H.W. Bush’s first act as president was to utter a prayer during his inaugural address. It began: “Heavenly Father, we bow our heads and thank You for Your love.” His Cabinet meetings started with prayer, either silent or led by key staffers, Smith wrote.

In a speech to the annual convention of the National Religious Broadcasters in 1990, Bush said: “For although I’ve been President for barely a year, I believe with all my heart that one cannot be America’s President without a belief in God, without the strength that your faith gives to you.” 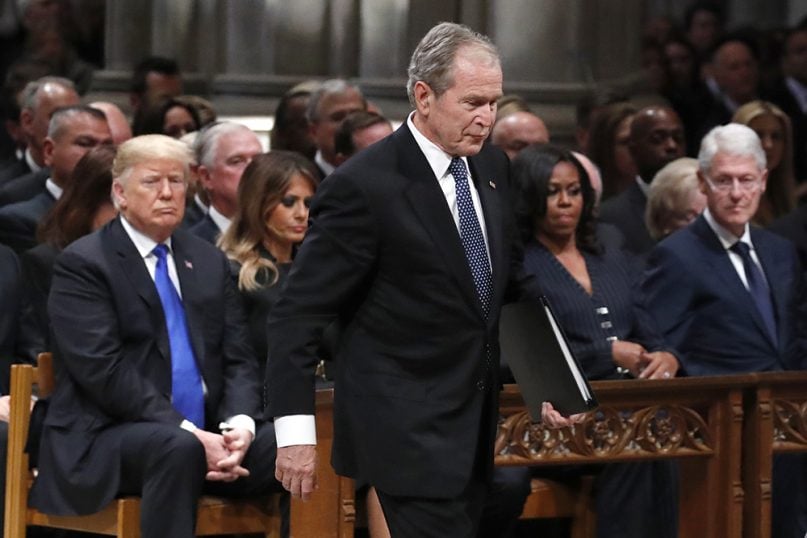 Though he had friends among evangelicals — most notably evangelist Billy Graham — Bush also angered some of them for not hiring more conservative Christian staffers.

As the commendation prayer concluded the service, those gathered under the cathedral arches said: “Give rest, O Christ, to your servant with your saints, where sorrow and pain are no more, neither sighing, but life everlasting.”