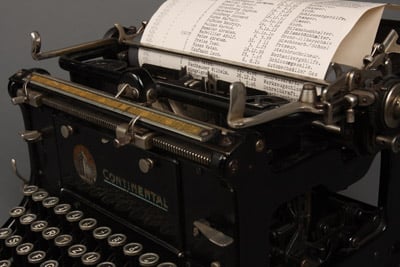 (RNS2-NOV08) A typewriters used in Steven Spielberg's film, "Schindler's List," in among the artifacts on display at the new National Museum of American Jewish History in Philadelphia. The typewriter still holds the ?Oskar Schindler list? used in the film. For use with RNS-JEWISH-MUSEUM, transmitted Nov. 8, 2010. RNS photo courtesy NMAJH.
December 11, 2018
Jeffrey Salkin

This week marks the twenty-fifth anniversary of the release of Stephen Spielberg's film, "Schindler's List."

Let there be no question: it is one of the most significant films of the past half-century. For Jews, it has assumed almost canonical status. Jews went to see it, as if going to services on the High Holy Days.

We felt so pious about it, that even Jerry Seinfeld needed to make his own snarky comment on it. Recall the famous episode in which the intolerable mailman, Newman, spies Jerry and his observant girlfriend, Rachel, making out during the movie.

While some Jews and others continue to find that scene offensive, what was Jerry actually saying? He was shooting a double-pronged satirical arrow.

First, the idea that men and women would make out in movies on a date -- standard operating procedure.

But, second: that they would do it during "Schindler's List."

Have they neither decency or shame? This is like, well, making out during the yizkor service on Yom Kippur -- and that is precisely how Jerry's parents, and Rachel's father, interpret it, as well.

Translation: to behave in a sexual way during "Schindler's List" is a desecration of, the holy.

"Schindler's List" has achieved iconic status among American Jews -- in a way that few cultural events can ever really do.

But, what was the deeper lesson in it -- a lesson that goes far beyond the Shoah, and even of the righteous gentiles who saved Jewish lives, of which Oskar Schindler is an example?

Whenever I go to Jerusalem, I try to make a pilgrimage to the grave of Oskar Schindler.

Schindler is buried in a Catholic cemetery outside the Old City of Jerusalem. For years his grave was simply one among many. Today, it is a sacred tourist destination -- as is his factory in Krakow, as well as the site of Plaszow, the work camp.

You cannot miss the grave. It is almost entirely covered with stones that well-wishers have left.

Whenever I stand at that grave, I remind myself: the most powerful thing about Oskar Schindler was not his heroism.

The most powerful thing about Oskar Schindler was, paradoxically, how unheroic he was.

Oskar Schindler was an unpleasant person. He was a filanderer and a drinker.He was chronically unsuccessful in business.

The greatest thing that happened to him was that he saved his Jews. After that, his life turned to dust. His Jews ultimately brought him to Israel. They saved his life as he had saved theirs. He gave them their lives -- and they gave him meaning.

That is precisely why he could do what he did. It was not in spite of the profane pieces of himself, but precisely because of them.

They taught that without the yetzer ha-ra, the not-so-good inclination, the evil inclination, the unholy impulse, the animalistic part of us (OK -- the part of you that is a total jerk, or worse), the world could not exist.

"Without the evil inclination, no one would father a child, build a house, or make a career," says the Talmud. You need that part of yourself.

The evil inclination is not only the urge to do evil. It is also libido, and ego, and the striving for power.

Early Christianity waged an all out war against that impulse. Monks and mystics tried to liberate themselves from it.

Modern secularism wages a war in favor of that impulse. In the watchwords of the faith, according to the ancient Book of Nike: Just do it.

Judaism understands that the aggressive, active, ambitious part of the human psyche is essential to maintaining and propagating the world. Everything within us is worth something. To know that is the work of the soul.

Even the unholy impulse within us is good for something.

Oskar Schindler wasn't saintly. It is probably the case that very few of the righteous of the nations who saved Jewish lives were saintly. Some of that must have had ulterior motives. (Some, in fact, were anti-semitic, but believed that they had a human responsibility to save Jewish lives.)

For me, the holiest moment in "Schindler's List" is that moment when he is watching the liberation of the ghetto in Krakow. He is on horseback on a hill. He sees a young girl in a red coat -- that famous moment in the movie that is the only one shot in color.

The look on his face, as played by Liam Neeson, was worthy of an Academy Award all on its own. It was the look of a man who understood the horror that was before him, and decided that he would rise above it.

The saintly thing about Oskar Schindler was that he could use all the pieces of himself -- even the seemingly unworthy and unsavory pieces.

Watch "Schindler's List" again. You will see what I mean.

And, ask yourself: how can I use the dark, not-so-good pieces within myself, as well?