BETHLEHEM, West Bank (AP) — Pilgrims from around the world flocked to Bethlehem on Monday for what was believed to be the biblical West Bank city’s largest Christmas celebrations in years.

Hundreds of locals and foreign visitors milled in Manger Square as bagpipe-playing Palestinian Scouts paraded past a giant Christmas tree. Crowds flooded the Church of the Nativity, venerated as the traditional site of Jesus’s birth, and waited to descend into the ancient grotto.

Palestinian Tourism Minister Rula Maaya said all Bethlehem hotels were fully booked, and the city was preparing to host an “astounding” 10,000 tourists overnight.

“We haven’t seen numbers like this in years,” she said, adding that the 3 million visitors to Bethlehem this year exceeded last year’s count by hundreds of thousands. 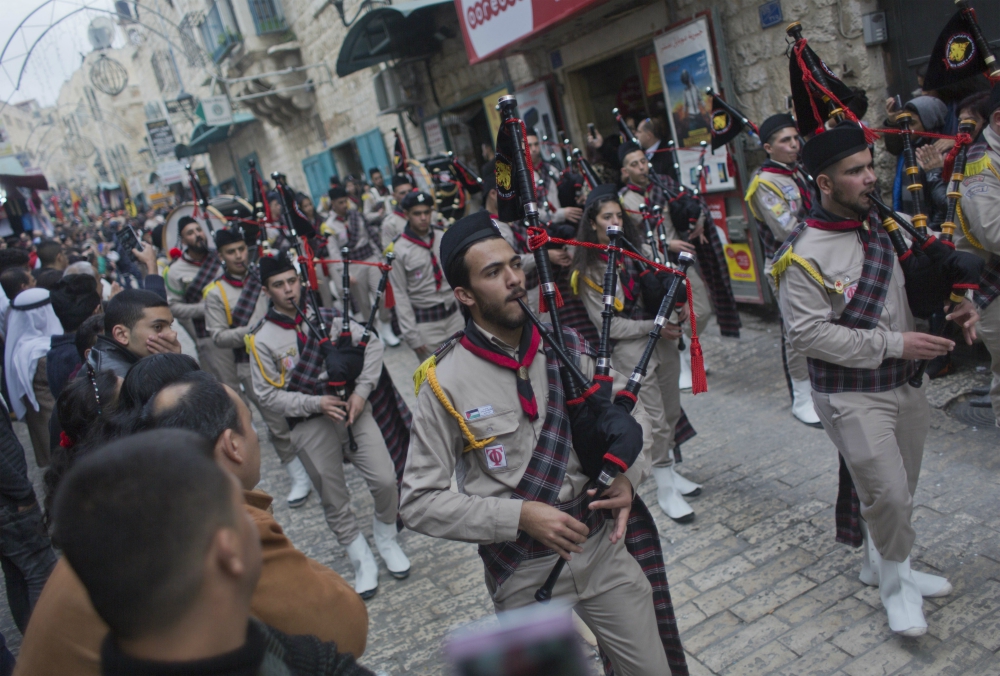 Solemn-faced nuns and enthused tourists crossed themselves and bowed over their rosaries as they entered the church, the air thick with incense.

Linda Selbmann, 24, of Chemnitz, Germany, said she had long dreamed of celebrating Christmas in Bethlehem.

“It’s wild to be in the place it all began,” she said, sipping Turkish coffee in front of a statue of the Virgin Mary cradling the infant Jesus. 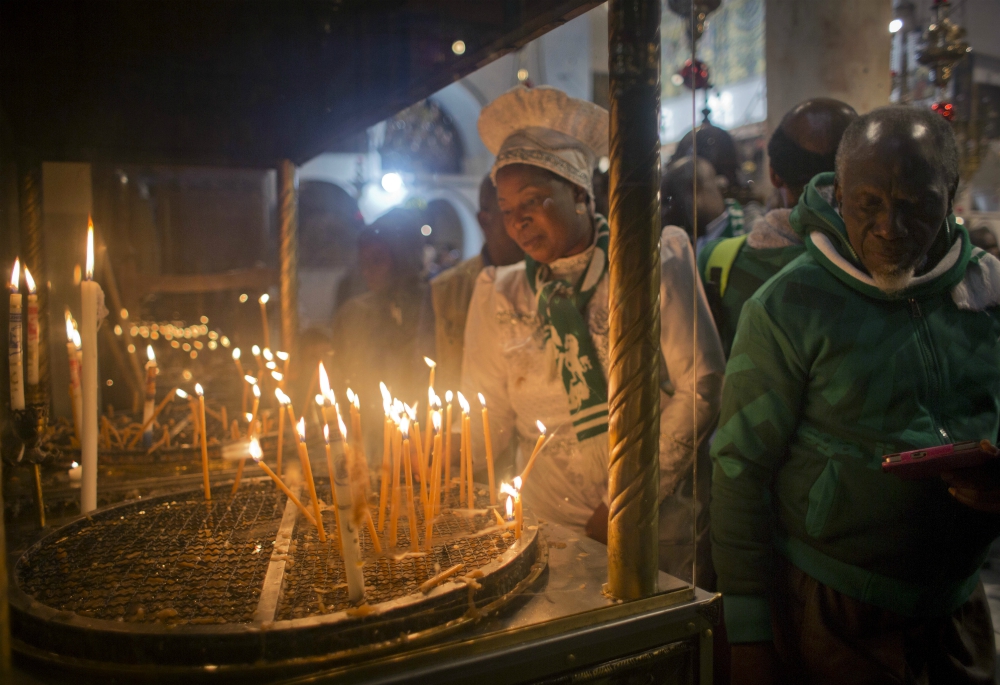 Christian worshippers light candles at the Church of the Nativity, traditionally recognized by Christians to be the birthplace of Jesus Christ, in the West Bank city of Bethlehem, Sunday, Dec. 23, 2018. Christians around the world will celebrate Christmas tomorrow. (AP Photo/Nasser Nasser)

The Christmas festivities traditionally bring a boost of holiday cheer to Christians in the Holy Land, whose numbers have shrunk over the decades relative to the general population and now make up just a minority.

As the sun set on Manger Square, the enormous Christmas tree lit up and the city’s ancient passageways shone with colored string lights and flashing crosses. Choirs sang classic carols and hymns, their voices echoing throughout the plaza. 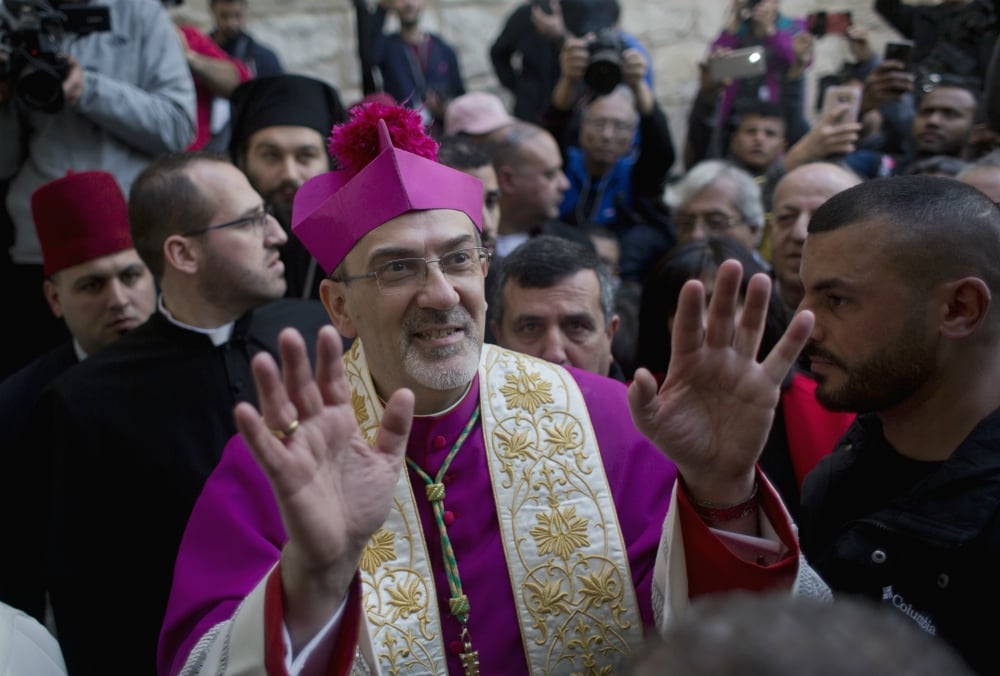 Christians celebrate the arrival of Archbishop Pierbattista Pizzaballa, the top Roman Catholic cleric in the Holy Land, after he crossed an Israeli military checkpoint from Jerusalem ahead of midnight Mass at the Church of the Nativity, traditionally recognized by Christians to be the birthplace of Jesus Christ, in the West Bank city of Bethlehem, Monday, Dec. 24, 2018. Palestinians are preparing to host pilgrims from around the world in celebrating Christmas in the West Bank city of Bethlehem. (AP Photo/Nasser Nasser)

At a midnight Mass at the Church of the Nativity, Pizzaballa addressed a packed house of worshippers and dignitaries that included Palestinian President Mahmoud Abbas and Prime Minister Rami Hamdallah.

Pizzaballa said the recent restoration of the church was a metaphor for recent events in the region.

“The mosaics were splendid, but covered by a layer of dirt,” he said at the start of his homily.

“This last year was terrible,” said Pizzaballa, referring to the upsurge in violence between Israelis and Palestinians, “so we all tend to think that all is dirty. But if you remove this layer of dirt we see how wonderful the mosaics are.”

“Since it’s Christmas, we have to be positive,” the archbishop said.

Palestinian security personnel and vehicles stationed around the square reminded visitors that amid the merriment, they couldn’t quite escape the city’s political reality. Bethlehem is located in the Palestinian-controlled area of the West Bank, and much of the city lies behind Israel’s separation barrier.

“Last year things were worse because the injustice was so obvious,” said Maaya, the tourism minister, referring to U.S. President Donald Trump’s decision to recognize Jerusalem as the capital of Israel, incensing the Palestinians and igniting clashes. “But this year doesn’t feel so different. We are still occupied, and we always have problems,” she said.

Monjed Jadou, a Bethlehem resident, said that although he noticed an impressive number of foreigners in the square, the crowds of Palestinian visitors appeared thinner than usual.

“Security is tighter around here than it’s been in a while, and the streets feel less safe. I think people are afraid,” he said, adding that his friends from the West Bank city of Ramallah decided not to come because the Israeli army had been blocking roads around the city.

The West Bank has seen a spike in violence in recent weeks, set off by a pair of deadly shootings targeting Israeli soldiers and settlers claimed by the Islamic militant group Hamas. Israel has ratcheted up security at checkpoints as it presses on with its manhunt for suspected Palestinian assailants.

Other visitors seemed unconcerned by recent violence in the area.

“This has been No. 1 on my bucket list,” said Yohannes Denu, 42, of Los Angeles. “There’s no better place to be as a Christian, it takes me back to all the rich stories I heard growing up. To be at the center of my faith, it’s joyous, it’s unbelievable.”

In anticipation of the midnight Mass at the Church of the Nativity, the climax of Christmas Eve celebrations, Palestinians and pilgrims huddled in groups, some singing “Silent Night” and carrying candles.

“This is a day of celebration,” Maaya said. “And we have hope that one day we’ll be able to celebrate like everyone else.”