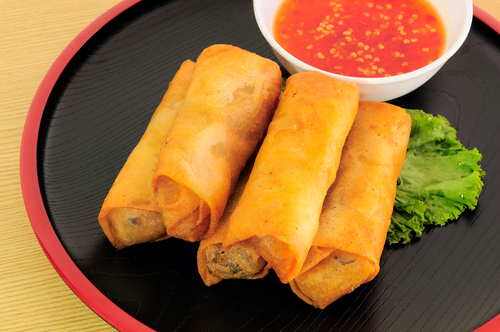 "...on this night, we dip twice." That's the line from the Passover Haggadah.

Except, not on the night before Christmas.

If you are Jewish, you are most likely dipping far more than twice. You are probably dipping four or five times.

Fried noodles in the duck sauce.

This evening, I will be participating in the ancient Jewish custom of eating Chinese food at a restaurant with beloved congregants. No doubt, we will run into other members of the tribe there. We could probably act out Fiddler On The Roof from memory.

But, why? Why did eating Chinese food on Christmas (and in many places, going to the movies as well) become a Jewish "thing?"

There are any number of theories as to how this minhag (custom) developed. Let me sum up two for you -- and throw in a third.

The urban geography argument: If you consider the history of Jewish and Chinese settlement in the United States (and other places, too) you will discover that Jews and Chinese people have often lived in close proximity. Consider the major example: New York City's Chinatown and the Lower East Side.

It is also true that Asians often move into formerly-Jewish areas and/or areas that are undergoing ethnic transition. Therefore, that brings Jews and Chinese (and Italians, and others) living cheek to jowl, with a certain amount of culinary exchange.

The hidden treif argument: Anyone who knows anything about Judaism and Jewish culinary culture knows about the biblical taboo on eating pig.

Shellfish -- less so. (As one modern sage put it: Lobster is treif, but pork is anti-semitic).

Both of those forbidden food groups are staples of the Chinese menu (with a hearty shout out to kosher Chinese restaurants).

With the exception of pork ribs, Chinese food offers the Jewish diner the ability to eat treif, but not to have it stare you in the punim. The shrimp and pork is concealed inside egg rolls. It's there, but it's not there.

(I had at least two childhood friends whose parents maintained three sets of dishes: milk, meat, and Chinese).

Those arguments for the Jewish relationship with Chinese food are quite common.

But, they would hold true for the Jewish-Chinese food romance on any given day of the year.

Why, then, on erev Christmas? ("Why is this night different from all other nights?"

The cultural stranger argument: I figured this one out several decades ago.

'Twas the night before Christmas, on 81st Street,

When Jeff and his friends had nowhere to eat.

The burger joint closed, and the pizza place, too

So we sat and we wondered: now what do we do?

Said a friend with bravado: "I have an idea

We will find a Chinese place that is open,

There will be food there." That's what we were hopin'.

And so, down the street, out into the chill,

We found one place open; it would fit the bill.

We ate with the owner, his wife, and his kids.

And then he asked shyly: "I assume you are Yids."

We admitted the truth; there was no need to lie.

But, then I was curious. And so, I asked why.

He said with a smile: "It seems to be true

That the only non-Christians are the Chinese and you.

Of course, there are Muslims, and Hindus, and Jain,

But see, they have nothing that compares to lo mein.

When everyone else is looking at mangers,

The Jews and the Chinese are cultural strangers.

It's great to be different at this holy season.

That is why you are here. It's a very good reason!"

We went on to order. The food, it was great.

We stayed until seven, and then it was eight.

We said we'd be going, but we would return.

For Jews, it seems, have something to learn.

We are not the only ones who stand out.

To live with our differentness; that is what it's about.

Whatever you choose to do this evening, may the warmth of this season embrace you!