(RNS) — As 2019 begins, the world is becoming more religious, not less. Faith from diverse traditions grows as population expands throughout most of the Global South. Last year, nearly 50 million more Christians were added in Africa, making it the continent with the most adherents to Christianity in the world, 631 million.

In the U.S., a narrative of religious decline and growing secularism is now culturally popular. The percentage of “nones” — those claiming no religious affiliation — is growing, particularly among millennials. But what are the deeper trends and challenges, beneath the headlines, that are likely to shape the future of faith?

Where there is growth in American Christian denominations, it is driven mostly by nonwhites, whether Catholic or Protestant, evangelical or mainline. Over the past half-century, 71 percent of growth in Catholicism, for instance, has come from its Hispanic community. In the Assemblies of God, one of the few U.S. denominations to show overall growth, white membership slightly declined while nonwhite membership increased by 43 percent over 10 years.

Multiracial congregations are also expanding to draw 1 in 5 churchgoing Americans, and surveys report a higher level of spiritual vitality among them compared with racially homogeneous congregations.

Globally, thanks to dramatic geographic and demographic changes, Christianity is recentering its footprint and becoming a non-Western religion. For 400 years, the faith has been molded by the largely European culture that came out of the Enlightenment. But today its vitality is coming from emerging expressions of Christianity in Africa as well as in Asia and Latin America.

These new influences are raising new questions about the relationship of the individual to the community, rational versus nonrational pathways to perceiving truth and the interplay of the spiritual and material realms.

As the yearning for authentic spiritual experience moves from the head to the heart in this new environment, spirit-filled communities are flourishing. Today, 1 of 4 Christians in the world identifies as Pentecostal or charismatic, with Pentecostalism growing at roughly four times the rate of the world’s population itself.

The popular image of Pentecostals as television preachers extolling a prosperity gospel and flitting around on private jets obscures the real causes for much of the movement’s explosive growth: small Pentecostal communities among the marginalized in the Global South that are providing empowerment and social transformation.

In wealthy Western countries, a strong spiritual driver is the visible impact of climate change. After centuries of a Western Christian cosmology that empties the material world of spiritual value, care of creation is becoming a foundation of Christian faith and practice, as Pope Francis proclaimed in his prophetic encyclical “Laudato Si’.” Saving the Earth has become a spiritual calling.

But the West, particularly the U.S., has to open its eyes to startling developments in the rest of the world. 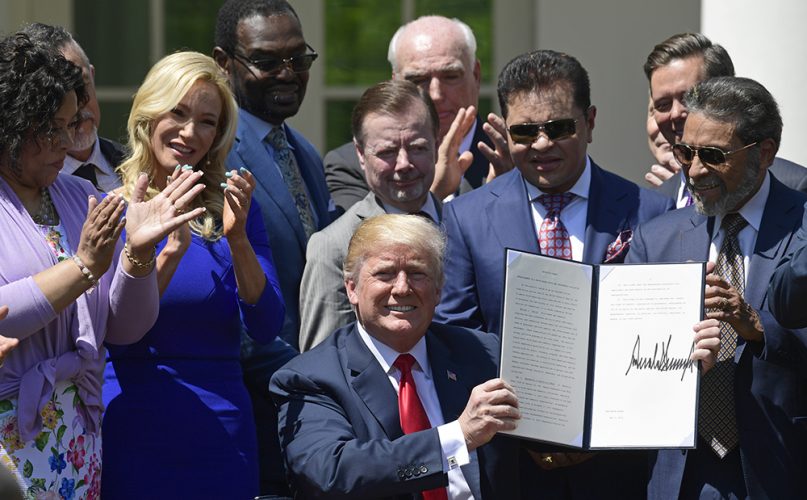 President Trump, surrounded by many evangelical leaders, holds up an executive order that he signed during a National Day of Prayer event in the Rose Garden of the White House in Washington on May 3, 2018. (AP Photo/Susan Walsh)

The “Trump Effect” has undermined the integrity of Christian witness in America in the eyes of the global church. Most non-American church leaders can’t believe the public support given to President Trump by some conservative U.S. church leaders and cannot understand the deafening silence of others.

Trump’s own statements have scandalized the non-Western church, in referring to African nations as “s—hole countries” and in proclaiming an “America first” policy that sounds in many places like a theological heresy that puts the Bible second.

American Christianity across all traditions faces the imperative of de-Americanizing its witness if it is to have any global integrity.

The world won’t give any credibility to versions of the gospel that baptize American power, wealth and global reach with notions of spiritual blessing, especially under the leadership of Trump.

It is also essential to confront culture wars in the church at home and abroad. The division in the church over ethical understandings of sexuality will persist for decades, since no action of a denominational general conference, synod, assembly or council will change the sexual orientation of its members. While the church in the Global South mostly holds to strong conservative views on this matter, diversity also exists there and will slowly grow.

The key question ahead is whether the core of the gospel is declared to be at stake in these differences over same-gender covenanted partnerships, and divide us, or whether they will be seen as ethical and pastoral challenges that should not undercut the unifying call to follow Christ’s mission in the world.

Meanwhile, “belonging before believing” is reshaping pathways of discipleship. The thirst for authentic community, evident in the appeal of Taize to young people and countless other small initiatives, demonstrates a need to rethink how we welcome others into our faith or tradition. The demand that outsiders first adhere to specific beliefs expressed in creeds or confessions is giving way to inviting them first to explore and share in worship, reflection and service. Eventually this will alter traditional ecclesiology and understandings of discipleship.

If there is a theme in what lies ahead for the church as we enter a new year, it is that the white Western Christian bubble that has powerfully shaped Christianity for the past four centuries is now beginning to burst. Future expressions of Christian faith will be shaped by its interactions with non-Western and nonwhite cultures. This will present challenges to the established church in the U.S. but may hold the keys to its revitalization.

(Wesley Granberg-Michaelson, whose latest book is “Future Faith:Ten Challenges Reshaping Christianity in the 21st Century,” served for 17 years as general secretary of the Reformed Church in America.)