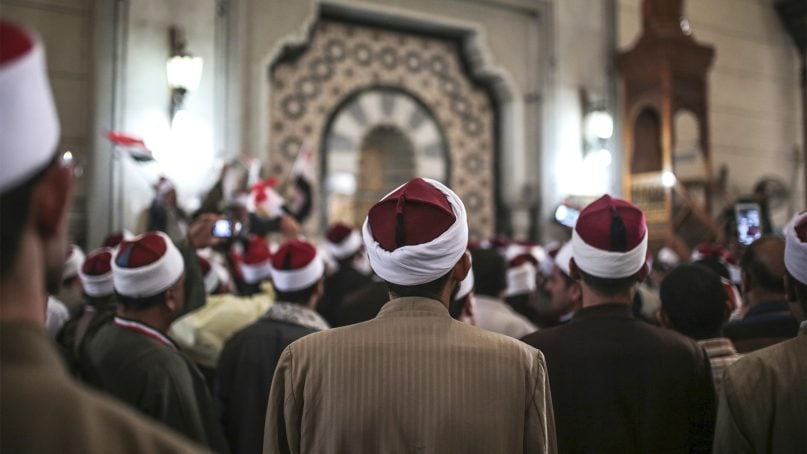 Egyptian clerics from Al-Azhar institution rally at a mosque in central Cairo on Feb. 3, 2015. Egypt’s top Islamic authority has rejected the president’s suggestion for legislation that would invalidate the practice of men verbally divorcing their wives. Al-Azhar’s Council of Grand Clerics says verbal divorce, when appropriately declared by husbands with sound minds, has been an undisputed practice since the days of the seventh-century Prophet Muhammad. (AP Photo/Mosa’ab Elshamy)

CAIRO (RNS) – Egypt’s skyrocketing divorce rate has spurred a debate among Muslim religious leaders and government officials about how best to keep families together.

Twenty percent of Egyptians are divorced, according to the government’s Central Agency for Public Mobilization and Statistics, an astounding figure given that 40 percent of the country is younger than 18.

Another factor, the government says, is how easy it is to divorce. Under Shariah, or Islamic law, a husband may terminate a marriage simply by uttering the words “I divorce you” three times.

“I believe it is necessary to protect the nation from the effects of children living separately from their parents,” said el-Sissi in a July 28 speech at Cairo University. Theologians at Al-Azhar University, a prestigious Muslim religious institution founded in the 10th century, answered the president with a definitive no.

“Rising divorce rates will not be countered by ending verbal divorce,” wrote Ahmed al-Tayeb, an imam and former president at the university, in a statement signed by 22 other senior clerics. “Verbal divorce complies with Sharia, but we will join the government in proposing solutions to address broader social issues.”

The scholars added that improving education, countering drug use and putting mass media to work to provide moral guidance are better ways to counter divorce. Religious figures often link drugs and divorce as signs of a deeper moral decay in Egypt.

Last January, Minister of Social Solidarity Ghada Wali said the rate of drug addiction in Egypt is twice global levels, with 10 percent of the population, or 9.6 million people, using narcotic substances such as tramadol and heroin.

The clerics don’t discount the need to combat divorce, according to Kamal Boraiqa, a professor of Islamic studies at Al-Azhar. “Muslim scholars in Egypt are worried about divorce because it is the last solution for disagreements in marital relations and it only should happen within a narrow scope of circumstances,” Boraiqa said. 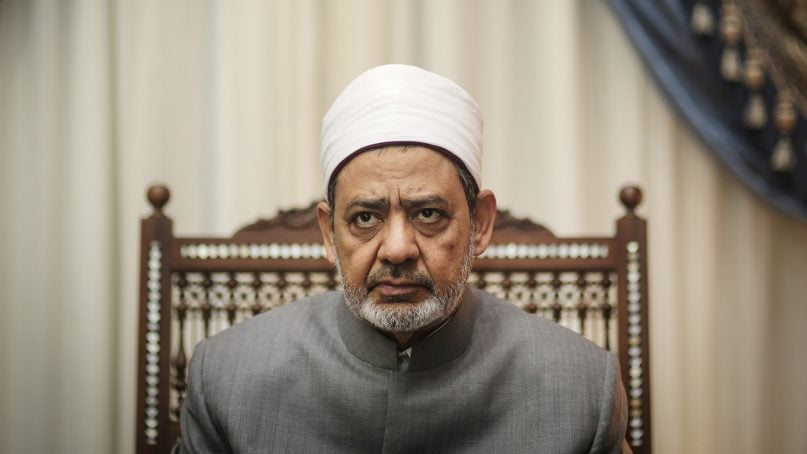 Ahmad al-Tayeb, grand imam of Al-Azhar, poses for a photograph in his office in Cairo on June 4, 2015. Egypt’s top Islamic authority has rejected President Abdel-Fattah el-Sissi’s suggestion for legislation that would invalidate the practice of men verbally divorcing their wives. (AP Photo/Mosa’ab Elshamy)

But the government is concerned about more than the effect on marriage. The high divorce rate is a threat, the administration believes, to el-Sissi’s attempts to stem poverty and improve the lives of Egyptians. “The result is more children are exposed to violence and neglect. That, in turn, leads to an increase in the school dropout rate,” said Shawky.

Responding to the government’s challenge to verbal divorce, Al-Azhar began an outreach program this past spring for estranged couples that includes sheikhs and religious counselors staffing a “reunification unit” that Boraiqa said has worked on almost 1,200 mediations and repaired more than 800 marriages since its inception in April.

“Scholars and imams are in close contact with the people and have in important role to help decrease the number of divorce cases,” said Boraiqa. The reunification unit “tries to help people who are in real need for someone trustworthy to speak from Islamic point of view,” he added.

Couples contact the reconciliation unit through a telephone hotline and SMS services such as Facebook messenger and WhatsApp. Through an Android app available through Google Play, Al-Azhar also connects distressed couples to Islamic scholars who provide marriage counseling. 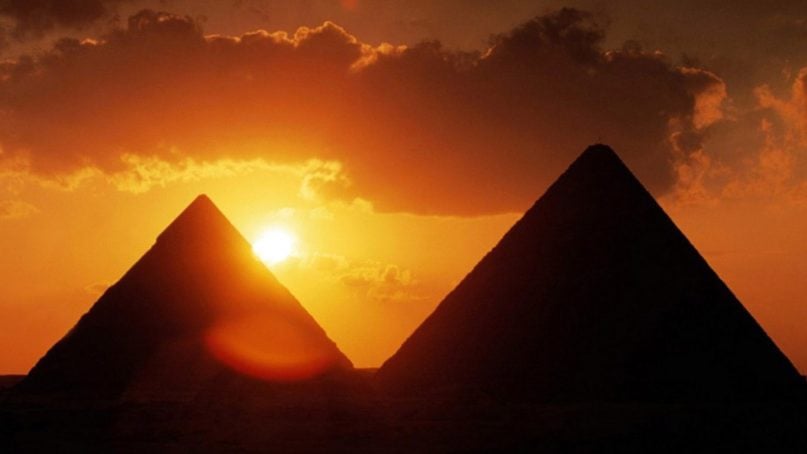 The sun sets between two pyramids in Egypt. Photo courtesy of Creative Commons

“My husband says he wants a divorce because I took money from him without seeking his permission,” a 36-year-old mother of four said in a recent call to the reconciliation unit’s high-tech Cairo center. (The call was shared with Religion News Service on the condition of anonymity.) “But he is not covering household expenses and won’t let me take a job where I might face the public like in a clothing store or a restaurant.”

The caller told the phone counselor that Egypt’s currency devaluation had shattered their family budget and undermined the understanding she had reached with her husband about spending household funds.

“I did not take this money like a child sneaks coins for sweets,” she said. “He paid me a certain amount every month for the needs of the children and the food expenses, but this sum is no longer enough. My husband refused to understand that.”

Osama Al-Hadidi, coordinator of the Al-Azhar International Center for Electronic Fatwas, said the next step is a follow-up visit to the caller’s home.

“We are responding with time and resources to the grand sheikh’s call to reduce the number of divorces in Egypt.”