(RNS) — None of us could escape the image on social media this week. Everywhere we scroll, there’s the face of Nick Sandmann, feet away from Nathan Phillips. A sea of white faces in red caps sneering at an elderly Native American man peaceably banging a drum.

In the wake of the run-in between Phillips, an indigenous peoples activist, and Sandmann’s group of Covington Catholic high schoolers after the March for Life, the same question keeps coming up: When things go wrong, who gets the benefit of the doubt?

After the initial video of Sandmann and his peers jeering at Phillips, a more complicated narrative allegedly emerged. Phillips approached the boys, it turns out, not the other way around. (Phillips had said as much to the Detroit Free-Press from the beginning.) There was a small contingent of Black Hebrew Israelites yelling at both the Covington students and the Native protesters. Sandmann, like Phillips, said he was only trying to diffuse the tension. 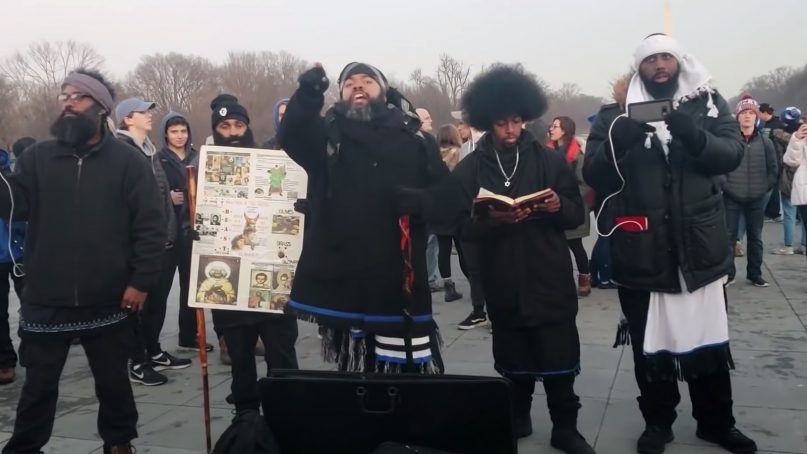 A group of men interacts with Covington Catholic High School students and other people on the National Mall on Jan. 18, 2019, in Washington. Although not specifically identified, the group is thought to be a sect of Black Hebrew Israelites. Video screenshot

The original video of Covington Catholic students in MAGA hats doing a racist “tomahawk chop” is hard to dismiss, however, even if conservatives have attempted to do so, in much the same way that Brett Kavanaugh’s cruelty toward Renate Schroeder was dismissed as harmless high school behavior.

As the incident became another flashpoint in the larger conversation about religion, racism and Donald Trump, Sandmann had a sit-down interview with Savannah Guthrie. He released a statement that has gotten national airtime, followed by an email from his mother and tweets from President Trump defending him. Numerous conservative publications have followed suit.

RELATED: Seeing each other in the public square: The lessons of Covington Catholic

One indication of how acceptable a person is in society is the set of standards to which we hold them. At 17, Sandmann is the same age as Trayvon Martin was when he was killed and five years older than Tamir Rice was when he was shot for playing with a toy gun, a decision that the former Cleveland police union president defended on the grounds that Rice was “a child in a man’s body.” Rice and Martin and many other kids of color in America never get to actually be kids. They are weapons, loaded from the get-go, bigger than they should be and therefore a threat. They never got the benefit of the doubt. Sandmann did.

And what do we know about Phillips? Both the Washington Examiner and The New York Post reported Phillips’ arrests in the early 1970s, which include driving without a license and underage drinking.

But there is more to learn about Phillips, and his is the story that doesn’t get told by conservative outlets. Born and raised in Lincoln, Neb., Phillips was separated from his family at the age of five and raised by a white family. He is 34 years sober. He has two children and a long history of activism. His wife, Shoshana, died of multiple myeloma in 2014. Yet what we see of Phillips in most reports is flattened and reductionist — he is not a person with a rich history of advocating for native people; he is, instead, a caricature, a liar, a fool. 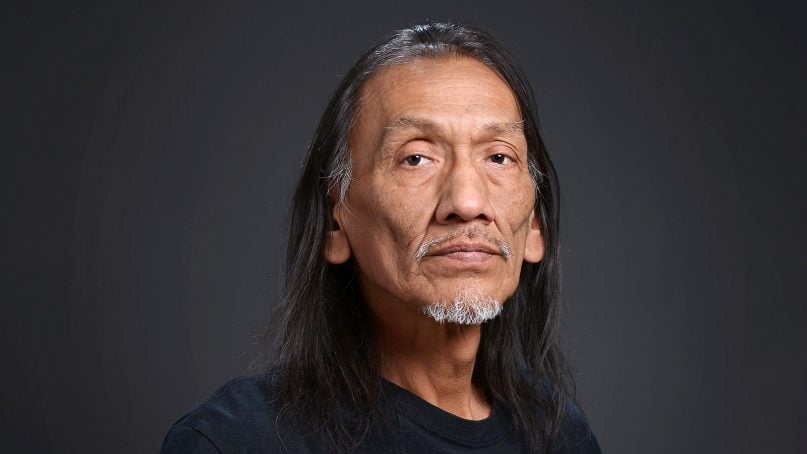 Native American advocate Nathan Phillips, of Ypsilanti, Mich., sits for a portrait in Ypsilanti on May 2, 2015. Phillips gained national attention after a standoff between him and a group of Catholic high school students went viral on Jan. 18, 2019, in Washington, D.C. Photo by Chris Stranad via USA Today

Conservative outlets are leading the charge against Phillips, because the story that a Native American protester intimidated a MAGA hat-wearing teen fits into their narrative about Christian persecution. The coverage of the confrontation itself fits their conviction that the media shapes national events favorably to left-wing narratives. As evidence, Rod Dreher, the conservative blogger, bizarrely heralded the media’s failure to cover the “massive gay March on Washington” in 1993 — which included a man with “a branch coming out of his butt.”

And so, we ask: whose story is it that we choose to tell here? Sandmann will certainly go on to college and live the rest of his life without being dragged down by the weight of his encounter with an older Native American man.

Already celebrated as a conservative hero unfairly maligned by the big, bad liberal media, he would hardly surprise us if, offered thousands of dollars per speech to address conservative groups, he accepted the mantle of a living martyr. Two days after the March for Life, White House Press Secretary Sarah Huckabee Sanders told Fox News that she had “never seen people so happy to destroy a kid’s life.” Sanders tsk-tsked further that news outlets jumped too quickly on the story. “Quit trying to be first and start trying to be right,” she said, a rich statement coming from the woman who regularly lies on behalf of her boss.

Sure, we can blame Twitter, or the news cycle, or our own dopamine rushes for the need to weigh in quickly when we don’t know the whole story, but it’s nothing new. Back in 1711, Alexander Pope famously wrote that “fools rush in where angels fear to tread,” bearing witness for us moderns that for at least 300 years the human need for certainty can trample caution. Warning people to slow down, let cooler heads prevail has a nice moralizing ring to it. There’s no virtue in rushing to get in a hot take!

But neither is there in ignoring clear evidence of racism and cruelty. As new accounts and new videos of the incident emerged, more stayed the same than changed: Sandmann’s simpering expression remained, as did his immovable opposition to Phillips. (In his “Today” show interview, Sandmann says he now wishes he “could’ve walked away and avoided the whole thing.” The use of “could’ve” is doing a lot of work there — he always could have chosen to walk away. He chose not to.)

The national conversation about the confrontation at the Lincoln Memorial should always have been how we treat Native Americans, older people, and the marginalized, not whether a white kid got a bad rap in the media. It is a good thing to hold one’s tongue when there is more to be learned; it is an even better thing to speak up when injustice occurs.

The nature of social media — which is to say, the nature of humanity — is to speak imperfectly. We may need to apologize, or ask questions, or wait. But in the oft-memed words of Desmond Tutu, to be neutral in situations of injustice is to choose the side of the oppressor.

I hope Nick Sandmann profoundly reconsiders the orientation of his heart. And I hope that when he does, he considers the example of Nathan Phillips, who is not perfect but who has devoted his adult life to the service of others. In a 2000 profile of Phillips, he tries to make sense of all of it — the activism, the work, the drive to keep going in the face of seemingly insurmountable obstacles:

“There is a purpose for all this,” Phillips said. “I just don’t know it yet.”

(Laura Turner is a freelance journalist covering religion and politics for places like The Atlantic, Buzzfeed, and The New York Times. She lives in San Francisco.)