NAIROBI, Kenya (RNS) — There’s nothing strange about a Roman Catholic bishop in this east African nation calling for an end to the use of contraceptives. But when a bishop here cited Kenya’s acute shortage of priests late last year as a reason to obey the Vatican’s longstanding ban on artificial forms of family planning, he ignited a larger debate about family size and poverty.

“I’m asking Christians to have more children and not to be afraid because of the economy,” Bishop Paul Kariuki told Catholics in November at an ordination ceremony at St. Peter and Paul Cathedral in Nembu. “Let us have a large family of three, four, five or even more so that we can have people to serve this country.”

Edwin Wekesa, a 46-year-old plumber and one of Kenya’s 7.5 million Catholics (about one-third of the country), told Religion News Service that the bishop’s teachings about contraception ignore the plight of poorer Kenyans who struggle to make ends meet.

“You have to bear children you can take care of,” said Wekesa, a father of two who lives in Kayole, a slum on the outskirts of Nairobi, the capital. “It’s not a sin to use contraceptives to plan for your family because you need money to feed these children, take them to good schools and provide medical care for them.”

Bishop Kariuki’s speech has revived a still unsettled controversy the bishops caused two years ago when they fervently opposed the distribution of a tetanus vaccine, claiming the solution was laced with a hormone said to cause infertility in women. The vaccine, they charged, was targeted at women of child-bearing age.

Late last year the bishops also opposed a proposal by government and rights groups to have teenagers use contraceptives. The church instead said pregnancy among minors was a form of child abuse that should be dealt with by law enforcement.

“Agreeing to provide contraceptives only means we have given a go ahead to teenagers to engage in sex, which is against the law,” read a church statement issued at the time. “The use of contraceptives exposes the young ones to long term side effects that could harm their reproductive health.”

Joseph Karanja, chairperson of Catholics for Choice, said the bishops have consistently put church teachings and growth of the Catholic population above public health concerns. “The church here has been in the forefront to encourage huge families and fight government initiatives such as immunization and sex education,” he said. Catholics for Choice has called on the Vatican to suspend the ban on the use of contraceptives altogether.

The church’s concerns about a shortage of priests is real. In May last year, Pope Francis voiced alarm about the acute shortage of priests worldwide, saying numbers were dwindling instead of increasing. The pope said he was ready to see married men especially in isolated communities becoming priests because the church was running short of clergy. 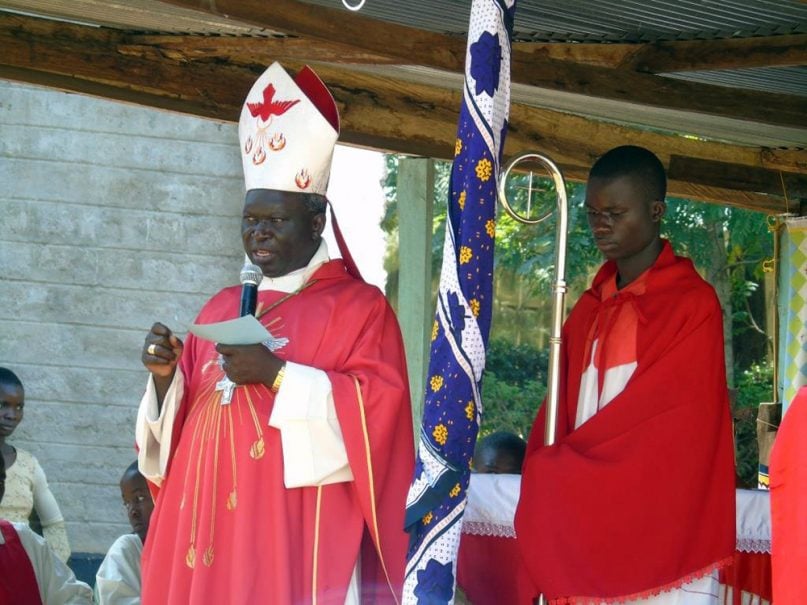 But Bishop Philip Anyolo, the chairman of Kenya Conference of Catholic Bishops, told Religion News Service that the issue of contraceptive use went beyond the question of the supply of priests.

“The use of contraceptives is against God’s will and has side effects to women’s reproductive health,” Anyolo said. “The issue of children should be left to God to control because he is the one who gives children. We should accept the number of children God gives us.”

Some Catholics agree with the bishop. Mercy Anyango, who is a Catholic and mother of seven, praised the bishop’s message and encouraged other women to stop taking artificial contraceptives, saying Jesus Christ couldn’t have been born had his mother Mary taken contraceptives.

“We are saved and free from sin because of our Lord Jesus Christ,” said Anyango, 48. “Jesus could not have been born if Mary had taken contraceptives. God has plans for every life.”

(This story has been changed from an earlier version, which overstated the number of Catholics in Kenya.)