Sunday evening the newly minted Democratic representative from Minnesota, a Muslim immigrant from Somalia, tweeted out criticism of the the pro-Israel lobby AIPAC that traded in the classic anti-Semitic trope of rich Jews using their money to buy political influence.

There ensued a firestorm of criticism from Democrats and Republicans alike, culminating in a statement Monday afternoon from the Democratic House leadership taking Omar to task for using “anti-Semitic tropes and prejudicial accusations about Israel’s supporters.” Whereupon Omar tweeted as straight-up an apology as you’re likely to see in public life these days:

Anti-Semitism is real and I am grateful for Jewish allies and colleagues who are educating me on the painful history of anti-Semitic tropes. My intention is never to offend my constituents or Jewish Americans as a whole. We have to always be willing to step back and think through criticism, just as I expect people to hear me when others attack me for my identity. That is why I unequivocally apologize.

At the same time, I reaffirm the problematic role of lobbyists in our politics, whether it be AIPAC, the NRA or the fossil fuel industry. It’s gone on too long and we must be willing to address it.

It wasn’t a perfect apology. Omar said she was sorry for causing offense, not for getting her facts wrong. (AIPAC is not a political action committee that contributes money to candidates.)

Moreover, her understanding of lobbying is, shall we say, a bit unsophisticated. What about CAIR, the NAACP Legal Defense Fund, NARAL, and the ACLU? There are lobbyists on all sides in American politics, and politicians wouldn’t know what to do without them.

Still, you’re not mincing words when you “unequivocally apologize.” After the New York Times reported Rep. Steve King saying, “White nationalist, white supremacist, Western civilization—how did that language become offensive?,” the Iowa Republican’s response was, “I regret the heartburn that has poured forth upon this Congress and this country and especially in my state and in my congressional district.” Compare and contrast.

Unsurprisingly, President Trump was unprepared to let Omar off the hook. “I think she should be ashamed of herself,” he told reporters on Air Force One on his way to El Paso Monday evening. “I think it was a terrible statement, and I don’t think her apology was adequate.” Then, on Tuesday, he doubled down, calling on her to resign from Congress “or she should certainly resign from the House Foreign Affairs Committee.”

That’s pretty rich, coming from the guy who gave aid and comfort (“good people on both sides”) to the alt-rightists who in 2017 marched through Charlottesville chanting, “The Jews will not replace us.”

But that was then. Now, Trump and his reelection handlers have decided to use the anti-Israel sentiments of a handful of congressional Democrats to drive a wedge between Jews and the party that has overwhelming held their allegiance for more than a century.

Thus, in his State of the Union address, Trump not only celebrated his recognition of Jerusalem as the capital of Israel but managed to devote more words to denouncing anti-Semitism than he did to his “major” priorities of rebuilding the nation’s infrastructure and improving its health care system combined.

Will it work? Color me skeptical.

It’s not just that, in 2016, Jews favored Clinton over Trump 71 percent to 23 percent, and that, according to the latest polling, 72 percent of them strongly disapprove (and another seven percent somewhat disapprove) of the job Trump is doing as president. If history has taught us anything, it’s that when Christians are on the march, Jews run in the opposite direction. Or to put it another way, Trump’s pandering to white evangelicals is more repellant than his pandering to us is attractive.

That will be the case as long as Democratic leaders continue to draw lines in the sand when it comes to anti-Semitism. And as long as Ilhan Omar et al. show themselves willing to learn. 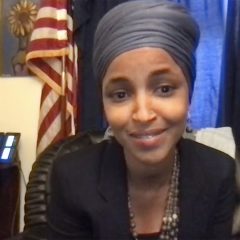 News
Rep. Ilhan Omar, others encourage US to rebuild refugee resettlement ahead of World Refugee Day