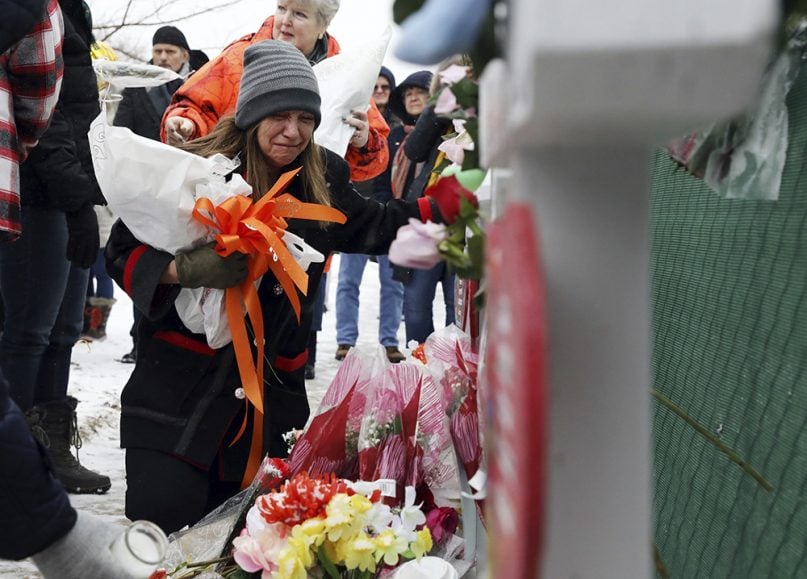 WHEATON, Ill. (RNS) — Saturday night, the day after the shooting at a factory that killed five people, I was asked to offer the closing prayer at a church vigil in North Aurora and provide trauma care after the service.

As the service came toward a close, the teaching pastor invited me up to speak as the attendees finished praying out loud with one another in pairs and small groups. Though I could not make out the muffled words I overheard being spoken as I walked to the stage, I heard both grief and hope in their voices.

I was deeply moved by the grace and compassion I witnessed among those who had gathered to mourn, offer support, seek meaning and worship together.

I’ve spent my career studying disasters like mass shootings; I’m also a Hurricane Katrina and stage IV cancer survivor. Through these experiences I’ve learned that many faith traditions have a wellspring of helpful teachings on understanding and responding to human suffering. In fact, several of the world’s monotheistic faiths teach that those who suffer (e.g., mourn, struggle, are poor in spirit, are persecuted) are blessed.

Unfortunately, people of faith sometimes latch onto ideas about what the “blessing” of adversity looks like — ideas that are not just uninformed, but potentially hurtful to those facing hardships.

It’s natural and beneficial to want to move toward growth in times of suffering like the Aurora mass shooting. But science tells us that those blessings are often different from the ones people expect.

When survivors anticipate that tragedy will lead to significant growth, they may feel guilt, shame, and self-doubt if that growth doesn’t happen. Conversely, when their loved ones or community expect it of them, they may be subject to victim blaming, judgment or even have their faith called into question.

University of Minnesota professor Patricia Frazier and colleagues have studied this difference between perceived growth (how we see our situation) and actual growth (how our situation really is). Her research looks at the way trauma survivors view their growth in retrospect and compares that to how they reported growth when they were going through it. In one 2009 study, she found that those who experienced significant distress following a trauma later overestimated the growth that followed. 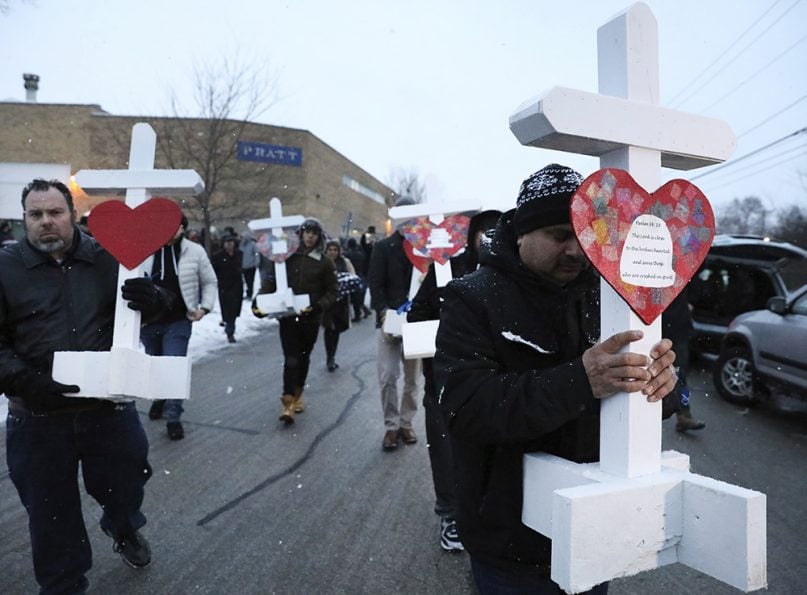 Casildo Cuevas, right, carries a victim’s cross as he walks to the Aurora police station after a makeshift memorial Sunday, Feb. 17, 2019, in Aurora, Ill., near Henry Pratt Co., where five were killed on Friday. (AP Photo/Nam Y. Huh)

Their findings suggest that seeing ourselves as having grown in the midst of adversity may be one of the ways we cope with suffering. This may be particularly true when extreme situations overwhelm our capacity for resilience; holding onto the hope that something good can come out of a bad situation may serve as a source of strength or solace that allows us to endure hardships.

At the same time, perceiving growth where there isn’t any may cause harm if left unchecked. Consider the husband who clings to a narrative of growth instead of facing the reality that his unaddressed pain and blind spots are sabotaging his relationships with his wife and children. By hiding from the harsher reality, he may refuse to acknowledge that he still needs to grow, and his family relationships suffer even more.

When tragedy strikes, it can overwhelm our mind’s natural ability to make sense of suffering. It can turn our view of the world upside down and leave us with more questions than answers. Incorporating disruptive life events into our worldview is rarely easy or quick. Cancer survivor studies reveal, for instance, that the ability to make meaning of suffering typically takes numerous intentional, sustained attempts over a prolonged period of time.

Yet many people hold onto the notion that wisdom is automatically and spontaneously imparted by suffering. We as a culture believe that we are resilient to major life stressors and will come out on the other side stronger than before (i.e., “what doesn’t kill you makes you stronger”).

Don’t get me wrong. I believe growth is possible from adversity, and for some even quickly and effortlessly.

But according to Arizona State University researchers Frank Infurna and Suniya Luthar, natural resilience to life-altering events (e.g., spousal loss) may be less common than most assume. Using a longitudinal dataset dating back to the early 1980s, they found that participants who experienced a significant life stressor experienced sharp declines in well-being that sometimes persisted for years.

One of the reasons it’s so hard for people to bounce back from adversity is what researchers refer to as a loss spiral, where an initial loss triggers suffering, suffering then leads to additional losses, continuing in a downward cycle. Numerous studies have shown that these sorts of losses are often more influential on a person’s life than possible gains that might be garnered from surviving a trauma.

Growth doesn’t just cancel out all the struggles of suffering. It would be nice if growth were somehow guaranteed, if it always came as a wonderful gift that somehow over time compensated for suffering. But sometimes growth comes at devastating and painstaking costs, and sometimes not at all.

The blessing of suffering isn’t growth. It’s being reminded that our lives have meaning and that we aren’t alone in our hurts — whether we grow or not.

(Jamie D. Aten is executive director of the Humanitarian Disaster Institute at Wheaton College and author of “A Walking Disaster: What Surviving Katrina and Cancer Taught Me About Faith and Resilience.” He is also a spokesperson for Prayers & Action, which is committed to ending senseless gun violence and helping survivors. The views expressed in this commentary do not necessarily represent those of Religion News Service.) Religion Hub
Families of 9 killed in SC church settle with feds over gun
Follow us on Facebook!
Submit your photos to RNS