BLADENSBURG, Md. — To Steven Lowe, who drives past it routinely, the nearly century-old, 40-foot concrete structure in the middle of a traffic circle plainly is a Christian cross, a religious symbol the American Humanist Association argues doesn’t belong on government property.

To Mary Ann LaQuay, the “Peace Cross” that bears the name of her late uncle, Thomas N. Fenwick, and 48 other men who died in World War I, is “not a symbol for religion. It’s a symbol for remembrance.”

Soon the Supreme Court will decide who is right.

Erected just outside Washington, D.C., by the American Legion more than 90 years ago, the cross — also known as the “Bladensburg Cross” — is the center of a lawsuit the association filed in 2012, arguing the cross’ location is unconstitutional.

Three years later, a district court ruled against the humanists, saying ownership of the cross by the Maryland-National Capital Park and Planning Commission, which acquired it when it took over the traffic circle in 1961, is appropriate because it maintains the highway median.

But the 4th U.S. Circuit Court of Appeals reversed the lower court’s decision in 2017, ruling that the monument had “the primary effect of endorsing religion and excessively entangles the government in religion.”

On Wednesday (Feb. 27), the case will be heard by the Supreme Court. 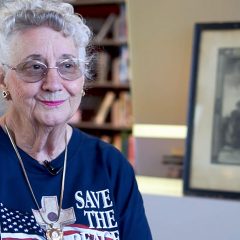 Mary Ann LaQuay’s uncle died while serving in World War I, and his name is on the Peace Cross plaque. Video screenshot via Renee Green 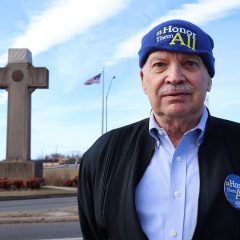 Some say the “passive” monument, dedicated in 1925, is not coercing anyone to believe in Christianity. Others say it inappropriately links American patriotism to one faith despite the religious diversity of the country.

“I think it’s wrong to have government favoring or representing itself as any one religion,” said Lowe, a plaintiff in the case and a Methodist-turned-humanist who lives less than four miles from the cross.

But LaQuay, whose mother was one of the Gold Star Mothers who pushed for the monument, says she can’t imagine the cross not staying where it is, as it is.

“It would be a sacrilege to do anything to it, to move it, to change it, to do anything,” said LaQuay, who still lives nearby. She said she thinks of her uncle when she passes by the memorial. “That to me is where my uncle is buried even though his body is not there. His spirit is there with all these other men.”

Though the case is the latest touching on religion to reach the high court, the upcoming arguments hearken back to previous legal wrangling over Ten Commandments displays that proliferated across the country decades ago, according to Howard Friedman, founder of the Religion Clause blog. The Peace Cross plaque in Bladensburg, Md., features the names of soldiers who died during World War I. RNS photo by Adelle M. Banks

In those cases, as in this one, supporters of the displays argued that they were “passive,” while opponents said they violated the First Amendment’s Establishment Clause. In 2005, the court issued split decisions on two Ten Commandments cases, leaving the way unclear for the Bladensburg case.

Particularly vexing will be the remedy if the cross is found to be a breach of the First Amendment’s Establishment Clause. “There was some suggestion — why don’t you just knock the two arms off the cross?” said Friedman, an emeritus law professor at the University of Toledo. “That doesn’t sound like much of a remedy to me but maybe it is. Could it be transferred to private property? Do you have to knock it down?”

Lowe advocates cutting off the cross’ arms to “turn it into a pillar,” though he admits that option is “rather drastic.” He also suggested that it could be moved to private property or removed altogether.

Jeremy Dys, a lawyer representing the American Legion, said he is concerned that if the Supreme Court declares the Peace Cross unconstitutional it could lead to calls for the removal of other monuments featuring crosses.

“If the 4th Circuit decision is allowed to stand, it puts at jeopardy memorials just like it all over the country,” said Dys, deputy general counsel of First Liberty Institute, which is working with Jones Day lawyers on the case. “And it’s going to start not only with a bulldozer at Bladensburg, but that’s going to roll across the river there to Arlington National Cemetery.” 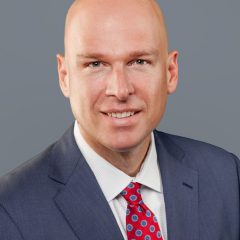 The military cemetery includes two World War I memorials, the Argonne Cross and the Canadian Cross of Sacrifice. The acting solicitor general of the United States will be one of the lawyers arguing in favor of the cross’s constitutionality during the 70 minutes allotted for the court’s consideration.

Monica Miller, who will argue for the American Humanist Association, said a ruling for the Bladensburg Cross would not doom other cross-shaped monuments.

“The Supreme Court has been very clear that when it evaluates religious displays it does so in the context of that one display,” she said. “For instance, when it strikes down a Ten Commandments like it did in the McCreary County (Ky.) case, it didn’t say all Ten Commandments have to come down.”

Miller, the AHA’s senior counsel, pointed to California cases involving crosses on Mount Soledad and in the Mojave National Preserve, in which the land underneath the memorials was transferred to private ownership.

She said that, of all the cases where memorial crosses were found to be unconstitutional, she could only confirm that one — a 35-year-old, 37-foot cross at an Army barracks in Hawaii — was dismantled. The 40-foot Peace Cross in Bladensburg, Md., was dedicated in 1925 as a World War I memorial. RNS photo by Adelle M. Banks

The Maryland commission that maintains the Bladensburg Cross called the memorial “a centerpiece of one county’s civic life” and asked in its brief that the high court overturn the “gravely incorrect decision” by the appellate court.

Religious groups, filing among the dozens of amicus, or friend-of-the-court, briefs, have asked the court for clarity on interpreting the long-debated Establishment Clause and have argued for and against the appropriateness of the cross on government land.

“Maintaining a nearly century-old war memorial at a busy intersection is hardly an official declaration in law that Christianity is the government’s preferred religion,” wrote a coalition including the National Association of Evangelicals and the Church of Jesus Christ of Latter-day Saints.

But the Anti-Defamation League and Americans United for Separation of Church and State maintain that government displays of crosses at veterans’ memorials “is deeply hurtful and exclusionary to the countless non-Christians who have died in service to our Nation.”

The Baptist Joint Committee for Religious Liberty argued that erecting additional “government crosses” would be “religiously divisive” and added, “If the Bladensburg Cross is allowed to remain, the sole reason should be that it is grandfathered.” 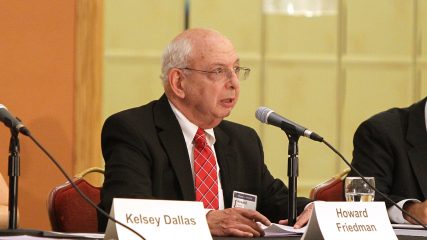 Howard Friedman participates in a panel at the Religion News Association conference on Sept. 15, 2018, in Columbus, Ohio. RNS photo by Kit Doyle

The Utah Highway Patrol Association, which has had to remove some of its memorial crosses from state land, argued in its brief for maintaining the long tradition of using crosses to note sacrifice and tragedy: “If anything, it would be an establishment of irreligion to exclude their use.”

“The problem is that, whichever way it comes out,” he said, “you’ve got groups that are going to be pushing the envelope.”