But it is not morally neutral, argues a group of Southern Baptist and other evangelical leaders in a new declaration about technology and ethics.

“We affirm the use of AI to inform and aid human reasoning and moral decision-making because it is a tool that excels at processing data and making determinations, which often mimics or exceeds human ability,” according to the statement titled “Artificial Intelligence: An Evangelical Statement of Principles.”

“While AI excels in data-based computation, technology is incapable of possessing the capacity for moral agency or responsibility.”

Dozens of people gathered Thursday (April 11) at an event hosted by the Southern Baptist Convention’s Ethics and Religious Liberty Commission for a discussion about the implications of artificial intelligence on topics ranging from faith to foreign policy.

ERLC President Russell Moore said the technological innovation could lead to new ways of sharing translations of the Bible with people across the globe who have yet to hear the gospel, and it already allows blind believers to listen to a smart speaker recite portions of the Bible.

But he said it is crucial to raise spiritual questions about the use of AI.

Jason Thacker, ERLC’s creative director, developed the five-page statement with the assistance of experts in theology, technology, law and medicine. 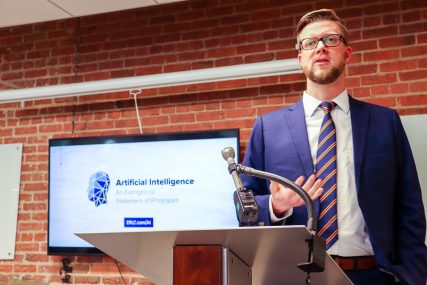 The statement aims to help evangelicals proactively navigate their use of technology like smartphones and virtual assistants such as Siri or Alexa from a scriptural perspective that focuses on the ethics of human dignity.

Thacker compared modern technology to the story in the biblical book of Exodus where Egyptians created and worshipped a golden calf.

“If we don’t think about what we’re creating with artificial intelligence,” he said, “we’re going to fall prey to the same temptation to worship the creation rather than the creator.”

Taylor Barkley, program officer for technology and Innovation at the libertarian Charles Koch Institute, said he “couldn’t agree more” with the statement’s declaration that “human beings should develop and harness technology in ways that lead to greater flourishing and the alleviation of human suffering.”

Barkley, an advocate of “permissionless innovation,” said he appreciated the statement’s aim of diminishing fears about the future of technology and said “concerns should be addressed as we arrive at them rather than throwing darts at whatever may come.”

The statement urged that AI should be used to “identify and eliminate bias inherent in human decision-making.” But data should not be used to benefit the powerful or harm the weak.

“We deny that human agency or moral culpability in war can be delegated to AI,” it says. “No nation or group has the right to use AI to carry out genocide, terrorism, torture, or other war crimes.”

The signatories also condemned using AI for what they consider inappropriate sexual purposes, including objectifying of human beings.

“AI should not intrude upon or substitute for the biblical expression of sexuality between a husband and wife according to God’s design for human marriage,” they said.

RELATED: Should we live to be 500? Christians and secularists come together over transhumanism

The statement also affirmed the value of work as “part of God’s plan for human beings” and said technology should be used to enhance it rather than replace it.

“Humanity should not use AI and other technological innovations as a reason to move toward lives of pure leisure even if greater social wealth creates such possibilities,” the statement says.

In an interview after the event, Moore said the ERLC is planning to develop curricula and other resources for churches as parents, clergy and Sunday school teachers grapple with whether or how to use smartphones and tablets in worship.

“The number one question that I get right now in terms of personal ethics is about technology,” he said. Martini Judaism
Will Chat GPT rot our brains?
Follow us on Facebook!
Submit your photos to RNS