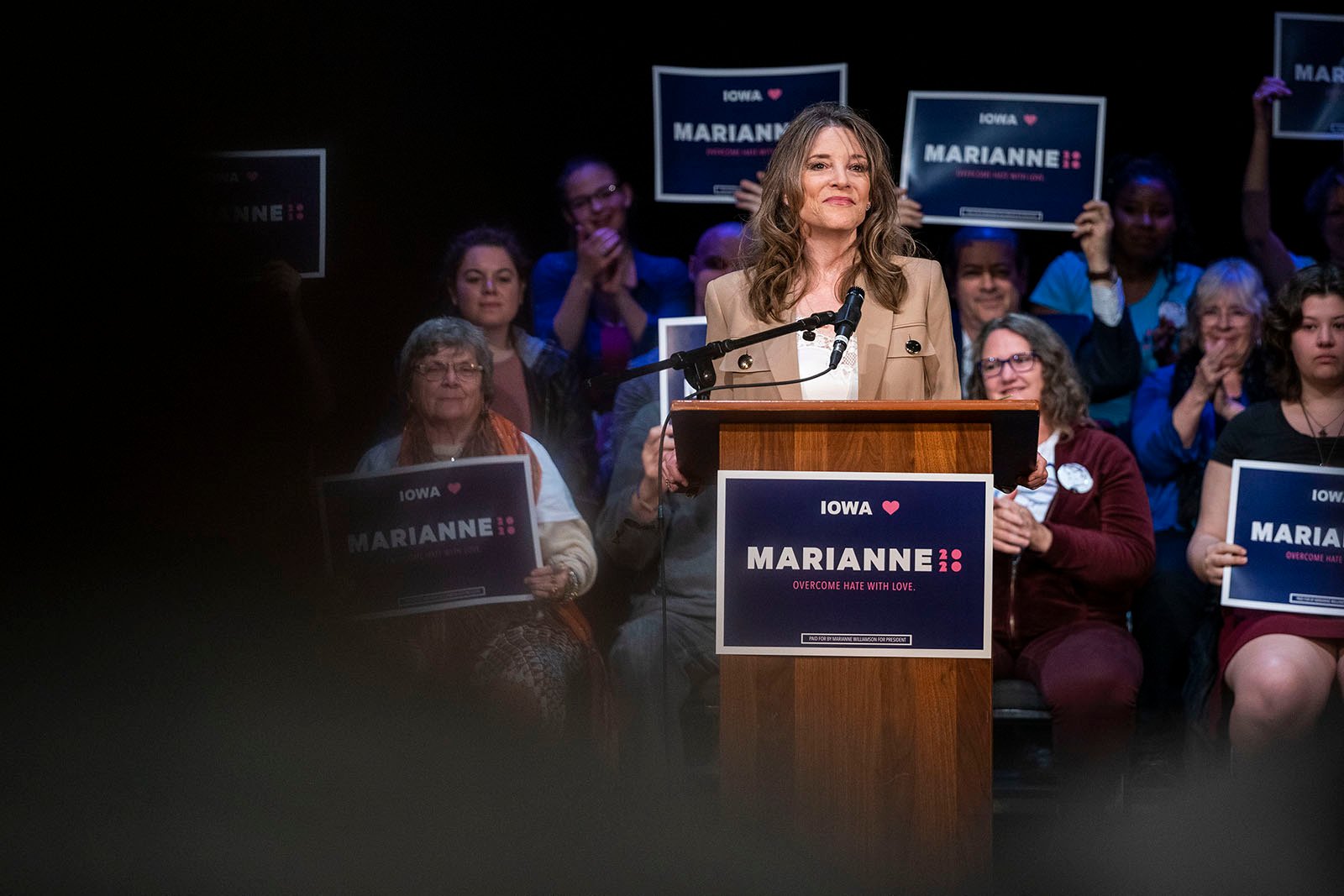 Marianne Williamson campaigns for president at the Sondheim Center in Fairfield, Iowa, on Wednesday, April 10, 2019. Fairfield is home to Maharishi University of Management, a school founded by Maharishi Mahesh Yogi that attracts students for its "consciousness-based" education model that includes the practice of Transcendental Meditation. RNS photo by KC McGinnis
April 12, 2019
Jack Jenkins

(RNS) — The 2020 race to the White House has become uncharacteristically religious in recent months, with presidential hopefuls Indiana Mayor Pete Buttigieg, Sens. Cory Booker and Elizabeth Warren and former Obama cabinet secretary Julian Castro all taking time on the stump to opine at length about faith, perhaps trying to summon a religious left as a potent political force to counter the religious right.

Amid all this God-talk, only one candidate talks about the spiritual world for a living: Marianne Williamson.

“Memo to the elite: America is a religious nation,” the author and entrepreneur told Religion News Service in a recent interview, her voice tinged with what sounded like the slightest Texas twang, an echo of her childhood in Houston. “The lack of a vibrant spiritual conversation is to the detriment of American democracy, because spirituality means the path of the heart.”

RELATED: ‘We need to inspire the new, not just curse the darkness’

Spirituality is key to understanding Williamson's curious political vision and her atypical path to politics. Since the early 1980s, Williamson, now 66, has had a wildly successful career as a spiritual teacher of “A Course in Miracles,” an esoteric 1976 volume that psychologist Helen Schucman wrote, claiming she was taking dictation from Jesus Christ.

Williamson herself is the author of seven New York Times best-selling books, including her first, 1992's "A Return to Love." Its pages focus on the value of spiritual transformation and insist the greatest “miracle” is attaining an awareness of love's presence in life.

Since 2011, Williamson's largest pulpit has been her regular guest spot on the Oprah Winfrey OWN Network’s “SuperSoulSunday."

Her love-focused spirituality is connected to religion, then, but also distinct from any traditional politician's faith. She maintains a Jewish identity, and last year she told the Jewish Telegraphic Agency that she attended Hebrew school growing up, still makes her way to synagogue for Jewish High Holidays and may have become a rabbi had her education been different.

Yet today she is known as a key leader in a loose community of positive, self-actualizing celebrities, from Kim Kardashian to Oprah Winfrey, the latter of which helped cement Williamson's place in popular culture.

As Williamson put it: “My religion is Judaism, my spirituality is universal.” Marianne Williamson campaigns for president at the Sondheim Center in Fairfield, Iowa, on Wednesday, April 10, 2019. "For our generation, connecting spiritual pursuit with political action felt natural," she said during her speech. RNS photo by KC McGinnis

How universal her message is with voters is difficult to answer, as her name often doesn't make it into major polls. But Williamson's sheer name recognition makes her a difficult presence to ignore. As does her experience: she has already run unsuccessfully as an independent for a California congressional seat in 2014, and she has been speaking publicly about politics since at least 1997, when she published the book "Healing the Soul of America." (Her latest, “A Politics of Love,” is slated for publication in late April.)

And in a crowded Democratic field, with a roster of established liberal politicians desperate to distinguish themselves, the sometimes enigmatic Williamson stands out as a voice of striking clarity when it comes to religion, politics and race.

Her ideology is sometimes cast as a synthesis of New Age spiritualism and self-help — her most famous quote (“Our deepest fear is not that we are inadequate. Our deepest fear is that we are powerful beyond measure”) is often misattributed to Nelson Mandela.  And the material that made her famous, which she leans on in campaign appearances, may be a spiritual bridge too far for some voters.

In a February address at Harvard Divinity School, Williamson touched on the Enlightenment, the Founding Fathers and quantum physics before suggesting that the 20th century was when Americans realized something was “deeply unbalanced” about society.

“We came to understand, just as it says in ‘A Course in Miracles,’ ‘religion and psychotherapy are, at their peak, the same thing,’ religious principle — in terms of universal themes — is not about doctrine, and it’s not about dogma, it’s about… the laws of consciousness,” she told the crowd at Harvard.

When asked to boil down the core teachings of Schucman’s book, Williamson explained it this way: “God is love. We are children of God. Love is both our identity and our purpose. When we remember that, life works. When we forget that, chaos ensues.” 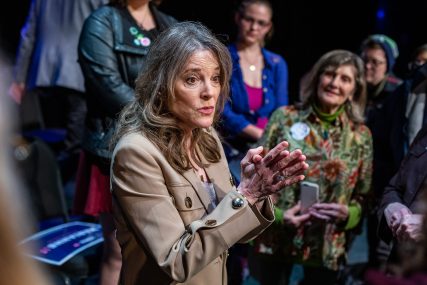 Marianne Williamson talks to residents while campaigning for president at the Sondheim Center in Fairfield, Iowa on Wednesday, April 10, 2019. RNS photo by KC McGinnis

But in a campaign season in which Sen. Booker told Religion News Service, "the Founders were geniuses, in the sense of really putting into our governing documents a kind of radical love and appreciation that everyone has dignity," Williamson doesn't sound so far from the mainstream.

She has also workshopped her spiritual approach for years. Her run for Congress was rooted in many of these same themes and garnered her a fourth-place finish out of 16 candidates in the primary (though she had the advantage of endorsements from the likes of Kim Kardashian, Nicole Richie and Jesse Ventura and a campaign song written and performed by Alanis Morissette).

Seeking a much higher office this go-round, she has amended the message to fit the moment. She points to what she believes are systemic issues in society at large — racism, anti-Semitism, homophobia, xenophobia and other things she sees as interfering with a loving politics.

Let people of faith join in prayer & meditation for our country this weekend. The powers of the soul will prevail, but only if we invoke them. Dear God, May the angels of our better nature so fill our minds as to cast out all darkness. Lift up our hearts, lift up our nation. Amen

Some political types worry, as they do with Booker, that prosecutorial attacks, not God- and love-talk, are what is needed to counter the GOP's presumptive nominee. But if voters want a contrasting voice, Williamson could not be more opposite. She is loathe to bring up Donald Trump herself, and when questioned directly about whether she would enter into a spiritual exchange with the president, she demurred, saying a debate stage wouldn’t be “the appropriate place for me to enter into a spiritual conversation.”

Instead, she said the “spiritual conversation that would matter” would be an internal one, in which she would call on her heart to be “loving, defenseless and humble” as a source of strength.

Williamson’s reasoning is, in a roundabout way, strategic. 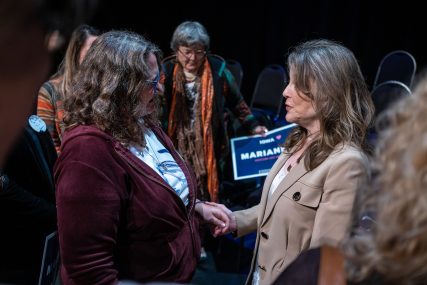 Marianne Williamson talks with Heidi Winn of Fairfield, Iowa, while campaigning for president at the Sondheim Center in Fairfield on Wednesday, April 10, 2019. Winn credits Williamson for comforting her after the death of her son and pledged her support to Williamson in the 2020 Iowa caucus. RNS photo by KC McGinnis

But lest one think Williamson’s “primal love” is nothing more than an airy campaign platitude, she insists her politics are equal parts compassion and tough love. Williamson, who once described herself as a "bitch for God," notes that her philosophy is backed by brass-tacks policy conversations about things such as Medicare for All (she supports it) and the Green New Deal (that too), and includes hard details in at least one widely discussed area: reparations for African Americans.

In fact, Williamson is the only Democratic presidential hopeful thus far to discuss concrete numbers for reparations. “Anything less than $100 billion” would be an insult, she has said, and gave $200 billion to $500 billion as a more likely range in an interview with BuzzFeed. She believes the money should be disbursed over 20 years by a council of entirely black leaders.

Her passion for this policy, she says, comes from both her broad understanding of faith and her reading of American history.

“It is a universal thing that one must atone for sins, errors, mistakes, whatever words you choose to use,” she said. “So a Catholic goes to confession. A Jew goes to Yom Kippur, the holiest day of the year and the Jewish calendar… And in 12-step recovery meetings, one has to make a fearless moral inventory and address the exact nature of one's character defects. Those are all the same principles. In 1864, Abraham Lincoln wrote a proclamation, the day of fasting and prayer, in which he said that a nation, too, must confess its sins.”

Despite her frequent references to faith, Williamson stresses that she is a firm believer in the separation of church and state, noting that as a religious minority she “understands how important it is that our political discourse, which belongs to all of us, not (be) dominated by a religious conversation (that) belongs to only a few.”

Even so, she is excited by the idea of a resurgent religious left and her fellow Democratic candidates' open conversations about their faith.

“I come from a generation where there was a vibrant religious left,” she said, pointing to Yale University chaplain William Sloane Coffin, a civil rights activist and outspoken critic of the Vietnam War. She argued the Democratic Party’s movement away from God-talk was an “aberration” that has led to a “necessary rebalancing” in today’s political discourse.

“That swerve from a deeper respect for and understanding of the inner lives was very damaging politically for the Democratic Party, because it made many people of faith feel under-appreciated, their values even mocked,” she said. Given the early response to her candidacy — Williamson's campaign gatherings skew more toward intimate house parties than raucous rallies — it's worth asking what she hopes to achieve with her campaign. While realistic, Williamson is nothing if not optimistic, and it may be that her run is ultimately geared toward something arguably even more difficult than winning the presidency: changing the nature of American politics.

“My campaign is about a deep and meaningful conversation I'm trying to have here, which I feel is (one) that will transform this country,” she said.

In the meantime, she remains dedicated to fighting what she called the “demons” of society the best way she knows how: with love.

“The only way to defeat dog whistles is to drown them out with angel voices,” she said. “But the angels can only sing through us.”