(RNS) — Marianne Williamson, the spiritual teacher, TV personality and bestselling author of “A Return to Love,” has joined the crowd of Democrats running for president. While many of her fellow aspirants have talked openly about their faith on the primary campaign trail, Williamson, a one-time congressional candidate, has the most experience talking about how moral principles and spiritual values entwine with policy. In this interview, which has been edited, Williamson talked about her hopes for a new politics based on love.

Q: If a voter asks you about your religious identity, how do you answer that question?

My religious identity is that I’m Jewish. As most people know who know my work, I’ve been writing and speaking for 35 years about a set of books called “The Course in Miracles,” which has been referred to as a self-study program of spiritual psychotherapy. It is not a religion, there’s no doctrine or dogma. But I think I would identify my spiritual path as a universal, a spiritual journey.

Q: If you were to boil down the value of that work for you as a presidential candidate, how would you describe it?

God is love. We are children of God. Love is both our identity and our purpose. When we remember that, life works. When we forget that, chaos ensues. That doesn’t mean we have to think of love specifically as God. The word God is not what matters. What matters is love. So whether you think of love in religious terms or not, the ultimate identity and purpose of our life is love.

Q: At Harvard Divinity School the other day, you expressed frustration with a modern tendency to put religion in a box. But you said that 21st century thinking has re-recognized the value of religious teachings.

The Enlightenment of the 18th century — and our founders thought of themselves as Enlightenment thinkers — was a philosophy that liberated Western humanity from the shackles of an overmystified religious dogma. It freed people to think for themselves. Now, in the Enlightenment of the 21st century, we realize that in the 20th century we threw away the baby with the bathwater. The Newtonian model of science came to dominate our entire worldview, and humanity began to see life as a machine.

Pierre Teilhard de Chardin said, “The day will come when, after harnessing space, the winds, the tides, and gravitation, we shall harness for God the energies of love. And on that day, for the second time in the history of the world, we shall have discovered fire.”

I used to think it was this poetic statement, but I realize that if we do not do that, humanity will not survive on this planet another hundred years.

Q: Are Democrats, who are suddenly talking about faith and spirituality more openly than they have in the past, reclaiming that fire?

During my youth, (spirituality and politics) were never separate. JFK said, “This country cannot afford to be materially rich and spiritually poor.” Bobby Kennedy spoke of a contest “for the soul of America.” When the Democratic Party swerved during the ’70s, ’80s and ’90s in such an over-secularized direction, that was the aberration for me. So it’s a good thing that members of the Democratic Party are coming off their over-secularized high horse and understanding that (an interest in) religion and spirituality doesn’t mean you’re less intelligent.

Q: You’ve been to Iowa, New Hampshire, South Carolina. Has your spiritual messaging resonated with voters?

Memo to the elite. America is a religious nation. It’s only the political establishment elite that’s the fringe these days. When I began talking about universal spiritual principles when I began my career, it was treated like some fringe conversation. Today, you’re fringe if you don’t understand the conversation. 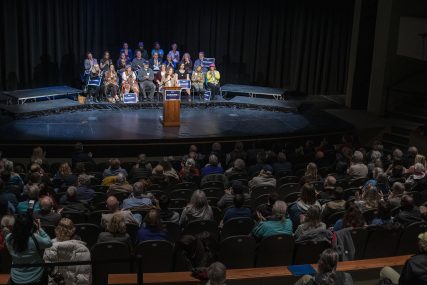 By the way, I have great respect for the separation of church and state. Some people seem to misunderstand what it means. It is one of the most enlightened aspects of our Constitution, put there by the founders with a dual purpose. Number one was to protect the government from interference by religious clergy. And number two, to protect religious practice — or nonreligious practice — from interference by government. It wasn’t there to suppress the religious or spiritual conversation.

Q: So if I’m hearing you right, you see a vibrant religious discourse as not incongruous with American democracy.

Q: Your campaign is taking a leading role in talking about reparations for African Americans. Does that come out of the politics of the heart?

Absolutely it does. I think we would all agree that if you’ve kicked someone to the ground, you have two moral obligations. The first is to stop kicking, and the second one is to reach out your hand and say, “Here, let me help you get back up.” I think anyone would agree that two and a half centuries of slavery is kicking someone to the ground.

At the end of the Civil War, Gen. William Tecumseh Sherman promised every former slave family of four 40 acres (of farmland). In most cases, it wasn’t given, and in the cases where it was given, it was taken back. And what followed was 100 years of what we would call today domestic terrorism. So to me it’s a moral as well as an economic debt to be paid. And until we do, we will continue to pass generation to generation, this karmic toxicity that underlies race relations in America.

Q: You don’t spend a lot of time talking about Trump, at least compared to other candidates. Why is that?

The people who voted for him and just think he’s fabulous, they’re going to vote for Donald Trump, and that’s their right. But I also believe there are people who voted for him who are at the very least disturbed by some things and are open to a compelling alternative vision. If all I do is talk about how terrible Trump is, that’s shaming them — why would that make them open to what I have to say? I want to inspire people.