(RNS) — Violent attacks against U.S. Jews doubled in 2018, according to the Anti-Defamation League’s yearly audit of anti-Semitic incidents.

Yet the report, published days after a synagogue shooting in Poway, Calif., that killed one woman and injured three other people, shows that despite the grim spike in violence against Jews, physical assaults remained relatively rare. Anti-Semitic harassment and vandalism are far more common.

Overall, the ADL counted 1,879 incidents of anti-Semitic assault, harassment and vandalism in the United States in 2018, down 5% from the 1,986 incidents ADL recorded in 2017, but still the third-highest year on record since the ADL began tracking such data in the 1970s.

The dramatic jump in violent assaults appeared the most worrying. It included the massacre of 11 Jews at the Tree of Life synagogue in Pittsburgh, the deadliest attack on Jews in the history of the U.S.

“We’ve worked hard to push back against anti-Semitism, and succeeded in improving hate crime laws, and yet we continue to experience an alarmingly high number of anti-Semitic acts,” Jonathan Greenblatt, ADL’s CEO, said in a statement.

Only 13% of the 1,879 incidents in 2018 — or 249 — were attributed to extremist groups such as white supremacists or Neo-Nazis. The report cites two groups in particular: Daily Stormer Book Clubs and Loyal White Knights (one of the largest and most active Klan groups in the nation).

ADL has tracked anti-Semitic incidents for the past four decades. With occasional slight drops like this year’s 5% decline, the number of incidents has trended steeply upward since 2016.

“The fact that we’re down 5 percent doesn’t matter,” said Ira Forman, a former U.S. special envoy to monitor anti-Semitism who is now a visiting professor at Georgetown University and senior adviser on anti-Semitism to Human Rights First. “The more interesting trend line is that it’s way up. It shows that in the last three years there’s been a significant increase in anti-Semitic incidents.”

That increase coincides with the presidency of Donald Trump, though experts said it’s not clear that there’s any direct causal relationship. The president has condemned anti-Semitism and championed the state of Israel, but he has also played down the threat posed by white nationalism and refused to disavow his “very fine people on both sides” comment after the 2017 white-nationalist rally in Charlottesville, Va., that left a counterprotester dead.

Bruce Alexander, a security expert who formerly directed the counterterrorism division for the U.S. Energy Department’s Office of Intelligence, said that white supremacy is nothing new, but in previous eras its adherents targeted African-Americans and particularly black churches.

‘The bombing of the Birmingham church in 1963 directly came from the Ku Klux Klan,” he said. “Now it’s taken on an entirely different veneer.” Kyle Fox, 4, and his father, Brady Fox, hold a sign at a vigil April 28, 2019, in Poway, Calif., held to support the victims of Chabad of Poway synagogue shooting. A man opened fire Saturday inside the synagogue near San Diego as worshippers celebrated the last day of Passover. (AP Photo/Denis Poroy)

Not included in the 2018 report is Saturday’s attack, in which a gunman opened fire in a synagogue in Poway, near San Diego. Congregant Lori Kaye, 60, was killed in the attack, which also injured Rabbi Yisroel Goldstein, 8-year-old Noya Dahan and her 34-year-old uncle Almog Peretz, The Associated Press reported. Coming as it did exactly six months after the Pittsburgh massacre, many Jews fear similar violence at their own synagogues.

“There’s a sense of vulnerability, the likes of which I personally do not recall in my lifetime,” said Rabbi Stuart Weinblatt, president of the Rabbinic Cabinet of the Jewish Federations of North America. “It has a real impact. The story told by the statistics is being felt by the community.”

But he also said he did not anticipate that Jews would stay home from synagogue.

“In the face of assaults and attacks,” Weinblatt said, “there’s a strengthening of the resolve not to succumb to the forces that would try to extinguish Judaism.” 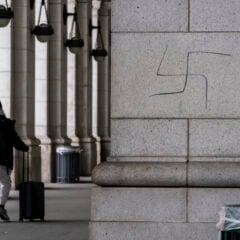