(RNS) — The Church of Jesus Christ of Latter-day Saints announced this morning that church members who wish to marry in a civil ceremony or public wedding will no longer have to wait a full year before being “sealed” for eternity in a Mormon temple.

Until now, the policy has been different for members living in different parts of the world. In the United States, where the church’s official ability to perform weddings has long been recognized by the government, there has been a one-year waiting period between a civil and a temple wedding. In some other nations where the government has not licensed the Church to perform weddings, couples have been able to be sealed in the temple immediately after their civil wedding. 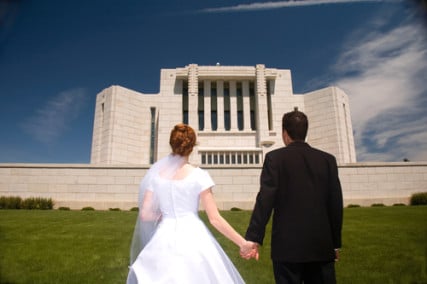 Civil weddings are important to many U.S. members because they are open to everyone the couple wishes to attend, which means that non-Mormon friends and family members can see their loved ones say vows and exchange rings. Temple ceremonies, however, are open only to orthodox Latter-day Saints who hold a current temple recommend, which is a select group even among church members.

In practice, the old policy created heartbreaking situations for many Mormons, especially converts who were sometimes the only people in their families to join the faith. Many have commented before that a religion that makes so much of uniting families forever in temples has caused unnecessary divisions in families here on earth.

In my own life as a Mormon, I’ve known many stories of exclusions from temple weddings. Protestant parents whose son converted to Mormonism were left in the cold when he married a Mormon woman in an LDS temple. His mother had a very hard time getting over the disappointment. And a woman I know who has experienced a “faith transition” and could not get her temple recommend renewed missed being part of her brother’s wedding with the rest of her family.

Now, hopefully, stories of exclusion from what should be a joyous event will be a thing of the past. Couples will be able to choose to have both a civil ceremony and a temple ceremony, though the First Presidency today encouraged local leaders to stress that it’s ideal to have both the wedding and the sealing in the temple. The letter said:

When possible, leaders should encourage couples to be both married and sealed in the temple. Where a licensed marriage is not permitted in the temple, or when a temple marriage would cause parents or immediate family members to feel excluded, a civil ceremony followed by a temple sealing is authorized.

We anticipate that this change will provide more opportunities for families to come together in love and unity during the special time of marriage and sealing of a man and woman.