SÃO PAULO (RNS) — In the past few decades, Brazil has experienced an unexpected Jewish resurgence fueled by the descendants of Portuguese and Spanish Jews forced to convert to Christianity in colonial times, who have lately recovered their lost identity and faith.

Today, thanks to new tools for the study of genealogy and the help of a welcoming rabbi, the Bnei Anusim, or “children of the coerced,” have taken their first steps to be fully recognized as Jews again.

Brazil’s earliest Jewish families were expelled from the Iberian Peninsula beginning in the 16th century, as Spain and Portugal’s colonies in the New World were exploding. Before being deported, many had already been forced to convert to Roman Catholicism and were officially known as “New Christians.”

By the 17th century, at least a quarter of Brazil’s population consisted of New Christians, many of whom rose to economic and political prominence. Their success made them the target of resentment from their countrymen as well as the Inquisition. Many were accused of secretly conducting Jewish rituals and were often imprisoned or tortured.

Facing this pressure, the Anusim abandoned their Jewish traditions over the centuries or combined them with Catholic ideas. The Virgin Mary was frequently associated with Queen Esther, and the figures of Moses and Jesus were often intertwined. Others became skeptical of religion as a whole.

But according to Paulo Valadares, a historian and expert in the Bnei Anusim, a number of New Christian families managed to retain their traditions, avoiding certain foods, keeping what distance they could from the church and marrying within the New Christian community.

The Bnei Anusim — also known by the derogatory Spanish term “marranos” — commonly had two given names: an Old Testament one that was used in the community and the other inspired by the New Testament for public use. Clandestine networks, often with their own secret symbols and language, kept them in touch with each other and with similar communities still living in Europe.

“They also escaped the big cities on the coast and settled in the countryside, where they could live a more reclusive life,” said Valadares.

When the Dutch invaded Brazil in the mid-1600s, some New Christians welcomed their more tolerant new rulers, and many Anusim moved to Dutch territories in the Caribbean or New Amsterdam (later New York) after the Dutch were chased out of their last redoubt in Recife. The 23 founders of Congregation Shearith Israel in Manhattan — the oldest synagogue in the United States — were refugees from Recife.

It wasn’t until the 1970s that a descendant of New Christians named João Medeiros sparked the movement of returning to Judaism. The first Bnei Anusim communities to publicly claim Judaism again were founded in the northeastern part of the country, where many had settled.

The need to understand his own origins prompted Ricardo de Almeida’s journey toward Judaism. Raised as a Roman Catholic, the broadcaster, now 49, had converted to evangelicalism. But in 2016, he hired a genealogist in the northeastern state of Bahia to research his family’s origins.

He soon discovered he had a Portuguese ancestor from the 17th century who had been forbidden to work for the Inquisition because of his New Christian status. “So it was proved that I am a Bnei Anusim,” Almeida said. He submitted his findings to an expert in Lisbon, who certified his Sephardic origin.

As his interest in his Jewish roots deepened, he sought out Rabbi Gilberto Ventura and his wife, Jacqueline, who live in São Paulo. Three years before, in a series of online videos, Rabbi Ventura — himself half Ashkenazi, half Sephardic — had begun to address the question of the Bnei Anusim. 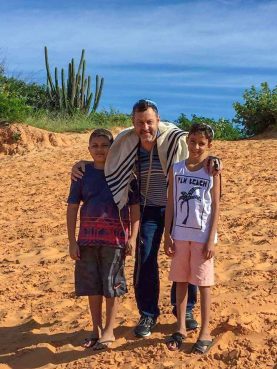 Rabbi Gilberto Ventura poses with boys from his community in the state of Rio Grande do Norte. Contributed photo

Ventura said he had become interested in the Bnei Anusim after his study of Brazilian history had led him to realize how profoundly they had influenced the culture of the country’s northeast.

“People from all over the country started to seek me out,” said Ventura, 45. “They said, ‘Finally someone is speaking for us in the Jewish community.’ I traveled to five states to meet with them.”

“Now I’m a proud member of this group and feel that my mission is to show my fellow Brazilians the Jewish roots we have — which were taken out from us,” said Almeida.

Today the Venturas are the spiritual leaders of 20 communities across Brazil, with more than 900 people in their Sinagoga Sem Fronteiras, or Synagogue Without Borders. Ventura and his wife visit each community at least once a month and otherwise communicate by phone or through the internet. Though being a descendant of New Christians is not a prerequisite for membership, many in the congregations are.

Hélcio Magalhães, a 49-year-old business manager in São Paulo, is another member of Ventura’s community. He also sought information about his family origins and discovered a few New Christians among his ancestors, some of them important historical figures. “A DNA test demonstrated that part of my family came from Israel.”

Now Magalhães is studying Hebrew and Jewish history with the rabbi. “The other day a person interviewed me in a survey and asked my religion. I told him I’m Jewish. Things seem to make more sense for me now.”

Though the traditional Jewish community in Brazil has been slow to accept the New Christians, Venturas’ work is gaining international recognition. In Israel, the head of Jerusalem’s rabbinical court, Rabbi Eliyahu Abergel, has endorsed his conversion process as valid according to Judaic laws and said his work is the fulfillment of Isaiah’s prophecy of the eventual return of the Jews to Israel. Ten members of Ventura’s synagogue are studying at yeshivas in Israel. 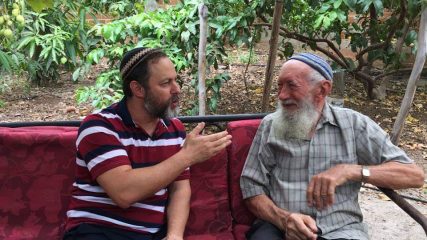 Rabbi Gilberto Ventura speaks with a member of his community. Courtesy photo

Uri Blankfeld, international coordinator of the Institute for Sefardi and Anusim Studies at the Netanya Academic College in Israel, said that his organization has located some 60 Jewish communities in Brazil. “These communities we detected are organized around the Jewish precepts, with regular attendance to the Shabbat and religious festivities. But the number of descendants in the country is immense.”

In the end of last year, Ventura and a young man from his synagogue traveled to New York to attend a 365th anniversary celebration for Congregation Shearith Israel. The rabbi who officiated the ceremony told the young Brazilian in his opening speech: “We’re sorry we had left you behind. What matters is that you finally found us.”

After centuries lost, the Bnei Anusim are ready to make their unique contribution to the international Jewish community.

“I told them they should be proud of themselves,” Ventura said. “I consider them to be the great heroes of the Jewish world nowadays.”