SEATTLE (RNS) — Early in this century, the academic center that I direct undertook a research project to examine religion and regionalism in American public life. Of the eight regions we divided the country into, the most distinctive was the Pacific Northwest — Washington, Oregon and Alaska.

The distinctiveness had everything to do with the region’s low degree of religious identification — something that had been the case ever since Anglo-Americans began settling the place in the 19th century. For that reason, we subtitled the volume dedicated to it “the None Zone.”

Several themes emerged from our exploration of religion and public life in the PNW, specifically with respect to Oregon and Washington (as distinct from Alaska). These included the importance of interfaith cooperation and the prevalence of religious entrepreneurship.

In a place where institutional religion for non-indigenous peoples had never been strong, success required a high degree of enterprise on the one hand and, on the other, a pulling together on the part of religious communities that, elsewhere in the country, had historically kept their distance.

Religion’s primary way of making common cause was environmentalism, which in our view had become the region’s dominant worldview — its civil religion if you will. A gospel of sustainability and biodiversity was strongly in evidence in the Catholic and mainline Protestant churches, the non-Christian and New Age faiths, and among the Nones themselves. 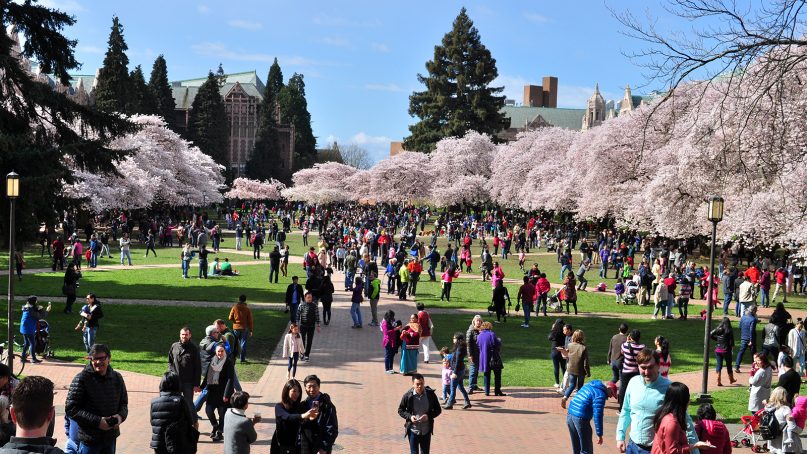 People crowd the University of Washington quad to view cherry blossoms in Seattle in April 2017. Photo by Joe Mabel/Creative Commons

Yet the PNW also had its counterculture, located above all in its sizable evangelical community, where the region’s religious entrepreneurship was especially on display.

As one would expect, PNW evangelicalism was ranged against the dominant culture on abortion and gay rights. Most strikingly, however, the PNW was the one region where a majority of evangelicals took a negative view of environmentalism. In this regional version of the national culture war, environmentalism had become part of a spiritual ideology that evangelicals felt obliged to set themselves against.

The PNW was distinct in another respect as well: It claimed an identity with territory in another country. One can, of course, point to other parts of the U.S. that maintain close ties across the Canadian and Mexican borders, but Oregon and Washington understood themselves to be connected to British Columbia in a different way. In some respects, they were connected more closely to that Canadian province than to the rest of the U.S.

Not surprisingly, perhaps, B.C. turned out to be Canada’s None Zone just as the PNW was America’s. And environmentalism was as much B.C.’s spiritual ideology as it was the PNW’s.

A couple of years ago the University of Victoria’s Centre for Studies in Religion and Society got a Canadian government grant to conduct a study of religion in this cross-border region, known as Cascadia. Among other things, the study would advance and update our earlier findings on the PNW. New quantitative and qualitative data were compiled, and this past week the scholarly team convened at the University of Washington to go over the first drafts of chapters. An aerial view over the Willamette River in Portland, Ore. Photo by Bob Heims/USACE/Creative Commons

The results have confirmed, in a fine-grained way, that Cascadia remains as much the None zone that it appeared to be early in the century — only more so. In Washington and Oregon, the proportion of adults who say they have no religion has risen from just above 20% to 32%, while in B.C. it has gone from 35% to 44%. Among young adults, the proportions are considerably higher.

Although we were aware, at the turn of the century, that the proportion of Nones had grown in the U.S. and Canada, it was far from clear that this would turn into the major trend it has become in both countries. Then, Cascadia seemed like an outlier — a region set apart by its degree of irreligiousness.

Now it seems like a forerunner, a regional laboratory of demography indicating where North America north of the Mexican border is headed when it comes to religion. To me, the most striking discovery of the new project is the change in outlook among the region’s evangelicals.

Two decades ago, they saw Cascadia as a mission territory ripe for making major inroads on the vast number of the unchurched. Then, they understood themselves as at the crest of a powerful evangelical wave sweeping over America.

Now they see themselves as living on the shore of ebb-tide Christianity and are finding ways to accommodate to the dominant culture. Increasingly, they have become open to (if not quite affirming of) LGBTQ members. They are soft on abortion. They embrace the environment. Some even go so far as to foreswear evangelization.

“There’s an effort on the part of evangelicals (in the region) to redefine themselves,” said Michael Wilkinson, a sociology professor at Trinity Western University in B.C. “Their confidence is gone.”