CHARLOTTE, N.C. (RNS) — This week, at Wheaton College in Illinois, specially trained movers will begin organizing, preparing and packing 3,235 boxes of paper items, 1,000 scrapbooks of news clippings dating back to the 1940s and more than 1,000 linear feet of videos, cassettes, reels, films and audio.

All of it documents the life and ministry of evangelist Billy Graham, the Christian college’s most famous alumnus. And soon, all of it will be headed to the Billy Graham Evangelistic Association in Charlotte, N.C., Graham’s hometown.

The big transport trucks that will haul the valuable cargo won’t make the nearly 800-mile trip until mid to late June. But the controversy over moving the Graham materials all began more than two months ago. That’s when it was announced that, after June 1, the materials would no longer be housed at Wheaton’s highly regarded Billy Graham Center Archives. 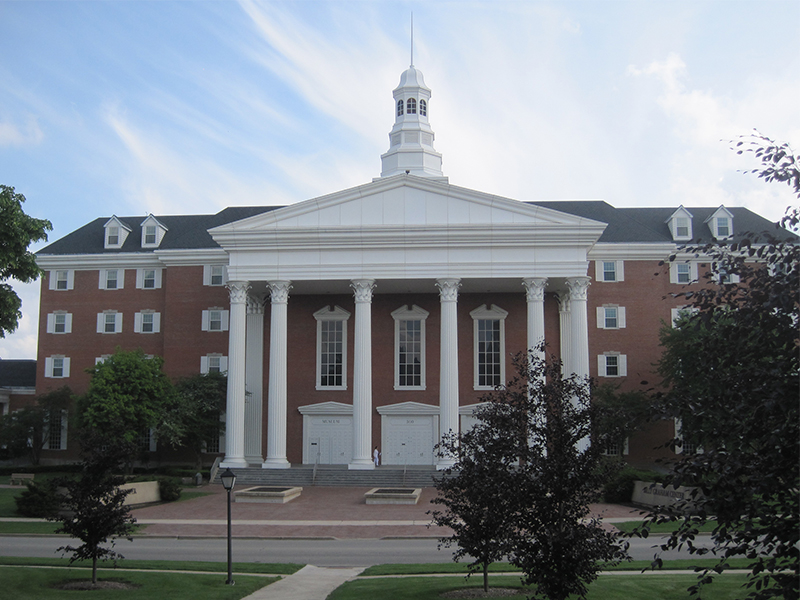 The Billy Graham Center for Evangelism at Wheaton College in Wheaton, Ill., on May 29, 2013. Photo by Christoffer Lukas Müller/Creative Commons

Since it opened with Billy Graham’s blessing in 1980, more than 19,000 scholars, journalists and other researchers from around the world have spent 67,000 hours doing work there.

The BGEA’s Charlotte site does include the 12-year-old Billy Graham Library, but it was not designed as a research facility. Instead, it is a presidential-like museum celebrating the life of Graham, who died last year at age 99, and is a brick-and-mortar continuation of his worldwide evangelism efforts.

“The so-called (Billy Graham) Library is not a library,” said Edith Blumhofer, a longtime history professor at Wheaton who is now completing a study of the music of the Billy Graham Crusades. “It has no archives. It has no archivist.”

In a Sunday email answering questions posed by Religion News Service, Franklin Graham, now president of the association his father founded in 1950, said that “it is the intention of BGEA leadership to provide a first-rate research facility and archival operation with an openness to those who have an interest in studying the life and ministry of my father in the greater context of a Library that clearly demonstrates and reflects the message of the Gospel of Jesus Christ.” 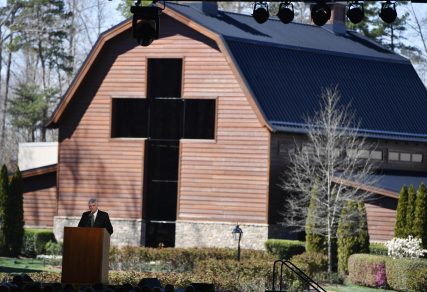 Pastor Franklin Graham, son of Billy Graham, speaks during a funeral service for his father at the Billy Graham Library on March 2, 2018, in Charlotte, N.C. (AP Photo/Mike Stewart)

But many scholars who have written or are writing books and articles about Graham and evangelicalism have already sounded the alarm.

Their fear: that this move is part of a bid by Franklin Graham to control his father’s legacy and make it more closely echo his own conservative political and theological agendas. They worry that Franklin Graham may deny access to the archival materials to scholars and others who don’t share his views or who are unwilling to promote what one called a “sanitized history” of the evangelical movement.

“Nothing about Franklin’s public persona over the last two decades suggests that he would encourage open scholarly inquiry into the legacy of Billy Graham,” said Steven P. Miller, author of “Billy Graham and the Rise of the Republican South” and one of more than a dozen scholars interviewed by RNS.

Elesha Coffman, a professor of history at Baylor University who writes about religion, agrees.

“The fear is that it’s over, that with the relocation of the archives, there will be no more high-quality, objective scholarship on (Billy) Graham and his legacy,” Coffman said.

Scholars also worry that no seasoned archivist or ready-to-open research facility will be waiting for the Graham materials when they arrive in Charlotte later this month. 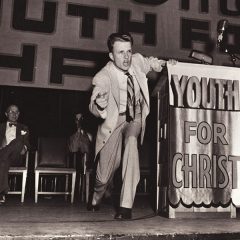 Billy Graham begins his public ministry with the Youth for Christ organization in 1945. Photo courtesy of Billy Graham Evangelistic Association 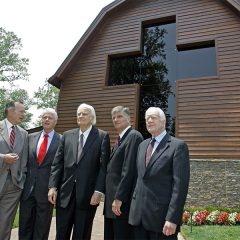 Former Presidents George H.W. Bush, left, Bill Clinton, second left, and Jimmy Carter, right, join Franklin Graham, second right, as they pose with Billy Graham, center, in front of the Billy Graham Library in Charlotte, N.C., on May 31, 2007 during the dedication ceremony. The 40,000-square-foot complex, built near the Billy Graham Evangelistic Association, traces the preacher’s rise from farm boy to the most widely heard minister of all time, having preached the Gospel in person to more than 210 million people over his long career. (AP Photo/Chuck Burton)

Franklin Graham said in his email that there are plans underway for a new facility — a “research center building” — to go up on the BGEA site.

“It’s currently in the development stage with a plan for construction as soon as possible,” he said.

William Martin, whose “A Prophet with Honor: The Billy Graham Story” is widely considered the definitive biography of Graham, said he agrees with Franklin Graham. It makes sense, he said, to have the archives in the same place as the library.

But he has questions about the timing of the move. Martin said the archives should not have been moved until a time when they could have become available again after just a brief transition. 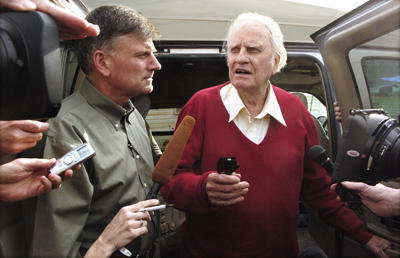 “If it’s a new facility, it would be better if it was already there,” said Martin, now a senior fellow at Rice University’s Baker Institute for Public Policy. “Research (on Graham) is probably going to be halted for a considerable time, maybe for years.”

What will happen to the archives when they first arrive in Charlotte?

Graham said Sunday that the paper records and scrapbooks “will go into temporary storage in an appropriate facility” on the BGEA grounds. The audio and video materials, he said, “will be transferred to a storage area currently in use where they will be supervised by BGEA media archive specialists.”

Lon Allison, who was executive director of Wheaton’s Billy Graham Center from 1998 to 2013, said his “bigger concern” is whether the BGEA will hire the kind of professional archivist who can expertly manage the material.

Franklin Graham’s answer: “The Graham archives will be supervised and operated under specially trained personnel with library science degrees and archival experience.” 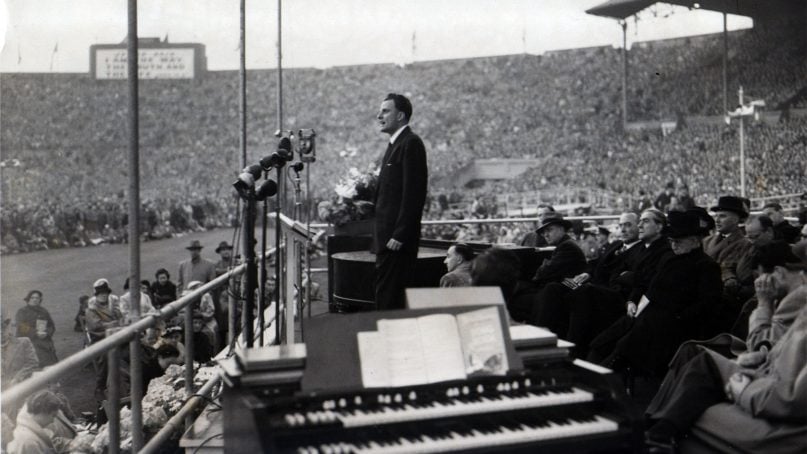 Billy Graham speaks during the closing meeting of the Greater London Crusade at Wembley Stadium on May 22, 1954. RNS file photo

Wheaton’s Billy Graham Center was established nearly 40 years ago following a late 1970s meeting in Charlotte between Graham and Leighton Ford, then a BGEA vice president and husband to Graham’s younger sister, Jean.

“I said, ‘Billy, I think we need to have a place to study evangelism,'” said Ford. “To have it in Charlotte was the thought originally. But we felt that it was important to have the proper integrity of an academic institution.”

So they chose Wheaton, sometimes called “the Harvard of evangelicalism.” Billy Graham and his wife, Ruth, marked their 50th wedding anniversary on Aug. 13, 1993. The Grahams are pictured on the campus of Wheaton College where they met and courted. RNS file photo

Ford, also educated at Wheaton, chaired the task force to develop plans for the Billy Graham Center. And at its dedication in 1980, Billy Graham shared his vision for a place that would promote both ministry and research: “I hope and pray that the Billy Graham Center will be a world hub of inspiration, research and training that will glorify Christ and serve every church and organization in preaching and teaching the Gospel in the world.”

In the years since, the center has become a welcoming and helpful place for researchers, though it also enforced sometimes strict BGEA rules about getting permission to quote and copy some materials.

Randall Balmer, a professor of American religious history at Dartmouth University and the author of “Evangelicalism in America,” was among several scholars interviewed who gave the center’s research arm high marks: “The people running it are very responsive and take seriously their stewardship of the materials.”

Even into his 90s, Billy Graham continued to take an interest in how Wheaton was managing his archives, reported Grant Wacker, a retired Duke Divinity School professor who authored “America’s Pastor: Billy Graham and the Shaping of a Nation” and the forthcoming “One Soul at a Time: The Story of Billy Graham.”

“The next to last time I saw Billy, he specifically asked me about the archives and how they were doing,” Wacker said. “He really did care about his legacy.”

The Charlotte library has become one of the country’s top Christian tourist spots, drawing 214,000 visitors last year. A recent trip to the library, which is located off Charlotte’s Billy Graham Parkway, turned up auto tags in the parking lot from 18 states and Canada. 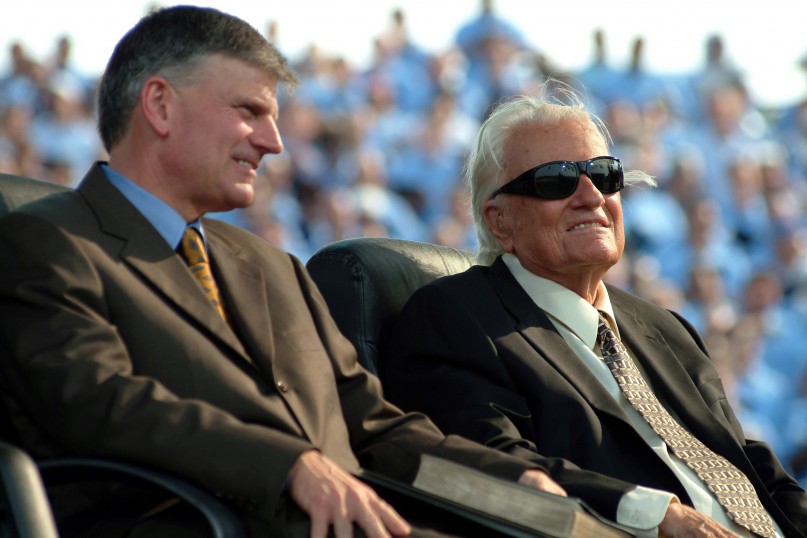 Evangelist Franklin Graham with his father, Billy Graham, at the elder Graham’s final crusade in New York in 2005. Photo by Michael Falco

Shaped like a barn as a nod to Billy Graham’s beginnings on a Charlotte dairy farm, the library is not a place for scholarship. In Ruth’s Attic, the library bookstore named for Graham’s late wife, customers won’t find those authoritative biographies of Graham by Martin and Wacker on any of the shelves.

“I’m not seeing either one of them in our inventory,” said the bookstore clerk, who instead recommended Graham’s autobiography, “Just as I Am.” The bookstore has many copies of all of Billy Graham’s books, as well as Franklin Graham’s latest, “Through My Father’s Eyes.”

While the younger Graham has remained dedicated to promoting his father’s story, some scholars said he also seems to want to freeze-frame Billy Graham’s legacy in the 1950s. Back then, the evangelist was much more of a fire-and-brimstone preacher than in his later years, when he stressed love over judgment and cooperation instead of confrontation. 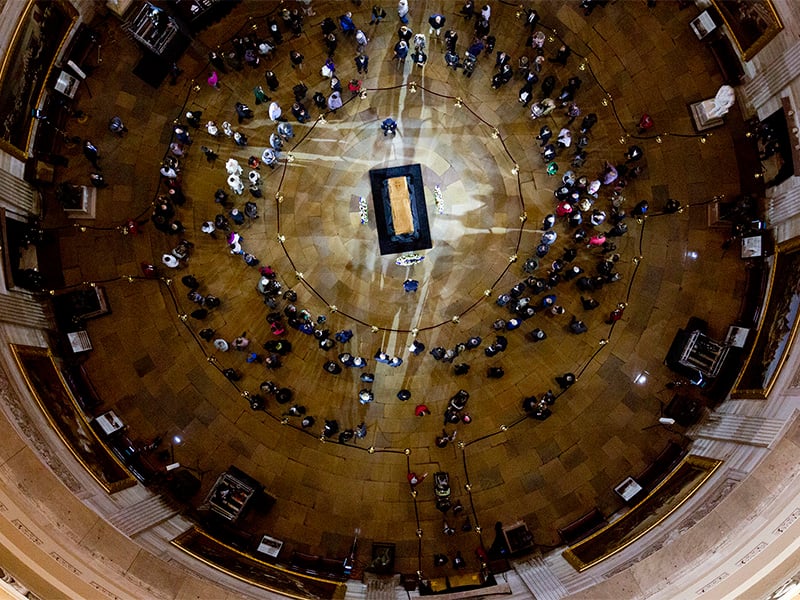 Visitors pay their respects as the casket of Billy Graham lies in honor at the U.S. Capitol Rotunda in Washington on Feb. 28, 2018. It’s a rare honor for a private citizen to lie in honor at the Capitol. (AP Photo/Jose Luis Magana)

In late March of this year, Franklin Graham, who did not attend Wheaton College, announced in a press release that moving his father’s archives from Wheaton to Charlotte would be “part of our continuing consolidation in Billy Graham’s hometown.”

The move doesn’t mean Wheaton’s Billy Graham Center will be without archives. Nearly half of its collections are not related to Billy Graham.

Still, Wheaton’s Blumhofer said it was a sad day at the college that helped shape the young Billy Graham when news of the impending move finally came.

“I know that it was a decision that was dreaded,” she said.

But the move has come, and Franklin Graham said Sunday that his father would want his archives to end up in Charlotte.

“My father had long desired for his materials to be part of the larger Library complex and operations in Charlotte,” he said in the email to RNS.

News
Anne Graham Lotz: ‘I just have to follow the Lord and what he’s called me to do’
Follow us on Facebook!
Submit your photos to RNS